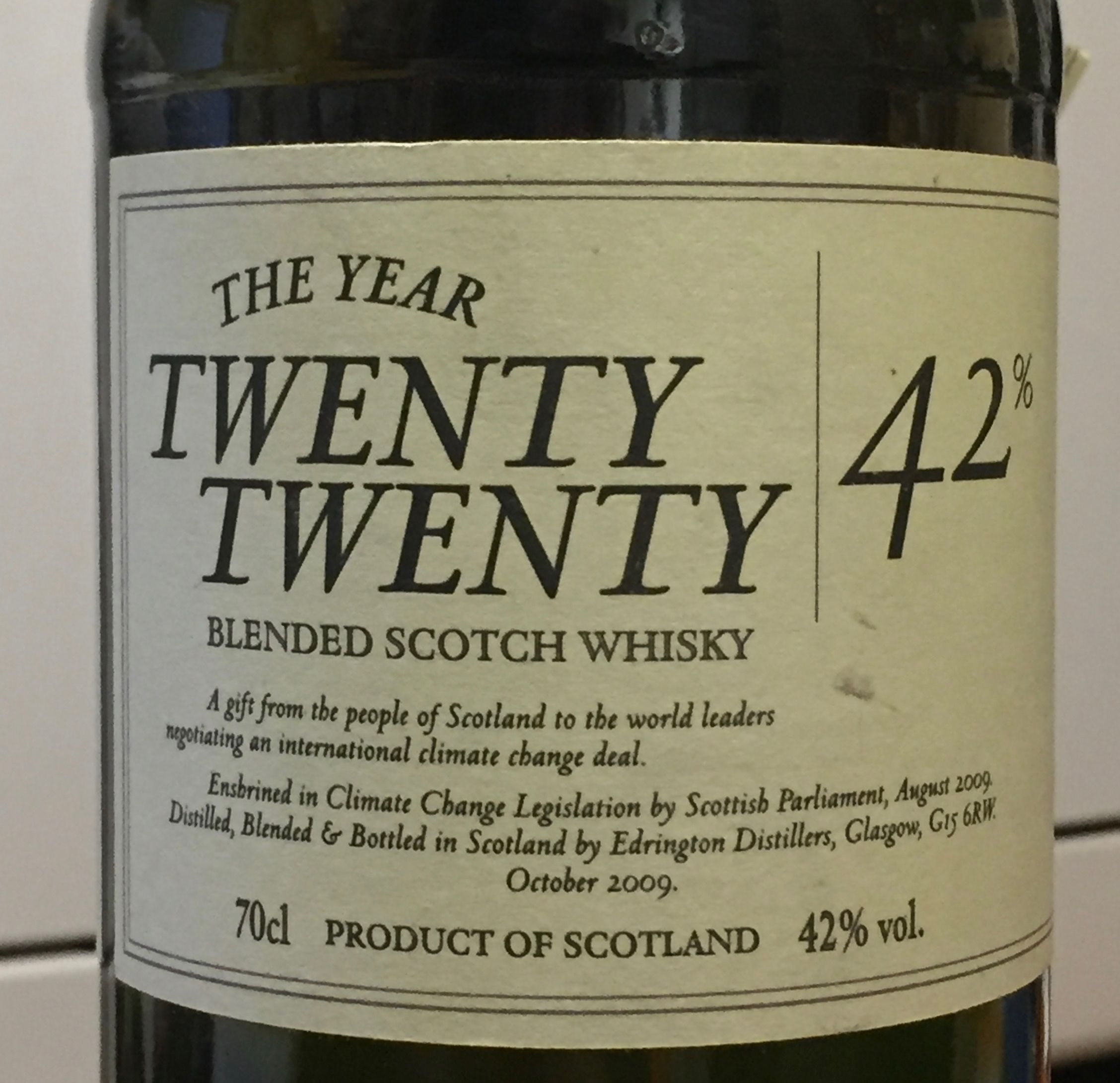 I have a bottle of 42% alcohol ‘Twenty Twenty’ whisky sitting on a shelf at home. It is quite safe because I don’t like whisky. It is a reminder of the Copenhagen climate talks in 2009 when the world tried and failed to do a new global deal on climate change. That had to wait another six years for the Paris Agreement.

In the run up to the Copenhagen talks a group of us where wondering how to publicise the fact that Scotland had just set what seemed like very tough targets, including a 42% reduction in emissions by 2020. The world was certainly in need of good examples and the 2009 Climate Act provided one.

We created rather nice badges with a saltire and the message 42% by 2020 and handed them out by the thousand to official delegates and activists alike in Copenhagen. We got interested press coverage where we could.

But we also made whisky. The idea originated from my time at the G8 meeting at Gleneagles in 2005. I saw that journalists were being given goody bags with shortbread, tartan pencils and whisky miniatures.

Once I had established that whisky does actually get as strong as 42% alcohol we knew it might be possible to create something which would communicate our Scottish targets in a uniquely Scottish way.

Mike Robinson, chair of the Stop Climate Chaos Scotland coalition, was the one who actually made the idea a reality, persuading Edrington Distillery to make 470 bottles of Twenty Twenty whisky, with a label carrying the message “Please share Scotland’s ambition, protect the most vulnerable, act fair and fast. We have made the commitments, will you?”

I took it to the G20 Finance Meeting in St Andrews in November 2009 and made sure the ministers had a bottle each, from Alastair Darling to Christine Lagarde, now President of the European Central Bank.

We shipped hundreds of bottles to the Copenhagen talks and found multiple ways to get it into the hands of people from California Governor Arnie Schwarzenegger and actress Daryl Hannah to actual Presidents and Prime Ministers. We gave some to the Scottish Government, and the First Minister presented it to important people he was meeting, so much so that the Government started to think that it was their idea.

Did it make a difference? It is impossible to tell. It certainly gained us press coverage, drew attention to Scotland’s strong climate targets and injected something humorous into talks that were otherwise going very badly.

In 2009 targets of 42% by 2020 and 80% by 2050 were worth trumpeting loudly because they were about the best in the world, even if there was no plan proving we could actually meet them. Yet here we are at the end of 2020 and this year Scotland is very likely to have beaten the 42% target (although we won’t know for 18 months and we’ve moved to a better way of calculating the results which will make comparison with the targets from the 2009 Act complex).

We are now aiming for a 75% reduction by 2030, with a detailed plan on how to get there about to be debated by MSPs. Cheers.