The Supreme Court has ordered the UK Government to draw up new air pollution plans by in the culmination of a legal battle brought by environmental campaigners ClientEarth against the Government for breaking air quality laws. Glasgow was specifically named as one of the places where healthy air standards are not being met.

This landmark victory for the right to breathe clean air should force a clean up in the many parts Scotland where air quality legal limits continue to be broken.

Air quality policy is a devolved issue and the Scottish Government is currently consulting on new air quality plans (have your say on them at foes.do/LowEmissionStrat).

It is crucial that the Government heeds yesterday’s ruling and implements its findings within the development of its new clean air plans – it too is bound by the judgment and bound to implement the legal requirements.

Here are the main points we have identified from this ruling. (Please note that these aren’t all the points which formed the “ratio” of the case, that is, the binding rationales for the decision, but rather, we’ve included the most interesting remarks made by Lord Carnwath in his judgment):

The Supreme Court found in favour of the appellant, ClientEarth. It issued a mandatory order for the Government to prepare new air quality plans in accordance with legal criteria and before 31 December 2015. (paragraph 35)

(2) Lord Carnwath reminded us that the UK Government admits that in Scotland air quality laws are being broken in Edinburgh, Dundee, and Aberdeen as well as in Glasgow: 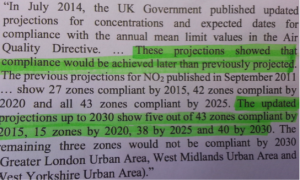 The Court cited a submission by the Government which showed that dates for compliance with the air quality laws are in 2020 for 15 zones which include Central Scotland and North East Scotland and 2025 for 38 zones, which include Glasgow – i.e. 10 and 15 years behind the original legal deadline. This means there is a breach of Article 13 of the Air Quality Directive in respect of Edinburgh, Aberdeen, and Dundee and not just in Glasgow. (paragraphs 4, 20)

(3) Lord Carnwath reminded us that the limit values set out under the Directive remain legally binding:

(4) Lord Carnwath observed that because most Nitrogen Dioxide air pollution comes from traffic, spending money on effective transport measures is a key priority:

(5) The new action plan will need to demonstrate that it can keep the length of time that the deadline for legal limits of Nitrogen Dioxide is broken “as short as possible”:

The Court ordered that the new plan be prepared under Article 23(1) of the Air Quality Directive, which requires,

“air quality plans shall set out appropriate measures, so that the exceedance period can be kept as short as possible. The air quality plans may additionally include specific measures aiming at the protection of sensitive population groups, including children.”

The Court noted that whilst in this instance it had not been called to interpret exactly what “as short as possible” means in this case, the court may have to revisit the matter if it was an issue in the future. It noted earlier European judgments which indicated that it would be unlikely to argue impossibility to completing compliance with the air quality limits as soon as possible on economic or practical grounds. (para 33)

(6) The air quality action plan should comply with criteria set down in European law if they are to be good enough (paragraph 25).

(7) The new air quality action plans will be open to judicial review (paragraph 25).

Read more of our reaction here