Our Access to Environmental Justice Campaign picked up pace last week as we dropped by the Scottish Parliament to hand in our petition asking the Parliament to investigate the barriers people face when they try to take an environmental case to court. 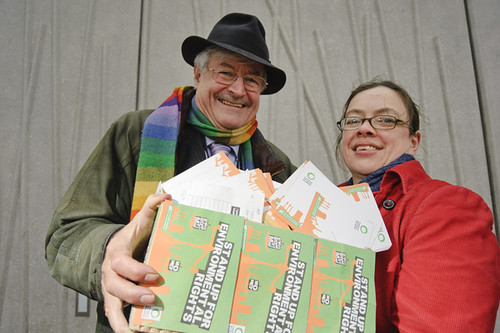 Alongside your name on the petition was that of stand up comedian Frankie Boyle, author Iain Banks, as well as top lawyers, academics and organisations including SCVO and RSPB Scotland.

One of the key barriers that people face in challenging decisions that affect their environment is the possibility of paying tens of thousands in costs if they lose their case.

To illustrate this we set up a miniature ‘scales of justice’ outside the Parliament, weighed down by money on one side, with lego people representing the voices of the petition demanding change on the other. Our campaign aims to tip the scales of justice back in favour of people and communities.

The Public Petitions Committee will formally consider our petition on 7th December, and hopefully call on the Scottish Government to take action –

we’ll update you on the outcome.

More pictures of the stunt

Watch a video of the stunt

In the meantime we are busy preparing for our Open Inquiry where we will gather experts and stakeholders to discuss how to improve access to environmental justice in Scotland. If you want to come along, to contribute or just listen in. Register online

Find out more about the campaign