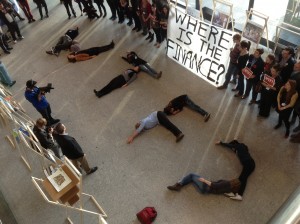 It is a process infamous for its breath-taking use of acronyms and today the UN climate negotiations acquired a new one: WTF.  CAN protestors took to the floor of the conference centre to spell out a thought that has perhaps been on the mind of many UNFCCC observers – where is the finance?

It is a crucial question for COP19. While developed nations have promised $100bn per year by 2020 for climate finance, little of this money has actually materialized.  When Ministers meet tomorrow it’s an issue that must be clarified.

At SCIAF, we believe climate finance is a matter of justice for those living in poverty. And at a conference this week, co-hosted by our Catholic development network, CIDSE, delegates from Africa, Asia and Latin America spelled out the urgency of the problem. If poor communities are to adapt to the impacts of climate change and to develop on a low-carbon path, predictable financing is urgently needed.

Father D’Souza, Director of Caritas India and SCIAF partner, posed another question – ‘what happens when countries can’t adapt? Who pays for the damage then?’ Typhoon Haiyan has reminded us of the horrific human cost of extreme weather and today the World Bank reported on the enormous economic costs.

As Yeb Sano, the Filipino representative to the COP, continued his fast, the issue of loss and damage remains a key theme here, with NGOs and developing countries calling for it to be a pillar of the negotiations along with mitigation and adaptation.

Ban Ki Moon announced the date of his 2014 ‘ambition summit’ today and of course it is ambition – or more correctly, a lack of it – that remains central to most conversations here. Somewhat unusually at the CIDSE conference it was EU Commissioner Connie Hedegaard who urged NGOs to increase our ambition ahead of the global deal in 2015.  Politicians, she insisted, must be pushed to take action.

Sharing the panel with the Commissioner was Scottish Minister Paul Wheelhouse and in our meeting with him today he explained how he was trying to raise ambition amongst other delegations. While the Scottish climate targets remained ‘challenging’, he explained, the Government was in no doubt that strong action on climate was morally right.

Civil society has a key role to play in promoting this change, but what is needed is real political courage and leadership. The lack of ambition does not lie with civil society – only in those with the power to make change happen.