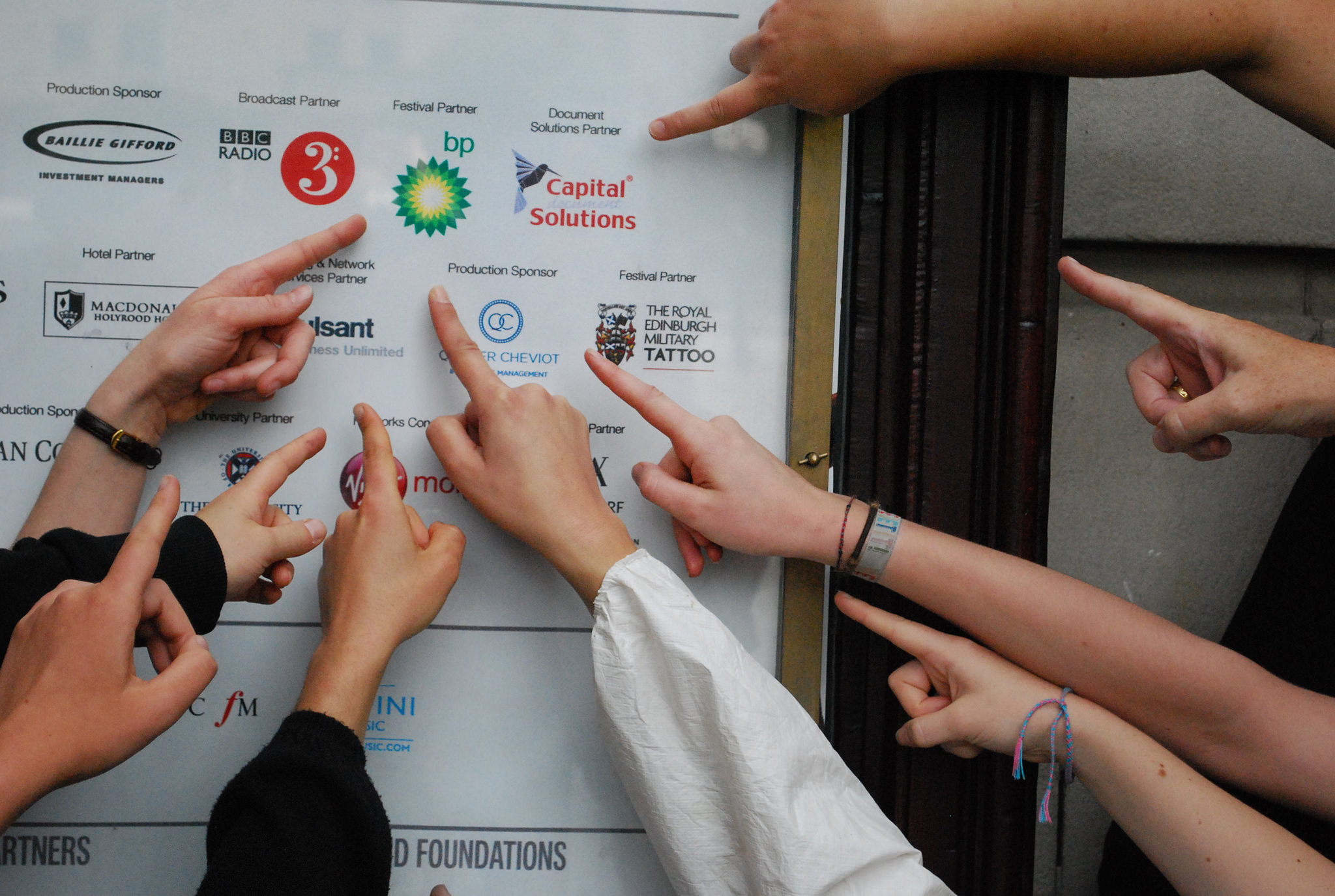 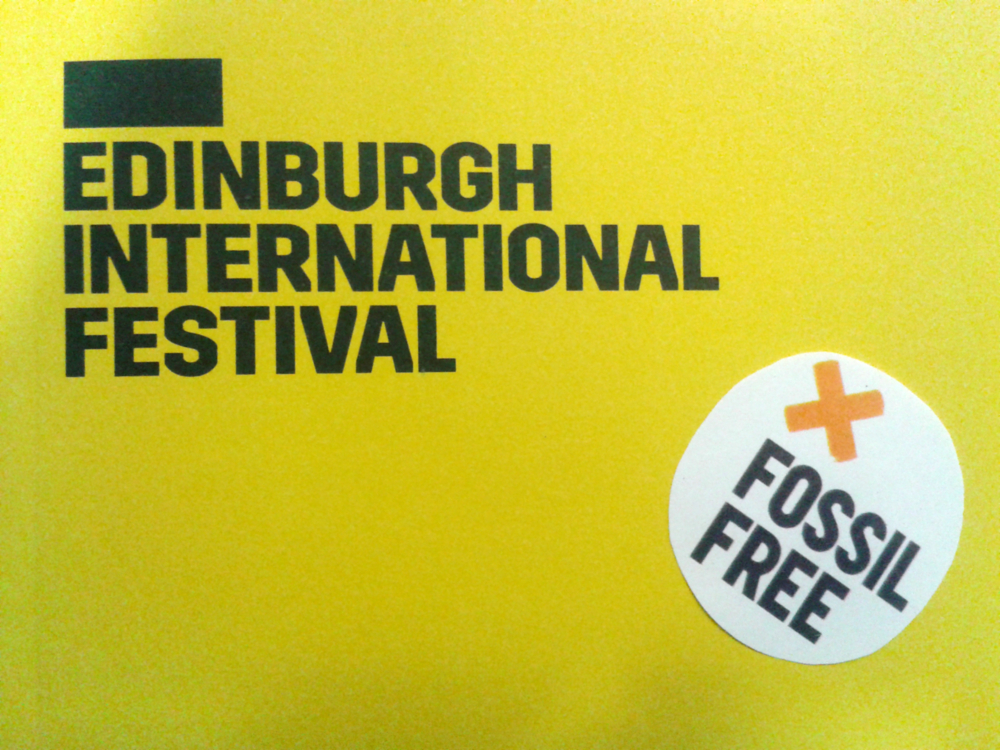 It was announced today that the Edinburgh International Festival (EIF) is no longer taking sponsorship from BP: a great victory which draws to a close an inspiring 10 month campaign.

The EIF’s shunning of BP means the Festival is now completely free of any fossil fuel sponsorship. How did this happen?

In August 2015 theatrical protest company BP or not BP? performed a flashmob theatre piece outside the Edinburgh International Festival’s centrepiece venue, the Usher Hall followed by an invasion of the Festival’s headquarters.

BP or not BP? formed in 2012 to oppose BP’s sponsorship of the Royal Shakespeare Company. Their protest at the EIF focused on the news that, after being fined a total of $23.2 billion for its role in the Gulf of Mexico disaster, BP had officially become the world’s biggest corporate criminal.

A short film was made of the performance at the EIF and distributed to supporters. 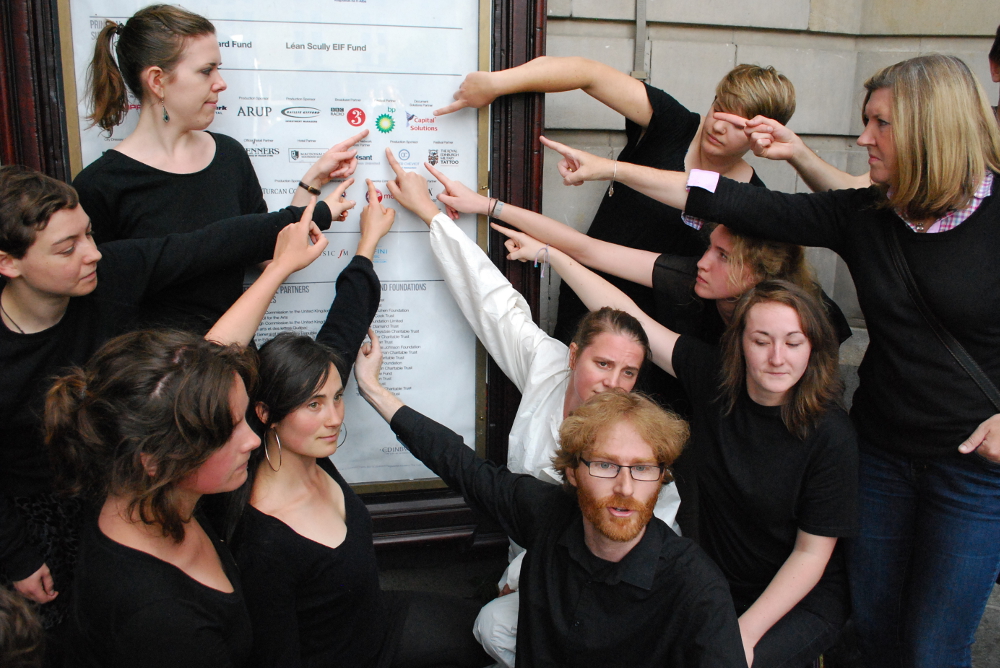 EIF star Simon McBurney said in the Times: “The arts don’t need to be involved with fossil fuel sponsorship. We live in a society run by fossil fuels, but that’s not sustainable. We have to take responsibility and ask where this money is coming.”

Playwright Caryl Churchill, said: “Oil companies use theatres, museums and galleries to improve their image and lobbying power. Tobacco companies used to do this until arts organisations decided they didn’t want to endorse something that caused death. Now it’s time to stop promoting fossil fuels, an even more disastrous future killer.”

One EIF worker, Emilie Tricarico, vowed to continue the campaign, gathering signatures for a letter to the Festival’s Director and launching a public petition.

Gilberto Torres, who is taking BP court over alleged human rights abuses, joined the campaign in October 2015 (pictured below, centre). 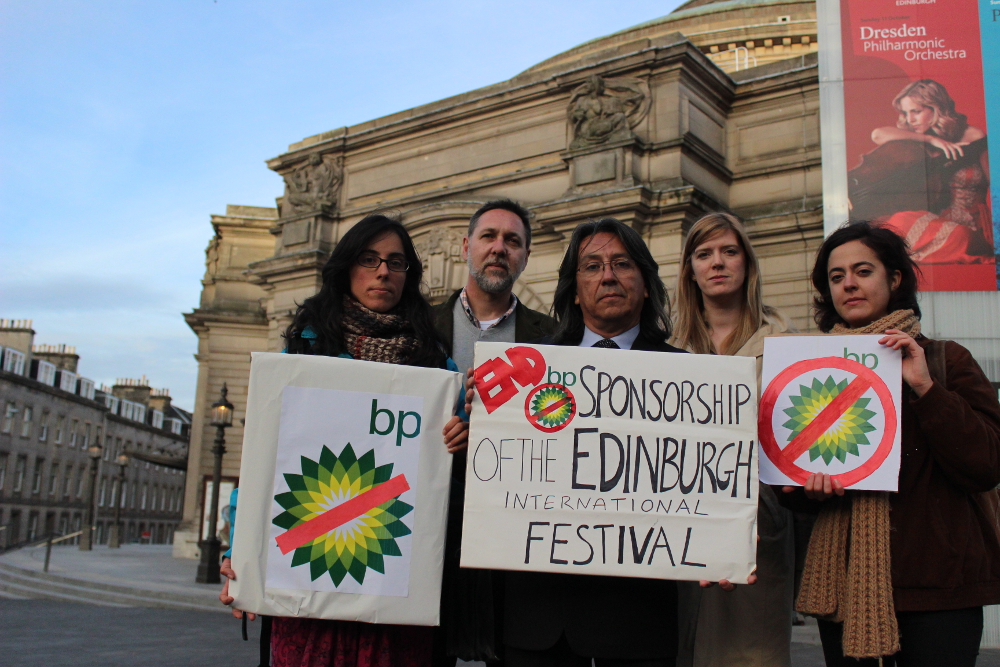 As a trade union leader Gilberto was kidnapped and tortured by paramilitaries who have testified that they were sent by oil company BP’s business partner in Colombia. He is taking them to court in London, and visited Edinburgh as part of War on Want’s Oil Justice Tour.

In December campaigner Emilie Tricarico led a meeting with the Director of the Edinburgh International Festival presented him with the signed letter and petition.

Just a few months later it is announced that, after 34 years, BP will no longer sponsor the Edinburgh International Festival.

The EIF 2016 programme was revealed today and BP was absent from the sponsors list. The end of the relationship was confirmed by the EIF via twitter.

This comes less than a month after BP and London’s Tate Gallery announced they were parting company after 26 years.

The Art Not Oil coalition continue to call for all cultural institutions and artists to make a stand against climate-wrecking sponsors.

Elsewhere in Scotland campaigners have turned their attention to BP’s sponsorship at the Scottish National Portrait Gallery, holding a theatrical protest there in February, as well pushing for public pensions, universities and churches to divest from fossil fuels.

By going completely fossil free the EIF gives leadership which other institutions can follow.

Amanda Grimm from BP or not BP? Scotland said today: “The world is shifting away from fossil fuels, and we believe that arts and cultural institutions, as trend-setters and forward-thinkers, should be at the forefront of this vital shift.”

Friends of the Earth Scotland Fossil Free campaign wants to set Scotland on course to be fossil free within a generation. Find out more at www.fossilfree.scot.