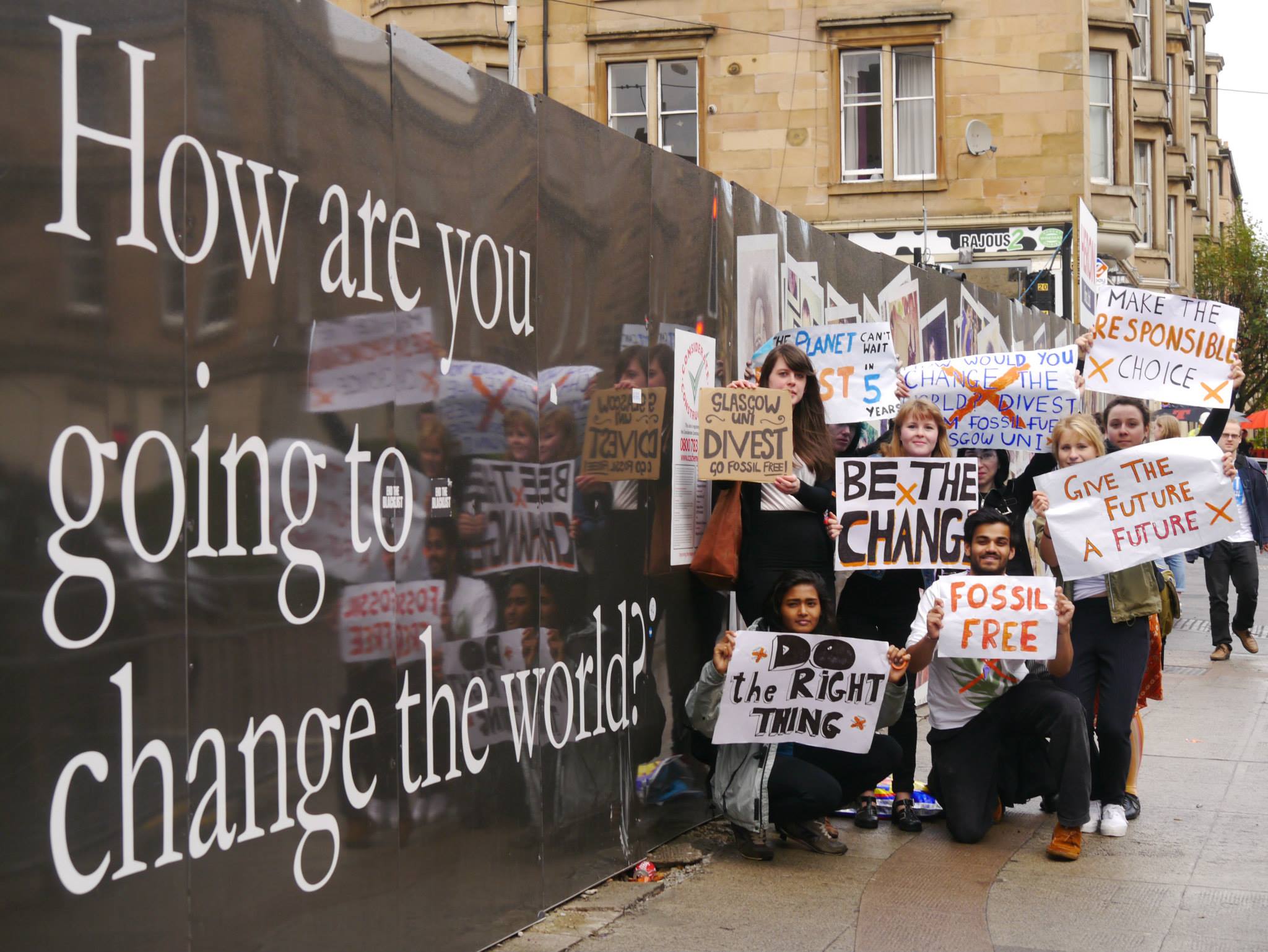 October 2014. It’s a cold morning in Glasgow and the start of a new academic year. Most students are in class – or in bed. But Živilė Mantrimaitė and a small group of activists are on a mission, sneaking around the University’s iconic Gilbert Scott Building looking for places to hide.

“We were looking for a strategic place for a student occupation in case of a negative decision. Some of us were probably even secretly looking forward to that!” says Mantrimaitė.

The occupation would never happen. Gathered together in a cafe the activists received the news: by vote of the University Court, Glasgow is to be the first University in Europe to commit to divest from fossil fuels.

Miriam Wilson, another member of campaign group Glasgow University Climate Action reflects: “When I got the call with the news of Glasgow Uni becoming the first university in Europe to divest from fossil fuels… it felt like we were on the tipping point of something huge.”

It’s hard to disagree with her. Since Glasgow’s pioneering move, 76 UK higher education institutions have announced they would withdraw their investments from fossil fuel companies, just shy of half of all UK Universities, according to student network People & Planet. At the eve of Glasgow University’s decision divesting institutions were valued at $50 billion US – today that number has exploded to over $9 trillion.

The University’s decision came off the back of many months of concerted campaigning. Wilson: “I remember our first day gathering petition signatures dressed in wacky homemade dinosaur costumes. It was so silly and fun.” The petition became central to their campaign which was backed up stalls, flyering and events, including a high-profile formal debate. By the time they handed it in they had the support of over 1000 students and staff: “When we handed in our petition to the university chancellor we wrote the names from our petition onto a piece of string and tied them around the historic university cloisters.”

In response the University set-up a working group to produce recommendations. Activists provided them with a 200 page dossier of evidence to back up their demand, a remarkable achievement in of itself.

Mantrimaitė recalls: “I remember putting all the university work aside, skipping lectures and staying in the library late nights – not to finish assignment papers – but to do some research or discuss some possible lobby or gathering support plan.”

The paper and the petition did their magic and the University’s working group recommended a complete end to fossil fuel investment. When this was endorsed by the Court the campaign was won.

Despite the headaches and late nights, Mantrimaitė remembers their campaign fondly: “Lots of hard work and also lots of fun.” Wilson says “I made some amazing friends through the campaign group who I’m still in touch with to this day. And I learned so many skills and gained so much confidence every time I took on a new challenge with the campaign.”

The campaign gave the students the chance to learn and share new skills, something which has clearly left its mark. Wilson, who went on to work for campaign groups People & Planet and Greenpeace says the campaign “absolutely changed my life.” Mantrimaitė went on to work for Young Friends of the Earth Europe: “I learnt a lot during this campaign: organising groups, events, working in teams, lobbying – all of that I’m still using till now.”

After their historic victory the students did not rest on their laurels. They turned their attention to the local government, starting a campaign to divest the multi-billion pound Strathclyde Pension Fund – partly out of a desire to connect student activism with the City around them.

Mantrimaitė still feels making these connections are vital. “Growing polarisation in politics and individualism is pushing climate change debate down below off the top priorities. Brexit, migration, ‘security’ are being pushed way higher by the far-right politicians, governments and media. We need to mobilise in a way that brings people together.”

Five years on there are questions as to just how far the University of Glasgow has come. They scored poorly on the People & Planet League and have made slow progress in selling their fossil fuels shares. Whilst hundreds of other funds have divested, many have not.

Wilson is philosophical about the challenge ahead. “I feel really proud to have been involved in the beginning of this massive movement – but divestment is just the first step. As we continue to strike, blockade, and shut down infrastructure, we need to continue to expose and oppose the power and influence of the fossil fuel industry to make progress on climate action.”