Care about Clean Air, Walking and Cycling? Then save these dates…

Home > Care about Clean Air, Walking and Cycling? Then save these dates…
2nd March 2016

Spring is about to Spring, and there are plenty of exciting walking and cycling events around the corner. Here are three for your diary….

(1) Saturday 5th March, all day event, Free Walking and Cycling Campaign Training in
Glasgow – hosted by “We Walk, We Cycle, We Vote” 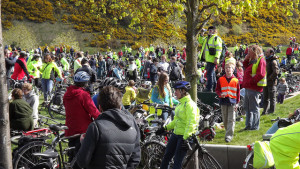 Pedal on Parliament 2015. Photo thanks to COWRIN

Last week the Scottish Budget was passed with twenty times more cash allocated to
new trunk roads and motorways than to walking and cycling paths, in spite of
hundreds of people across Scotland emailing the finance secretary asking him
prioritise walking and cycling following a call initiated by Spokes, the Lothian
Cycle Campaign. Read about it here

This was despite a report published by the Royal College of Physicians this week
which revealed that 40,000-50,000 people across the UK die early each year from
outdoor air pollution, mainly due to traffic, up from earlier estimates of 29,000
early deaths. This means that in Scotland, between 2,500 – 3,500 people die early
from air pollution.

Some of the organisations behind the call for greater active travel spending have
exciting events coming up. Here are some dates for your diary:

(1) Saturday 5th March, all day event, Free Walking and Cycling Campaign Training in
Glasgow – hosted by “We Walk, We Cycle, We Vote”

Gear up to campaign for walking and cycling with a free training day! Join brilliant
campaigners in Glasgow on Saturday 5 March for a day of inspiration and practical
tools to help you take action.

The event will be organised by “We Walk, We Cycle, We Vote”, a joint campaign
supported by a wide range of organisations across Scotland calling on all candidates
for the next elections to support greater investment, infrastructure and safety for
walking and cycling

For more details and how to register, visit
http://walkcyclevote.scot/training-day-saturday-5th-march/ 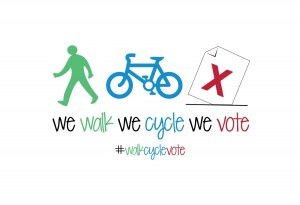 This will be of most interest if you live in the Lothians. Spokes, the Lothian Cycle
Campaign, is hosting a hustings event. Come and quiz Holyrood candidates on what
they will do to improve cycling if elected to the next Parliament. 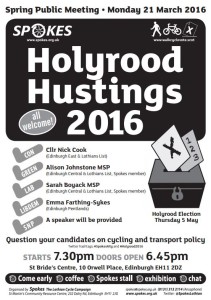 This is no doubt THE cycling event of the year in Scotland so put the date firmly in
your diary!

Thousands of people will walk and cycle from the Meadows Park in Edinburgh to
Holyrood to present a united front to our politicians and to put active travel on
the agenda for the next five years in Scotland. Last year, thousands of people
Pedaled on Parliament and this is the biggest show for active travel in Scotland all
year round – so save the date! You don’t need to cycle either – you call always
“Pedestrian on Parliament.”

Photo thanks to Patrick Down