Church of Scotland gets divesting 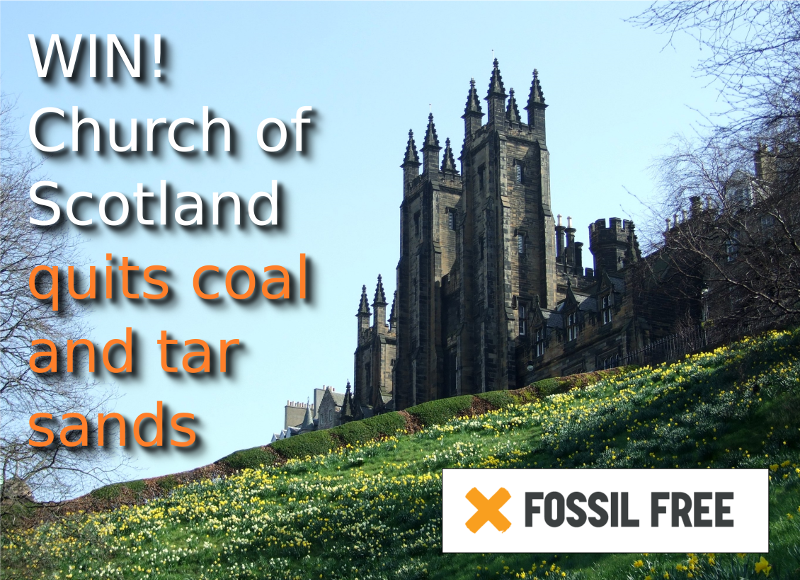 In May the Church of Scotland voted to stop investing in energy companies causing the worst climate pollution: producers of tar sands, a highly destructive form of oil extraction, and coal.

A petition begun by Church of Scotland members calling for total divestment from fossil fuels received almost 3,000 names in just over three weeks.

“We are delighted that the Church of Scotland has decided to divest from coal and tar sands companies.

“This follows last year’s decision of the United Reformed Church in Scotland to fully divest from fossil fuel companies, and marks a significant first step in aligning its investments with its moral responsibility to take action on climate change.”

Newly elected MSP Ross Greer campaigned on the issue as a member of the Church of Scotland’s National Youth Assembly. He said:

“The Church of Scotland has been at the forefront of campaigns on everything from tax dodging to tackling climate change. Our faith compels us to act when we see injustice and that should be no clearer than in the case of the fossil fuel industry.

“This isn’t just about giving future generations a planet worth living on; millions of people are being affected by climate change today and they are not the people who have caused it. The Church is rightly campaigning for climate justice but we must start by ensuring our own house is in order and divest from fossil fuels.”

You can read more about the decision in our press release and on the Church of Scotland website.