The newly launched “Cleaner Air for Scotland” Strategy claims that it will ensure Scotland has the cleanest air in Europe. But it does not spell out what impact its 43 proposed actions will have on air quality and the actions on transport are mostly restatements of already existing commitments which have so far failed to deliver clean air to date. Today, the Scottish Parliament will debate a motion tabled by Sarah Boyack MSP on air pollution. This presents an opportunity for the Government to sharpen up its commitments on how clean air will be delivered across Scotland as soon as possible. If it does not promise anything beyond what’s already in the Strategy, people living in urban areas will be forced to breathe in a toxic soup of dirty air for years to come.

Air pollution is causing a public health crisis in Scotland. There are 32 Pollution Zones across Scotland where Councils have declared that levels of pollution are breaking Scottish safety standards which were due to be met years ago. Toxic fine particles cause 2000 early deaths annually and cost us over £1.1billion in days lost at work and costs to NHS Scotland.

Today’s invisible pollution is caused mainly by road traffic. The Government therefore needs to commit in today’s debate to getting polluting traffic off our roads by investing more in walking, cycling, public transport networks, and rolling out a network of Low Emission Zones in our most polluted towns and cities.

“Cleaner Air for Scotland” introduces a new safety standard for fine particles, which is welcome. But it fails to lay out in detail how the new and existing standards will be met. 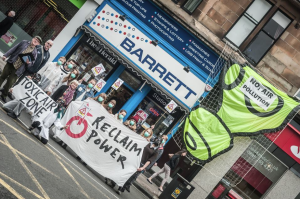 Specifically, the Strategy contains barely any new measures which will make cycling, walking, and using public transport more attractive travel options. It restates existing policies around getting people walking and cycling rather than announcing anything new. It promises a bunch of new reviews around public transport rather than committing now to increased funding for green buses or advances in smart ticketing technology. It contains no commitment to measures to discourage car use such as parking charges or 20mph zones.

There is discussion in the Strategy about introducing Low Emission Zones, which would restrict the most polluting vehicles from city centres, but a very vague timetable for their implementation. Officials have indicated an ambition to see Low Emission Zones by 2018, which we would welcome, but this commitment needs firming up.

Local councils also need reassurance that they will receive funding from central Government to deliver Low Emission Zones and other sustainable transport initiatives. Otherwise, it will be clear that the Scottish Government is not taking its moral obligation to protect our health seriously enough, and is leaving the real heavy lifting of achieving clean air up to local councils.

Delivering clean air for Scotland will mean significant savings for our health service, further strides towards meeting our climate commitments and making our towns and cities more enjoyable, attractive places in which to live, work and play. It is good that we’ve finally got a strategy but what we need now is real action.

An edited version of this Blog appeared in The National on Wednesday 18th November.