While negotiations continue inside the conference centre today, outside many thousands of people are taking to the street of Lima, on human rights day, in the World March in Defense of Mother Earth.

From the well-documented atrocities of fossil fuel companies like Shell in the Niger Delta to the murders of indigenous people defending their rainforest and livelihoods here in Peru, the links between human rights and climate justice are stark and grim. 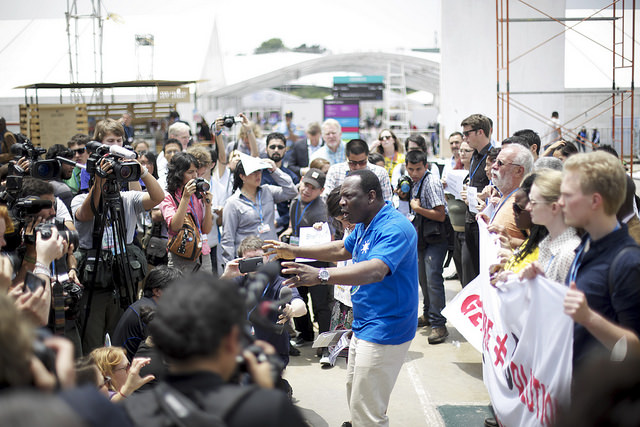 The UN Climate Convention which sets the framework for the current negotiations recognises and makes provision for another critical link between climate change and human rights. ‘Common but differentiated responsibility’ – the recognition that the burden of responsibility for tackling climate change sits heavier on those countries who are most responsible for the historical emissions that have brought the climate to the brink – is enshrined in the Kyoto Protocol, the international agreement to curb emissions up to 2020 (the Paris deal is for emissions post 2020).

In effect this recognition of the climate debt owed by rich to poor nations requires countries in the global North to do more to mitigate climate change, and assist Southern countries to adapt to the impacts (as well as stem their own emissions), through the provision of finance and sharing of technology.

Talk of an ‘optimistic mood’ in Lima must be taken with a very large pinch of salt indeed when this core principle is undergoing concerted attack by developed countries. Any optimism is unlikely to be shared by representatives of those countries already experiencing the effects of global warming and ever more extreme and unpredictable weather, living with the consequences of 20 years of feet dragging by rich polluters.

The two papers approach taken by the co-chairs in Lima – one decision paper on mitigation only, a second paper on elements for negotiations in Paris (finance, adaptation, loss and damage, technology, transparency i.e. everything else) – appears to be an effort to pave the way for an outcome in Paris based on emissions reductions only.

Removing mitigation from the context of the other elements and taking forward these discussions without reference to questions of historical responsibility and capacity to act would destroy any hope of a fair and just deal in Paris. This is the key fight inside negotiations in Lima, and one that is being taken up vigorously by developing countries, particularly the Africa Group.

Meanwhile, the key fight outside the talks is far simpler, but equally challenging: stopping new fossil fuel projects. In a world where big energy companies have 5 times as many fossil fuels on their balance sheets as it would take to tip the climate over the critical 2o warming threshold, its pretty clear we need to leave most of them in the ground.

In recent years Scotland has led the way amongst developed nations, recognising its moral responsibility as a historical polluter to tackle climate change, not only by passing the most ambitious Climate Act in the world, but also establishing a Climate Justice Fund to assist vulnerable nations.

A good start, but not enough. Our fair share of the climate effort means not only having a great Climate Act, but putting in place effective, funded policies to meet the targets in it. It means transforming our energy system to renewables and phasing out fossil fuels entirely by around 2030. It means weaning ourselves off north sea oil, and it means stopping fracking in its tracks. If the Scottish Government wants to show true leadership on climate, that’s the challenge that lies ahead.