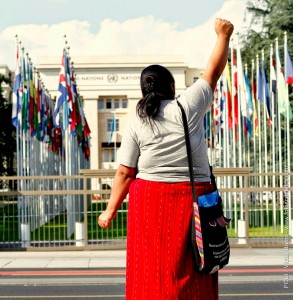 One week before world leaders gather in New York for their Climate Summit, Friends of the Earth International warns that the September 23 ‘talking shop’ will only see leaders fiddling with flimsy pledges instead of committing to binding carbon reductions.

“A parade of leaders trying to make themselves look good does not bring us any closer to the real action we need to address the climate crisis. This one-day Summit will not deliver any substantial action in the fight against climate change,” said Dipti Bhatnagar, Friends of the Earth International Climate Justice and Energy coordinator.

“World leaders are falling far short of delivering what we need to truly tackle climate change in a just way. Their flimsy non-binding pledges in New York will do little to improve their track record. What we urgently need are equitable and binding carbon reductions, not flimsy voluntary ones,” she added.

On September 21, hundreds of thousands of people including Friends of the Earth International members and supporters will march in New York, London, Edinburgh, Amsterdam and many other cities around the world to demand climate justice, standing with climate and dirty energy-affected communities worldwide.

Last week the World Meteorological Organization warned that atmospheric levels of greenhouse gases hit a record in 2013 as carbon dioxide concentrations grew at the fastest rate since global records began.

The impact of increasingly common extreme weather events, such as flooding, droughts and hurricanes, are devastating the lives and livelihoods of many millions of people.

Climate change is directly responsible for the deaths of hundreds of thousands of people per year, most of whom live in poorer countries.

Without immediate action, climate change will certainly get worse and could pass a dangerous tipping point where it becomes both catastrophic and irreversible.

The 195 States that signed the United Nations Framework Convention on Climate Change (UNFCCC) recognise that rich, industrialised countries have done the most to cause climate change and must take the lead in solving it, and provide funds to poorer countries.

But developed countries’ leaders are neglecting their responsibilities to prevent climate catastrophe. Their positions are increasingly driven by the narrow economic and financial interests of wealthy elites, the fossil fuel industry and multinational corporations.

Friends of the Earth International demands a total phase out of carbon emissions by the middle of this century in order to reverse current warming trends and minimize the chance of irreversible damage and possible runaway climate change.

NASA scientist James Hansen and others have spotlighted the need to return to 350 parts per million (ppm) of carbon dioxide (CO2) or lower to preserve the planet and its people. The sharing of this burden must be based on historical responsibility, capacity to act and access to sustainable development in order to enable a just global transition.

Friends of the Earth International believes that industrialised countries must urgently commit to reducing their emissions domestically – without false solutions such as offsets – in line with what science and equity demand.

There are real solutions to the climate crisis. First among them is the reduction of greenhouse gas emissions. Reductions must be agreed through a legally-binding agreement at the UNFCCC that is in line with what science and equity demand.

We also need clean sustainable community energy – the right for people to have access to energy; to decide and own their sustainable energy sources such as wind and solar and sustainable consumption patterns.

Friends of the Earth International also supports the call for a Financial Transactions Tax – or Robin Hood Tax – as a source of climate finance. Funds are urgently needed for clean, sustainable community energy and adaptation to climate change in developing countries.

Dipti Bhatnagar, Friends of the Earth International Climate Justice and Energy coordinator.
A version of this article was originally published on www.foei.org

——–
Click below for more information on Scottish events to demand climate justice.

Check this map for other events in Scotland

Sign up to take part in our fight against climate change