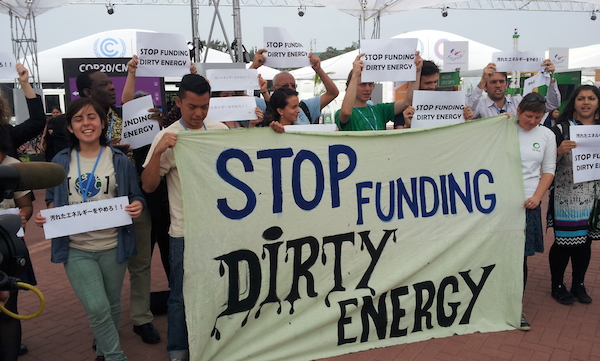 As I write, I’m on my way to the UN climate summit in Lima, Peru. I’ll be joining colleagues from Friends of the Earth organisations and climate justice allies around the world to bring a strong civil society voice to the negotiations.

The United Nations Framework Convention of Climate Change (UNFCCC) negotiations are a tortuous, slow-moving process, still nowhere near a deal that responds to climate science over 20 years after world leaders agreed on the need for urgent action.

Flawed as they may be the UN climate talks are the best process we have, the most democratic place to decide on a course of action to tackle the most serious threat faced by humanity.

And the stakes are terribly high. Last years’ talks began in the aftermath of Typhoon Haiyan – the most powerful and devastating typhoon ever to hit the Philippines, with a death toll of over 6,000 and over 4 million made homeless. The Philippines Environment Ministers first speech on arrival at the conference was powerful and angry: “I am beginning to feel as though we are negotiating on who is going to live and who is going to die.” Today, Philippines authorities are organising evacuations in the same areas Haiyan hit and bracing themselves for the category 5 Typhoon Hagupit expected to arrive this weekend.

Much has been made of the USA-China deal, struck ahead of the talks in Lima, to curb emissions by 2025 and 2030 respectively. But while this move signals some political progress, the cuts on offer by the worlds biggest polluters are nowhere near what climate science requires, and a mere fraction of climate justice demands.

All this might seem rather glum (to put it very mildly). But actually it isn’t too late to avoid catastrophic climate change if only the political will were there to take the decisions needed. Like leaving fossil fuels in the ground and transforming our energy systems to clean, community owned renewables for a start. That’s why the voices of communities directly affected by dirty energy projects and those struggling to build a clean future need to be heard loud and clear on the streets of Scotland and throughout the world in the year ahead of Paris.

Building the foundations in Lima for a strong deal in Paris is vital – we need to ensure important issues like equity, climate finance, loss and damage are firmly on the negotiating table, and dangerous distractions like carbon markets and voluntary pledges are off.

But change will only happen inside the negotiations when our voices outside are too loud to ignore.

Sign up to keep in touch with our climate news.

Road to Paris: What do the EU, USA and China pledges mean for other countries?