Arrived in Warsaw on Friday afternoon as the first week of the annual climate talks was drawing to a close. 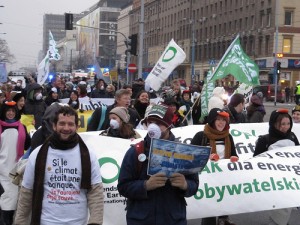 Sadly it seems that despite the disastrous but impeccably timed Super-typhoon Haiyan, and Philippines’ negotiator Yeb Sano’s challenge “to anyone who continues to deny the reality that is climate change, I dare you to get off your ivory tower and away from the comfort of your armchair”, so far rich countries seem to be trying to out-do each other in the climate inertia stakes.

Australia managed to earn itself three ‘fossil of the day’ awards within 4 days, first by announcing that it would not commit any new finance, then for tabling legislation to repeal domestic climate laws and finally for obstructing negotiations on loss and damage – one of the most critical streams of discussion at this COP. This drew support from Japan, who then went on to cut it 2020 emission reduction targets so much that what they are now offering is essentially a 3.1% increase on 1990 levels. Canada – who pulled out of the Kyoto Protocol in 2011 largely because of the impossibility of meeting targets with a booming tarsands industry – has been criticised for encouraging other countries to back down on commitments, while the USA are impeding progress on climate finance.

The Polish Government also earned this ignoble award for a string of reasons, but particularly for hosting an international coal summit during the COP (more on this on Monday) and for being the first country to allow corporate sponsorship into to the talks.

This is only the second COP I’ve ever been to, and I never actually got inside Copenhagen’s Bella Centre in 2009, but I am assured by those who did that it is not normal to see a BMW in a glass box as you approach registration, nor to see delegates lolling about on (admittedly comfortable) funny red seats covered in Emirates Airlines, nor conference brochures littered with logos of underground coal gasifiers Linc.

Big business has always had access to the climate talks, but the sense of corporate capture is stronger than ever. The energy, motor, aviation and all the other industries seeking to influence the outcome of the COP are not climate deniers, they know its for real, but they also know that the solutions will challenge their business models and their profits.

If that all sounds a bit glum, its also perhaps to be expected, but there is still time for things to pick up in week two when Government Ministers start arriving, and crucially, still time before targets have to be agreed under the Durban Platform at COP-21 in Paris, 2015. 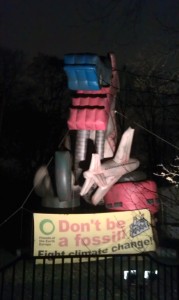 To sign off an a more positive note, despite a lack of any serious mobilisation effort for this COP, despite reduced passes for observers, and despite a series of incidents with far right groups, civil society has had a strong and positive presence in Warsaw all week. Actions have highlighted corporate high-jacking of the COP, youth getting de-badged and fasting in solidarity with Yeb Sano, and today, we marched together in a big, vibrant, peaceful System Change not Climate Change rally. What do we want? Climate Justice! When do we want it? Now!

More photos from the demonstration here.

What you can do: sign this petition to show your solidarity with the Philippines