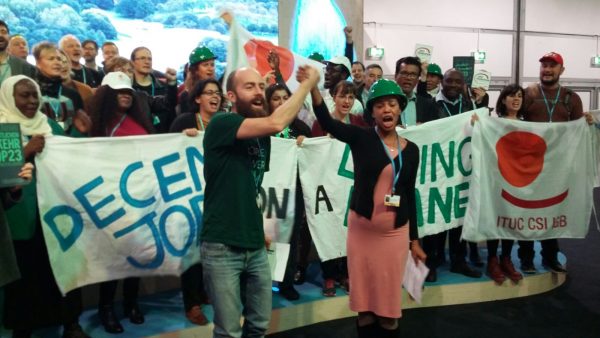 Working together for a just transition away from fossil fuels

Although the issue doesn’t feature on the official agenda, the 23rd United Nations climate talks, hosted by Fiji, and held in Bonn, is being dubbed ‘the Just Transition Conference.’

While the official negotiations focus on contentious issues of the implementation of the Paris Agreement – in a process where historic and current global injustices are always strongly present – numerous side events, plenary interventions and press conferences are highlighting the need for action to ensure that workers and communities dependent on high carbon industries are not left behind in the move to zero-carbon economies.

The trade union crafted concept was cemented in the 2015 Paris Agreement’s preamble, which calls for “a just transition of the workforce and the creation of decent work and quality jobs” in the context of urgently needed emissions reductions and adaptation to the impacts of climate change.

What is particularly exciting and inspiring about this surge of activity is the diversity and strength of the movement coming together to call for a just transition. Environmentalists and trade unions may be perceived as unlikely bedfellows. But what unites us is ultimately stronger than any differences, and that is our shared recognition of the gravity of the climate crisis and our shared desire for justice. As the International Trade Union Confederation (ITUC) starkly puts it, there are no jobs on a dead planet. Clearly that is something we should work together to avoid.

On Sunday, Friends of the Earth International and the ITUC held a joint event in Bonn where we heard from a diverse panel of speakers about some of the challenges as well as some of the success stories. From questioning whether multinational corporations could ever deliver the kind of transformative change needed to respond to the climate crisis – is it really credible to think of Shell turning around, cleaning up its dirty work in Nigeria and delivering renewable power to the people without being compelled to? – to celebrating emerging success stories of planned transitions from coal to renewables for workers in Australia, there was plenty to reflect on.

Scotland was among those examples, its recently announced Just Transition Commission hailed as an example of the climate leadership the world so badly needs right now.

However, at this stage there is very little detail about what the Commission will do, beyond the brief reference in the recent Programme for Government: the new Just Transition Commission will “advise Scottish Ministers on adjusting to a more resource-efficient and sustainable economic model in a fair way which will help to tackle inequality and poverty, and promote a fair and inclusive jobs market.”

Not a bad starting point, but we need to put some flesh on the bones: who will sit on the Commission, and what will it actually do?

First of all it is clear that the membership of the Just Transition Commission must include trade unions, workers, communities and environmentalists. Its remit must be linked to the delivery of the 5-yearly Climate Change Plans which detail how Government intends to meet its legally binding emissions reductions targets, and the Plan itself must explain how policies and proposals will impact on employment and include measures to support workers. There must be a focus on the creation of decent jobs in low carbon sectors including transport, renewable energy and energy efficiency.

The Commission will not be effective if it is pigeon-holed as a climate change initiative: it must have a cross-portfolio purview, particularly with Economy, Jobs and Fair Work. It must also have a clear link to the work of the new Scottish National Investment Bank, another welcome proposal in the recent Programme for Government.

As the climate crisis that once seemed like a far-off thing that a future generation would have to deal with starts to make itself felt in the present, the world is at a crossroads. This is decade zero in the fight to limit global warming to a level at which our planet can still sustain human life. The transition to a low carbon economy will no doubt happen one way or another, but if it is left to market forces it will be a painful transition. Scotland has seen unjust transitions in the past – with the closure of coal pits in the 1980s tearing up the social fabric of communities, many of which still suffer from the consequences of the way in which that transition was mishandled. We have the chance to do it differently this time. Let’s take it, and use this opportunity to build a fairer, more equal Scotland at the same time.

Mary Church is the Friends of the Earth Scotland Head of Campaigns.
A version of this article appeared in The Scotsman on Wed 15 November 2017.