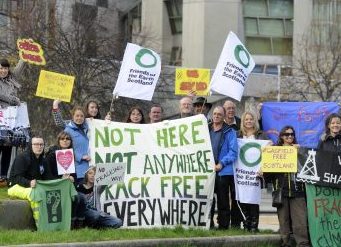 Why we are going to court to protect the fracking ban 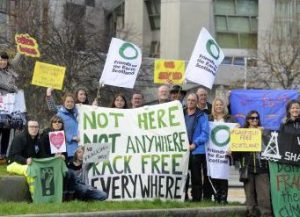 The ban on fracking announced by Scottish Ministers in October last year was a truly momentous win. Six years of powerful grassroots action by campaigners and communities on the frontline of the industry put fracking to the top of the political agenda – highly unusual for an environmental issue – and led first to a moratorium then to an ‘effective’ and ‘indefinite’ ban.

Three months later INEOS announced it was taking the Scottish Government to court to challenge the ban. That INEOS should make such a move was not exactly a surprise: the company owns or has the majority interest in the key fracking licenses in Scotland’s central belt. The ban also poses a real threat to realising its numerous assets south of the border, since it clearly helps the case of communities organising to oppose INEOS’s plans to frack across large parts of England. Nor is the company exactly shy about going to court to get what it wants: last year INEOS won a high court injunction against anti-fracking campaigners, and is currently gearing up to take the National Trust to court to force the charity to allow access to its land for seismic surveys.

It is not the first time that Ministers’ decisions have landed them in court, and there’s no doubt that the Scottish Government will fight this case with everything it’s got.

But we decided to get involved in the judicial review because of the critical importance of the fracking ban in the fight against climate change. This ban represents the first time that Scottish Ministers have said no to a fossil fuel because of, amongst other things, its impact on global warming.

INEOS is both challenging the legality of the ban and suing for compensation due to an alleged breach of its human rights.

In our intervention we argue that not only is the ban on fracking lawful, but that the Scottish Government is arguably required to ban fracking in order to meet Scotland’s legally binding climate change commitments. There is simply not enough space in our share of the world’s atmosphere, or within the legally binding targets set out in Scotland’s Climate Change Act, to go after new sources of fossil fuels like fracked gas. We also set out the case for the fundamental human right to a healthy and safe environment, and that fracking may breach this.

Our involvement in the case is by way of a public interest intervention – a written submission to the court – that provides information on relevant Scottish and EU environmental laws, and international obligations on climate change. We had to apply to the court for permission to do so, and were delighted to be given the go ahead: public interest interventions in the Court of Session are rare, and this is the first time such an intervention has put forward arguments in defence of the environment.

The court case is due to be heard in May, though it could be some time before a ruling is made. Even then, either side could appeal the outcome leading to potentially several years in court before a final judgement on the legality of the ban and the issue of compensation is given. This means a worrying time in particular for frontline communities who fear what a win in court for INEOS would mean for their health and livelihoods.

We hope the court takes on board the crucial points we are raising, and that our intervention on climate change helps it come to the conclusion that the fracking ban must at all costs be upheld.

Legal interventions are expensive and time-consuming. Any donation you can make to support our work is greatly appreciated.