Protestors with placards welcomed the parties and witnesses to the Public Local Inquiry into Dart Energy’s proposals for Coal Bed Methane this morning at the Inchyra Hotel (lovely view of the petrochemicals plant out the back). 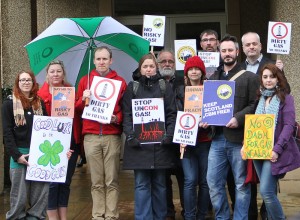 The BBC and STV came and filmed and a number of newspapers covered the kick off of three weeks of evidence and cross examination in the first public inquiry in the UK to examine unconventional gas.

Dart Energy are represented by a QC, lawyers and expert witnesses.  Falkirk and Stirling Councils are represented by their lawyers.  Concerned Communities of Falkirk and ourselves complete the people sitting at the official tables.  The two Reporters sit at the head of the room, against an impressive wall of files.

Today’s subjects were geology, hydro-geology, water treatment and leakage of methane, but we started the day with a rather surreal argument about whether a particular gas well existed.  Prof David Smythe, in his evidence for the community, mentioned problems with this well, but Dart’s witness was due to say it had never been drilled, the argument was over whether a document from the Department of Energy and Climate Change, which proves that it does indeed exist, could be discussed …

In a day of listening to evidence and asking questions of Dart’s expert, we found that on the proposed water treatment plant, they couldn’t actually say how much gas they expected would be flared or vented off.  We also learnt that this plant would produce a tankerload of toxic sludge a day.  Experts flatly disagreed on whether methane could leak or not leak through faults.  Another expert said venting of methane might only happen once every 10 years, although Dart’s permissions from DECC lets them vent the equivalent of around 6,000 tonnes of carbon dioxide every year.  There was a good backwards and forwards on the secrecy of key geological data, with the public and even the Inquiry clearly unable to access the whole picture.

One of our aims in taking part in the Inquiry was to make sure people not present could follow some of what was coming out during the sessions by tweeting about interesting things that have been revealed.  By mid-morning Dart’s QC complained about people tweeting from the Inquiry.   The Reporter has asked for people not to tweet as witnesses are presenting their evidence, so we have ceased out of respect for the process.

Today we learnt that the permeability for gas through rock is measured in milliDarcy.

Tomorrow … more of the same.