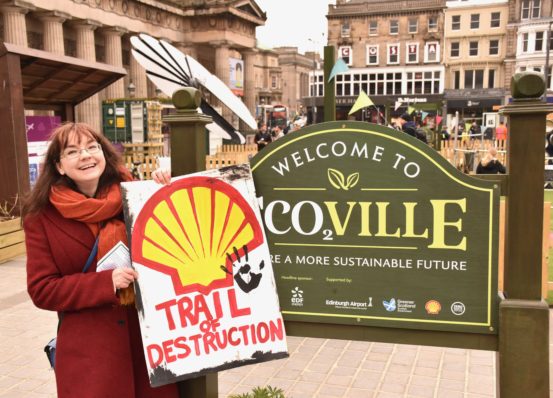 This year the theme of Edinburgh’s International Science Festival was chosen to celebrate “the wonder and diversity of life in all its forms”. However, the organisers brought some very questionable friends along to join in that celebration. The headline sponsors being the nuclear energy giant EdF, and ‘major funding partners’ including that well known paragon of green energy, Shell. Quite how the involvement of these companies fits with a festival that included an eco-village on the Mound and ‘Operation Earth’ at Dynamic Earth is a matter that was presumably left to the accountants.

As a STEM Ambassador for over twelve years I’ve become increasingly uncomfortable with some of the scheme’s commercial supporters, who include BP and BAE Systems, and justifying renewing my New Scientist subscription involves a battle with my conscience. A couple of years ago I was volunteering for the Science Festival but this year, had it not been for being confined to bed with sinusitis, I would’ve been protesting against it.

For those who don’t see the harm here it’s important to understand why sponsorship works well for these companies, because compared to actively promoting themselves to school children it’s quite subtle. Simply getting their logos on the promotional materials exploits the phenomenon of normalisation, creating subconscious associations between the branding and the theme of the festival in the minds of those for whom it doesn’t cause a serious case of cognitive dissonance. Furthermore, this passive and highly pervasive form of advertising avoids the need for putting words or, perish the thought, company representatives, out in a public forum where they might be questioned. And passive advertising certainly works – try googling it.

For me, that cognitive dissonance was particularly strong this year because the first time I took part in non-violent direct action was against Shell. Back in 1997 I was part of a network of activists who closed down petrol stations to protest against the company’s alleged collaboration with the Nigerian government in the arrest and execution of the writer Ken Saro-Wiwa and eight other leaders of the country’s Ogoni tribe. Twelve years later Shell avoided the evidence being made public in a court of law by paying out a legal settlement of £9.6m. There are clearly some forms of life Shell would like us to celebrate more than others. EdF Energy, on the other hand, is presumably keen to celebrate the diversity of the world’s elephants, as it’s busy building a very big white one at Hinkley Point.

Given that a big part of the Science Festival is about encouraging young people to choose careers in science, technology, engineering and maths (STEM) subjects it also seems strange to be promoting the fossil fuel industry as, if we are to meet our climate change targets, the size of the industry will need to be a tiny fraction of what it is now by the time those starting school now finish their degrees. And unless the next Scottish National Planning Framework is amended to allow the construction of new nuclear build the only jobs left in that industry will be in decommissioning. Those scientists and engineers of the future could of course find employment elsewhere, but then presumably the festival isn’t intended to encourage something that would add to Scotland’s skills shortage.

Yet there is another way. The Glasgow Science Festival attracts an impressive number of much more respectable sponsors, People and Planet does brilliant work engaging students, and Scientists for Global Responsibility runs the arms and fossil fuel-free Science4Society week (full disclosure: I’m a member of SGR and my university sponsors the GSF). There really is no need to blur the lines here, if the organisers of the Edinburgh event absolutely can’t afford to be picky about who sponsors a festival in one of the most iconic cities in the world then maybe it’s time to ask those accountants some other questions too. I’m all in favour of celebrating the diversity of life, but let’s do it by maintaining our opposition to new nuclear power stations, managing the decline of the fossil fuel industry, and investing in creating jobs in renewable energy for the scientists and engineers of tomorrow.

Dr Keith Baker is a researcher in energy policy, co-editor of the recent and forthcoming books ‘A Critical Review of Scottish Renewable and Low Carbon Energy Policy’ and ‘The Long Goodbye? Managing the decline of fossil fuels’ (Palgrave Macmillan 2017 / 2018), and co-founder of the Energy Poverty Research initiative: www.energypovertyresearch.org