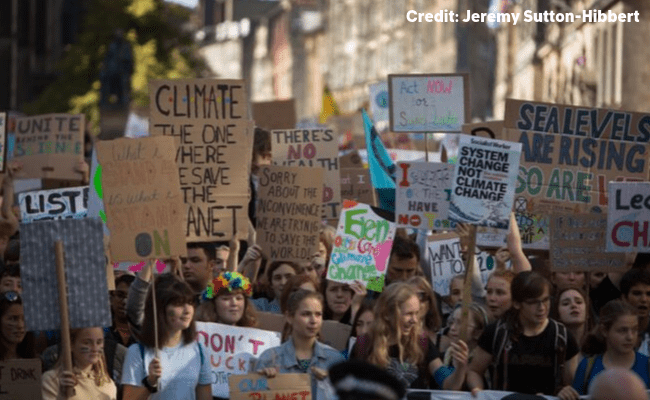 Turn the energy of #ClimateStrike into action in the Parliament

Days like today give me hope. As a person who spends their life campaigning on climate change, and not always seeing results, that can sometimes be hard to find.

The turnout across Scotland and the world in support of the youth-led #ClimateStrike is phenomenal. Millions of people took to the streets from Sydney to Shetland to Sri Lana. All of them were demanding more action from their Governments to urgently reduce climate emissions.

Today’s marches were Scotland’s biggest ever climate protests! And all organised by school children, they really are incredible. At one point in the Edinburgh march, as we were walking down the Royal Mile, I climbed up on a bollard to get a better look at the whole march – but I couldn’t I couldn’t see the beginning or the end, just a steady stream of children and parents, unit students, workers and retired folk, all marching and chanting and dancing together – united in their demands for action and their desire for a better world.

Today wasn’t a one off. It is not the end of something. It is just the beginning.
We are growing a powerful movement for climate justice, and I am so proud to be part of it alongside the youth strikers and in solidarity with people around the world.

But if we don’t act now, we risk losing momentum. We must turn today’s energy into action.

People know that we are living in a Climate Emergency, and that the poorest and least responsible are already suffering the worst impacts. Climate science couldn’t be clearer – we need a significant increase in action to cut emissions within the next 10 years.

Let’s turn that energy into action

Next Wednesday 25 September, MSPs in the Scottish Parliament will have their final vote on the new Climate Bill. This law will set our level of climate action for years to come – determining whether Scotland contributes to worsening the climate crisis, or to tackling it.

We all know what needs to happen. We’ve heard the science. But we need to make sure our politicians hear it from us.

There is a chance that MSPs will back higher targets for cutting dangerous climate emissions by 2030. But there’s also a chance they won’t. They will only do act in the right way if they feel the pressure from people like you.

The Greens, Labour and the Liberal Democrats are all backing an increase in urgent action. We don’t know what the Conservatives and the SNP will do. Will they chose to listen to the demands of the children, the people on the streets of Scotland and those on the frontline of climate impacts? Or will they continue to listen to huge fossil fuel corporations?

By sending them an email today you’ll let them know that you support the Climate Strikers and that you demand more urgent action.

Please take the time to email, or phone your MSP. After all the youth strikers have done today, it’s the least we can do.

Together, we can turn the enthusiasm and hope of the Climate Strikers into concrete commitments that will shape climate action in Scotland for years to come.

If you want to find out more about the debate in Scottish Parliament, you can check out this briefing.