Waste is another political tool used by the Israeli occupiers. The settlement of Ariel dumps liquid waste – sewage and industrial – onto Palestinian water-courses and agricultural land, making the contaminated and unworkable land easier to confiscate. In Qalqilia we saw the great mound of solid waste from 20 years of unregulated dumping of Israeli industrial and chemical waste. We heard how the toxins from this waste are leaching into the water used by nearby Jayyous and Azzun, with the resultant risk to the health of their inhabitants. 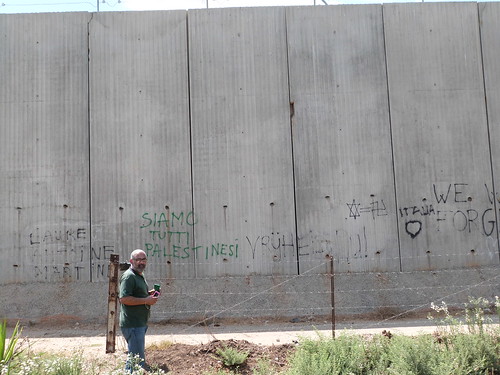 Qana is a beautiful, green valley with a series of permanent springs, which has been recognised for its conservation value by the International Union for the Conservation of Nature. It has been maintained for generations by local Palestinians who use it for livestock grazing, olive production and recreation. Israel declared the valley a military zone in 1979 and attempted to exclude Palestinians. Following protests, the military designation was withdrawn in 1982, and the Israeli occupying authorities declared Wadi Qana a ‘nature reserve’ – which involves the exclusion of Palestinians! Between 1979 and 1982, nine settlements were built around the top of the valley, which pumped raw sewage into the wadi until a pipe was installed in 2005.

In Tulkarem, in northern West Bank, there is an industrial estate with eleven chemical factories built on confiscated Palestinian land behind the separation wall. In this ‘seam zone’ between the green line and the separation wall there are no controls, and no Palestinian authority can implement restrictions. The Israeli military controls who enters and leaves the factory, which guarantees low wages, poor health, safety and environmental conditions. The industrial site was first established in 1984 when the Gishuri plastics recycling plant relocated from within Israel, where it was subject to legal action for pollution. Within the seam zone, it can pollute with immunity and has attracted other factories to the site.

In all these cases what we have seen is environmental injustice perpetrated by Israel through its occupation. It is clear that the theft of resources and pollution of land and water are designed to serve one purpose: the ongoing apartheid separation of Palestine – an environmental Nakba. 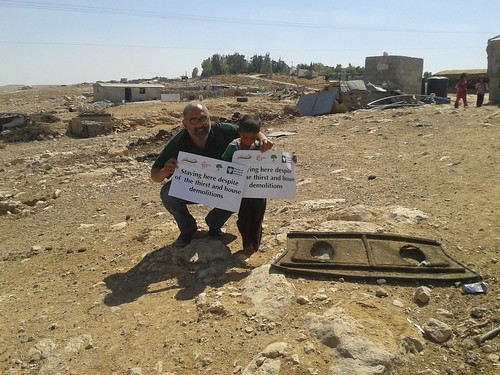 Nakba is the Arabic word for catastrophe. To call the industrial pollution, unregulated waste dumping and expropriation of resources by the Israeli occupation a catastrophe is certainly a legitimate claim. However the Nakba has a particular significance in Palestine, as the catastrophe which befell the Palestinian people in 1947-9, with the brutal expulsion of 80% of the population by Zionist militias from the area of Palestine which became Israel. The expulsion was accompanied by massacres, rapes, destruction of villages and the attempted erasure of a people who had lived there for generations, and resulted in the 1.5 million refugees currently unable to return home. It is in this context that it is possible to talk about an environmental Nakba – Israel is using environmental violations to make the land uninhabitable for Palestinians, to try to drive them from their land as the settlements expand.

The Zionist project, since its early days, has been oriented towards the ethnic cleansing of the Palestinian population to be replaced with an ethnically pure ‘Jewish state’. Environmental injustices are one more weapon being waged in this colonial project.