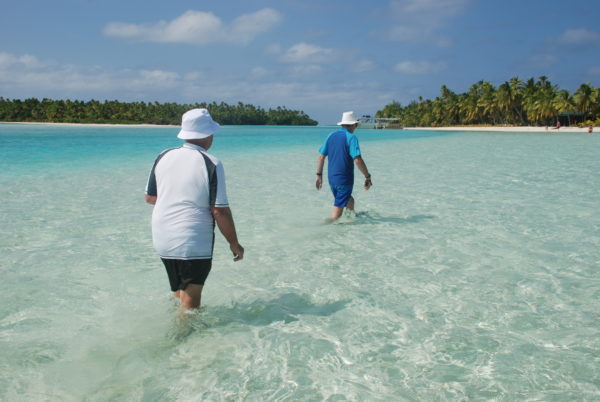 On the frontline of climate change in the South Pacific

Our volunteer Vince Fitzpatrick recently visited the South Pacific in a personal capacity. Fiji currently holds the Presidency of the UN process on climate change until November 2018, when it will pass to Poland. While there he talked to those he met about climate change and their concerns for the future.

The islands of the South Pacific stand in the frontline in the struggle against climate change. Fijian leader Frank Bainimarama chaired the recent UN Climate talks in Bonn and drew attention to the threat his and neighbouring nations face from rising sea levels and coral reef bleaching. Given that their carbon footprint is tiny, it need hardly be added that this is an unjust state of affairs. In July this year, I visited Tonga, Fiji and the Cook Islands and took a closer look at the situation.

Tonga
First port-of-call was Tonga, a far-flung group of island chains with a strong traditional culture, overlaid by devout Christianity but never subjected to colonisation. Although a couple of outlying islands have volcanoes rising to over 1,000m, most of the archipelago is flat. Nowhere is this more apparent than on the main island of Tongatapu, which is rather like a tropical version of Orkney Mainland, similar in size, topography and dependence on agriculture, fishing and tourism.

In 2017, the island was lashed by a severe cyclone, which caused widespread destruction. A year later, much of this has been repaired thanks to the strong community spirit of the islanders and generous donations from the various churches with congregations there. However, the threat remains and, on the neighbouring island of ‘Eua, I heard of several businesses which had closed, at least temporarily, in the wake of the storm. Locals fear that what were once exceptional weather events could become commonplace. I didn’t meet a single climate sceptic in a week spent there.

Rising sea levels pose a deadly threat to Tongatapu in particular. All over the island, one finds tsunami evacuation notices, which illustrate the devastation even a small rise in sea levels could cause here.

The diagram on the lower right shows the potential impact, with the area that could be submerged in blue. This includes the capital, Nuku’alofa (Abode of Love), which houses over 30,000 people, or half the island’s population, as well as the royal palace. Many of the outlying islands are in a similar position.

Fiji
Moving on, I then visited Frank Bainimarama’s homeland of Fiji. Unlike Tonga, Fiji consists of a mixture of ‘high’ and ‘low’ islands. The former are substantially hilly and rise to well over 1,000m, while the latter include small islets, often home to plush tourist resorts, which barely rise above the waves.

Even on the ‘high’ islands, though, there is cause for concern. I took a taxi from Nadi Airport to my backpackers’ hostel on the main island of Viti Levu and the driver said that he could take me to numerous places where the sea had washed away sections of coastline in recent years. Much of the population lives on or near the coast, notably in the main cities of Suva, Lautoka and Nadi and is, thus, directly threatened. As in Tonga, the 2017 cyclone hit Fiji hard.

At the hostel, I met Joe Padilla, an American diver who is working on a project aimed at restoring bleached coral reefs around Fiji. Joe’s team create a concrete base, on which they plant polyps taken from other reefs or salvaged from storm damage.

It’s a worthy effort, but Joe is pessimistic about the future. He says: “I’m still on the Coral Coast working on reefs, but it appears too much pollution, piggeries poop, plastics is in the water to promote normal growth in our nurseries.  The 10 month old fragments are deformed and mutated.  It’s like a mom that smokes and drinks during pregnancy… Nothing good will come of that.  My nursery corals should be the size of grapefruits… Not golf balls… It’s so sad. Looking for another site now, one a bit more remote with less people.”

Joe also testifies to coastal erosion, pointing-out that the number of coconut palms with fatally-exposed roots (due to loss of soil cover) has multiplied several times in recent years.

As on Tonga, I didn’t meet a single local who doubted the reality of climate change. There was considerable pride in Bainimarama’s stance on the issue at the UN talks and all Fiji Airways planes (however ironically) have UN Climate Conference logos on their fuselages.

The PM seems popular with a majority of Fijians and will probably win the upcoming elections. Many praise him for investing in infrastructure and creating jobs, but there is another side to his party’s rule. They are very much neoliberal free marketeers and believe in allowing prices to be set by the law of supply and demand. This has led to the rich getting richer and the poor poorer and I heard reports of basic food prices increasing five times since Mr Bainimarama came to power.

Cook Islands
My journey continued to the Cook Islands, a self-governing dependency of New Zealand comprising a dozen or so small specks of land in a vast area of ocean. Much of the group is ravishingly beautiful and it mostly avoided the cyclone which struck Tonga and Fiji, but problems remain.


As before, it was impossible to find a climate sceptic. On the atoll of Aitutaki, I stayed at a budget chalet run by Gina, one of the three ariki, or chiefs of the island and the de facto queen. She is deeply concerned about the future of her community. Aitutaki is some 200km away from its nearest neighbour and most of its food is supplied on infrequent cargo ships from New Zealand. With no rivers, water is obtained from rainwater tanks.

The extensive lagoon is one of the most beautiful in the Pacific and a magnet for tourists, but is vulnerable to pollution. Like Tongatapu, the land is relatively flat, with a high point of just 124m and, as a British expat on the larger island of Rarotonga told me, “in a hurricane, there’s no place to hide”.

Rubbish disposal is a major problem and most of it is burnt, leaving a pervasive odour of smoke and spreading potentially harmful chemicals over land and lagoon – there is very little land available for burial of waste and no investment for recycling plants.

Against this background, the Cook Islands have recently been offered substantial loans by China for the purpose of developing high-end tourism, part of a pattern of Chinese investment for influence throughout the region. There is widespread concern that any inability to repay the loans could lead to a loss of sovereignty, that relatively few jobs will be created for local people and that development could bring pollution in its wake. As Gina told me, the Cooks may be just specks in the Pacific but, to the islanders, they are home and a place to be cherished and defended.

A precious corner of the world faces an uncertain future.

The Scottish Government has just published their new Climate Bill which sets out targets for cutting our climate pollution. But their proposals don’t go far enough or fast enough.

Email your MSP
This site uses cookies to store information on your computer. To find out how we use them please view our Privacy Policy.Accept AllNo Thanks
Manage consent