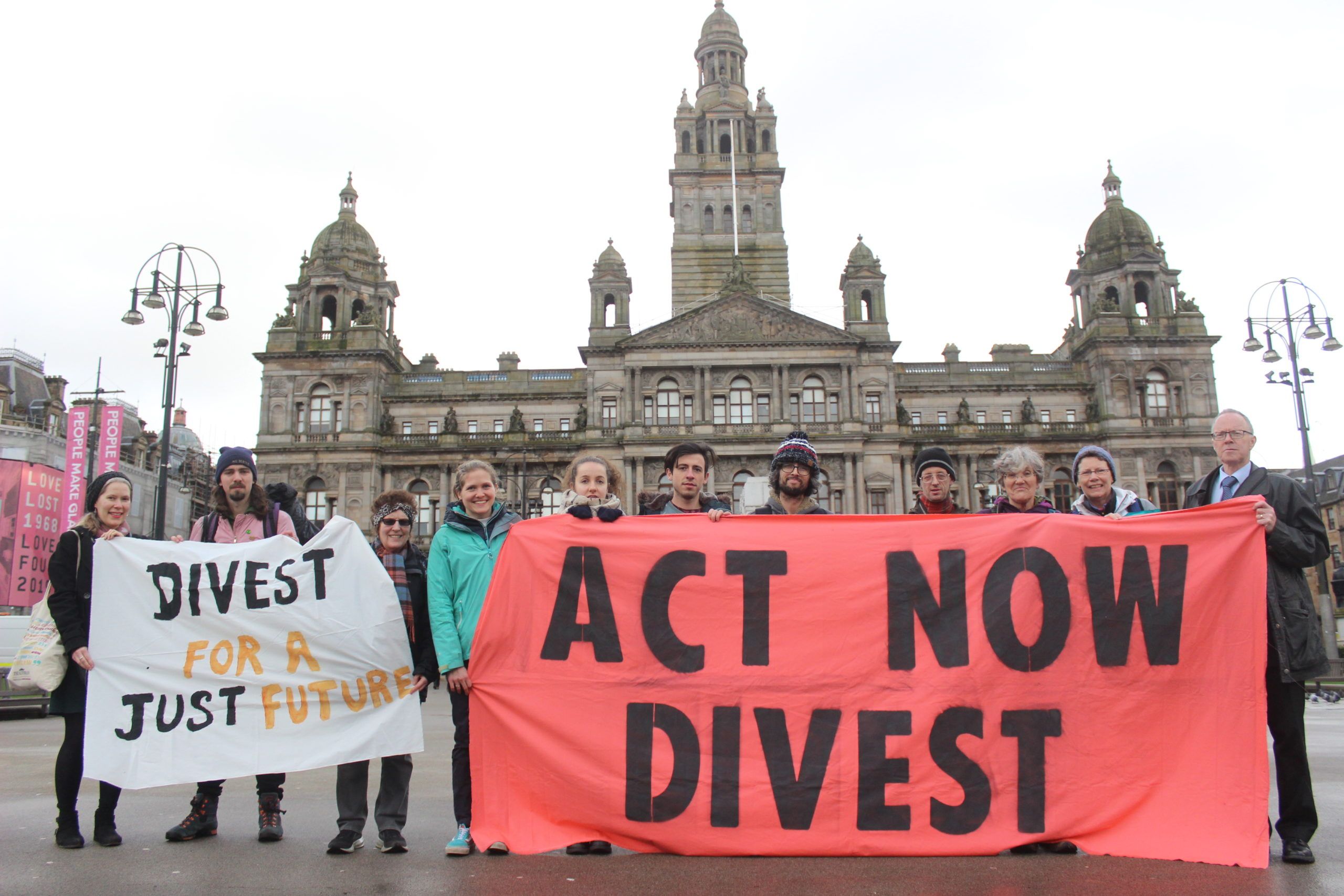 Glasgow activists have been patiently and persistently demanding their City’s pension fund get out of polluters since 2015.

This week, their campaign exploded into the limelight, and the once-solid brick wall of support for fossil fuels appeared to crack.

A ‘Climate Emergency’ working group was set-up made up of local stakeholders including Divest Strathclyde. In the Autumn the working group recommended divestment from fossil fuel companies, requiring the Strathclyde Pension Fund – run by the Council – to act.

The Strathclyde Pension Fund is the UK’s largest local government pension fund, providing pensions to thousands of public workers in the west of Scotland.

Responding to the working group’s recommendation, divestment of the fund was set to come to a head on 4 March with a meeting of the Council’s pension committee.

Ahead of that meeting Divest Strathclyde, working with Friends of the Earth Scotland, published details of the fund’s fossil fuel investments to show the scale of the problem. They found Strathclyde pensions invested an estimated £709 million in fossil fuels including many of the biggest polluters such as BP, Shell, ExxonMobil, Chevron, Total, and ENI.

Strikingly they found that the BP shares, £8 million in all, were purchased mere months after the City declared a climate emergency.

Extinction Rebellion blocked the entrance to the City chambers on Monday in protest. UNISON, the largest trade union that represents members of the Strathclyde Pension Fund, came out strongly in support of divestment too.

Their report quotes swathes of oil industry promotional material including misleading information about green energy – in reality no oil company is investing more than 5% of their capital in renewables, and all are planning new extraction projects.

Fund officers reportedly told the meeting that ‘investors know best’, shifting blame onto the users of fossil fuels, instead of extractors.

Some councillors accepted these arguments but others questioned them.

The Council is fully aware of the embarrassment they face investing in major polluters as the City attempts to green its image in the run up to hosting the United Nations climate talks in November.

Dramatically, James Corry of UNISON who represents individual fund members, was refused the right to speak on the matter and walked out.

A number of councillors made clear they were not convinced rejecting divestment was tenable, and a decision was postponed. Councillors agreed to do more research, to meet together, to investigate, and to return to the issue in September – just weeks before the UN climate summit in the City. That meeting could be quite a reckoning.

The pereod ahead could prove an amazing opportunity to lobby for change at Strathclyde.

Outside the meeting one board member reportedly told activists “the tide is turning amongst Councillors in Glasgow City Council in favour of divestment.”

“Scotland’s biggest public sector pension fund is failing to take meaningful action on the climate crisis. It has got the financial clout – over £20 billion of investments – to help turn Scotland into a green beacon of hope for the future,” reflects Margaux Marshall of Extinction Rebellion Glasgow.

James Corry of UNISON said “With the UN Climate talks coming to Glasgow in November, all eyes will be on the city to show climate leadership. We hope this major civic institution will act in the interests of current and future pensioners, as well as for the wellbeing of all, in committing to divest from fossil fuel companies.”

Email your councillor
This site uses cookies to store information on your computer. To find out how we use them please view our Privacy Policy.Accept AllNo Thanks
Manage consent