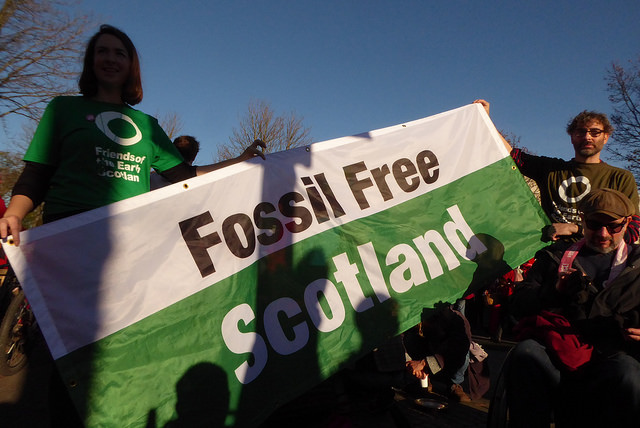 You might remember that the SNP first talked about a new Climate Bill in their 2016 election manifesto, pledging to “raise our ambition further … to implement the Paris Agreement”.

Since that pledge was made, we’ve learned that 2016 was the hottest year ever recorded while 2017 was the hottest ever without the extra warming El Niño effect. We looked on in horror as devastating extreme weather swept the globe from floods in Asia, droughts in Africa, heat waves and wildfires in Europe and hurricanes in America. The severity and urgency of the situation could not be clearer.

With the Climate Bill expected in the coming weeks, we’re anxiously awaiting its publication to see if it will indeed deliver the ambition and action needed to pull us back from the brink of the climate crisis.

In recent months we’ve seen a fantastic amount of support for Scotland to set a net-zero target, with backing from climate scientists to Scottish farmers and faith leaders, and people from climate impacted communities around the world:

“We stand to lose our homes, lose our countries, lose our identities as distinct Peoples of the Planet, lose our cultures, languages and familiar places. We do not want to be passport holders of countries that have disappeared. What happens in Europe, the US, China and Australia, for example, affects what happens climatically, in our Pacific Ocean. I hope Scotland, The Brave, will help to lead the way, through its commitment to a net zero carbon strategy and soon.”

This all follows on from last year’s show of public support where nearly 19,000 people responded to the Scottish Government’s consultation, and urged them to deliver increased action and stronger targets.

Other countries are already stepping up their ambition, with Finland, France, Iceland Portugal, New Zealand and Sweden all committed to becoming climate neutral countries by 2050 at the latest. The European Parliament voted to recommend that Europe as whole should be at net-zero by 2050. Scotland must get on board. Sweden’s climate minister Isabella Lövin recently called on countries to commit to net-zero emissions, writing “it will clearly be untenable for any western government that does not have a net zero target with an appropriate date and a means of delivering it to claim to be a “climate leader”.

But so far, the Scottish Government’s plans are too weak – proposing barely any extra action over the next decade, and only dong 10% extra in 32 years. And they don’t include setting a net-zero target.

We’re calling for the Climate Change Bill to go further, faster by setting a target of 77% emissions reductions by 2030, and reaching net-zero climate emissions (becoming ‘climate neutral’) by 2040, to do our fair share of global climate action. The Government also need to introduce the policies in agriculture, energy efficiency and transport to help deliver these increased targets.

We know that to win this, we need people power. Together, we must show the Scottish Government, and all parties in the Scottish Parliament, that there is support for climate action.

So we’re running a series of workshops and a film tour across Scotland in June to kickstart a national discussion about climate action. We’ll be talking about the impacts of climate change, about climate justice and what Scotland needs to do, and how each and every one of us can get involved in the campaign for climate action. Please join us, this one’s too big to sit out. 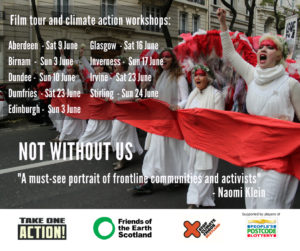