Happy (B)anniversary: One year on from the fracking moratorium

Home > Happy (B)anniversary: One year on from the fracking moratorium
28th January 2016

One year ago today, the Scottish Government took the plunge and announced a moratorium on shale gas fracking and coalbed methane. Although at the time there was 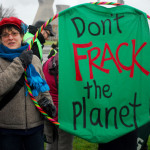 a huge amount of evidence about the detrimental impacts on health, water pollution, climate change and the poor economics of the industry to support that decision, it wasn’t an easy one to take. The lure of the US shale gas boom and its promise of cheap energy and jobs, however ill-founded, is difficult to resist in a world of short term political fixes. But as we celebrate the moratorium’s first birthday, here’s 6 reasons why fracking looks like an even worse idea than it did just 12 months ago.

1. Whichever way you look at it the Paris Agreement means fracking is a very bad idea. Last month world leaders came together and agreed on the need to limit global warming to 1.5°C but utterly failed to come up with a credible plan to do so. The science tells us that we have to decarbonise our energy systems now if we are to have any chance of avoiding the truly catastrophic warming that we are starting to get a taste of here in Scotland with the recent floods. Opening up a new frontier of fossil fuels at this critical time is a dangerous distraction from the genuine energy transformation to a fair, decentralised renewable system that we urgently need.

2. Last year after years of living with toxic drinking water, communities in Pennsylvania were vindicated after scientific research finally confirmed that household supplies had been contaminated by fracking chemicals from operations in the Marcellus Shale. Despite this, the UK Government has pushed through regulations that mean fracking could happen underneath groundwater source protection zones as well as National Parks and other special designations. Our moratorium here in Scotland is a beacon of hope to communities fighting fracking in a de-regulated England.

3. Communities still don’t want fracking and coalbed methane. In Scotland, despite the moratorium communities continue to organise and push for a ban – and an internal SNP campaign named after Tolkien’s fearsome dragon Smaug was founded to do the same within the party. Responding to enormous local opposition, Lancashire County Council refused planning permission to Cuadrilla for 4 exploratory shale gas wells in June last year. The UK Government, for obvious reasons didn’t like the decision and has called it in to re-determine the case, yet after a seemingly endless fight the community campaign shows no signs of flagging. This weekend will see protests across the UK for a National Anti-Fracking Day, including events in Edinburgh, Falkirk and Fife, in solidarity with communities south of the border.

4. Opposition to unconventional fossil fuels just keeps on growing around the world. Scotland joined a long list of countries, states and regions with temporary or permanent bans on unconventional fossil fuels. In 2015 New York State officially banned fracking, Maryland introduced a moratorium, the Netherlands extended its long-running moratorium for another 5 years and closer to home Wales and Northern Ireland voted for presumptions against the industry. In October the Scottish Government introduced a further moratorium on underground coal gasification, and the global divestment campaign has seen over 500 institutions commit to taking their money out of fossil fuels.

5. Two earthquakes at Cuadrilla’s test site near Blackpool resulted in a temporary ‘gentleman’s agreement’ to halt fracking in 2011. Recent evidence from the US suggests the threat could be much worse than feared with Oklahoma experiencing almost 1000 years’ worth of earthquakes in just two years. While the Oklahoma quakes were triggered by the reinjection of industry wastewater rather than hydraulic fracking itself, there is a big unanswered question as to what the UK industry would propose to do with the billions of litres of toxic wastewater commercial production would generate.

6. The figures don’t stack up. The economics of the US shale gas boom were questionable long before the crash in global oil prices, but for the foreseeable future, fracking is totally unviable. BHP Billiton, one of the few big players to get involved in the shale gas industry, wrote down $7bn shale gas assets this month, and it is thought that around half of the US industry could go bust. Closer to home, in summer 2015 the UK Government was forced to fully disclose a report it had previously published heavily redacted which found fracking threatened house prices. Recent research in Scotland has found the same.

For all these reasons and more, fracking is a waste of time that we cannot afford in the fight for climate justice.  Email Nicola Sturgeon now to ask her turn the current moratoriums into a ban and put Scotland on track to being fossil free within a generation.