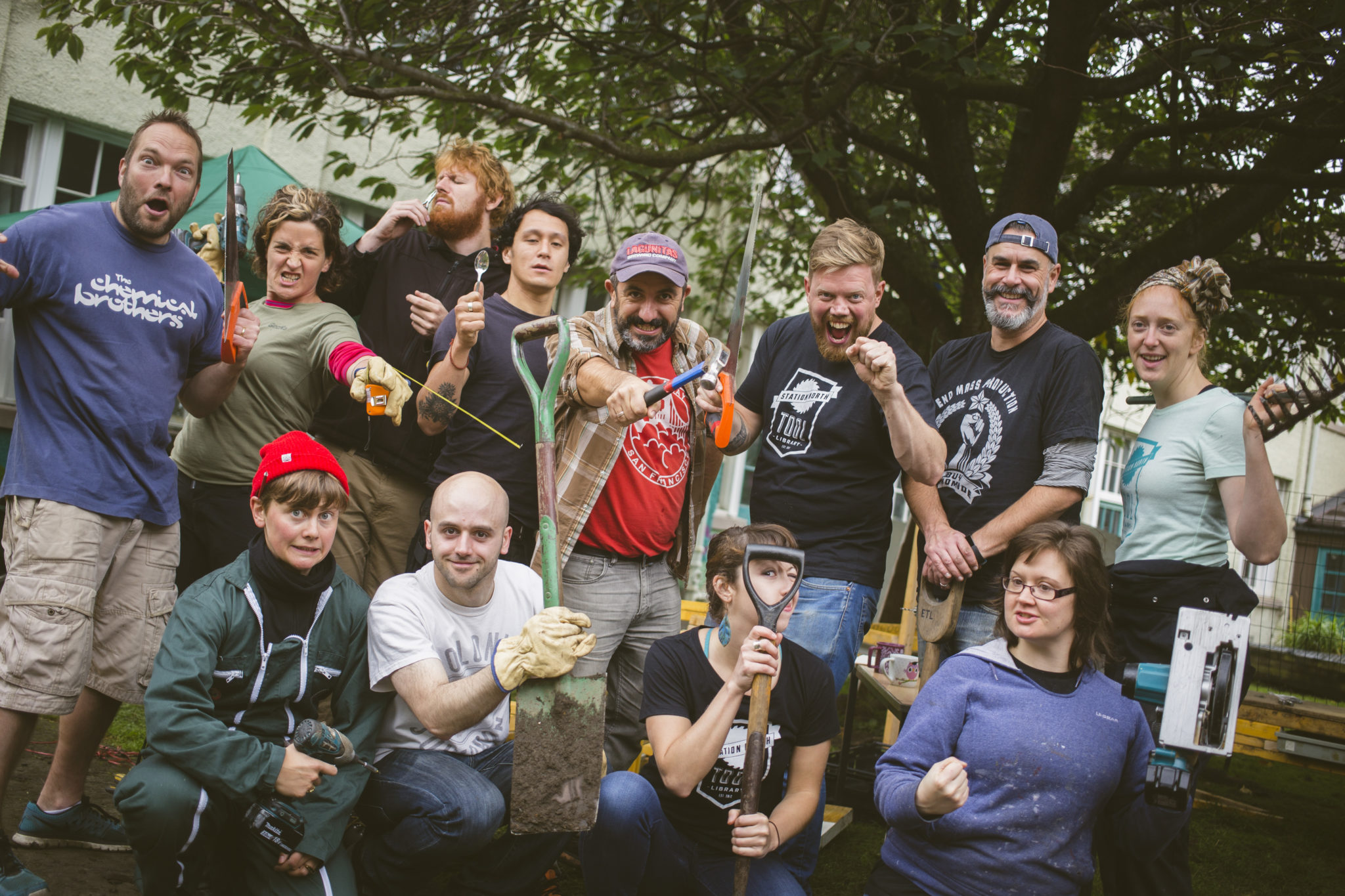 How Edinburgh Tool Library is helping to reduce consumption

Edinburgh Tool Library works like a normal library but with tools instead of books. Borrowing and sharing things instead of buying them is a key way we can reduce our consumption, so I spoke to Chris Hellawell, its founder and director, to find out more about it.

Eilidh Stanners, Friends of the Earth Scotland: For those of us new to tool libraries, can you explain how they work and why you decided to set one up?

Chris Hellawell: Tool libraries work exactly in the same way as book libraries, but we lend our members tools rather than books – although we do have some great woodwork and DIY books too! For a small annual fee, £10-40, members can access as many of our tools as they need for no extra cost. Some tool libraries, like ours, also have workshops, so that members can make a mess, and learn to use bigger tools that they can’t take home.  This also allows us to do outreach work making things with and for other community groups and charities, teaching skills and helping people feel good about learning new things and making changes to their homes, gardens and communities.

I decided to set one up, because there wasn’t one in the UK, and it is such a great thing for a community to have access to, that I wanted my community to benefit.  They are a way of adding wealth to a community without adding stuff, they empower people, they gently introduce the circular economy to people without being too soap-boxy, they save folks money, and they reduce the carbon footprint of a community. We have saved our members over £1.5million and reduced their footprint by over 180tonnes of carbon by sharing instead of buying since we opened in 2015. I can’t think why I wouldn’t set one up! Sharing is such a wonderful thing to do, and I think as soon as we become a certain age, we start to forget that.

ES: How do tool libraries help to fight waste and create a circular economy?

CH: Tool libraries are about maximising the usefulness of objects, in this case tools, that have already been made, and in their manufacture, have already created a carbon footprint. What we want to do is put these under-utilised items in as many hands as possible, thus removing the need to create another, with a second carbon footprint. We believe in access over excess.

Tool libraries are based almost entirely on donated tools from organisations or individuals – we are often taking tools that would otherwise be dumped.  We put them into circulation, repair them when they need it, and make them last for as long as possible.  Sharing is the most resource efficient loop of the circular economy butterfly diagram, as it removes the need to create the carbon footprint in the first place.

ES: You run workshops and classes at the tool library – is this an important part of the project for you?

CH: It’s really important – having access to tools is one thing, but it is important that people know how to use them, and have access to a safe space in which to learn.  We also promote the use of reclaimed timber too, and whenever possible will give things a second (or third, or fourth) life.  We also think that we are ourselves a tool for our community – that we are a resource to be accessed and used by the community to be used for it’s own benefit.

ES: Are there any other initiatives you’ve been inspired by?

CH: Loads! In the UK, The Restart Project is an inspirational social enterprise who are repair heroes, and also have done a lot to push the Right to Repair campaign. We have a wonderful partnership with Music Broth who are based in Glasgow.  They are a musical instrument library, and through our partnership, they are bringing instruments to our locations in Edinburgh once a month.

Further afield we are always in awe of some of our fellow tool libraries some of whom we have been fortunate enough to visit – The Station North Tool Library in Baltimore has amazing classes and a wonderful community around  their library, The Toronto Tool Library has developed lots of other pop up sites trialling the lending of other types of lending, with a kitchen library, a library of things, and a maker space, and in Reykjavik, the Musasafn RVK Tool Library is doing some really interesting trials of locker style pick up locations.

ES: What are your most popular items to borrow?

CH: Power tools are amazing tools to make a job easier, but they are also really expensive, and often quite specialised, so we tend to lend out lots of them. We have one cordless drill that has been lent out 193 times now, nearly four years in total! But the most ‘popular’ are often the tools people don’t realise we have, so they love it when they discover they can borrow a 3D printer from us for a month at a time, or a bubble machine for their kids parties… for the grown ups to play with!

CH: Absolutely. As we have grown, the quality of the tools in our inventory has improved.  This is partly because we are receiving better donations, but also because the good quality ones last longer and are built to be fixed. Sometimes we try to fix some “middle aisle” tools and discover the parts either aren’t available, or cost more than the tool. Built-in obsolescence is such a waste of money and resources, and it’s great that tool libraries can take away the biggest barrier to accessing high quality tools – the cost.

ES: What sort of jobs does a tool library create?

CH: We have such a diverse group of staff, who do so many things. There is lots of project management work and volunteer coordination, but equally we employ workshop managers who need to be skilled makers and great teachers. We have administrators and social media folks, as well as fundraisers and community outreach work. In our volunteer force (we call them Tooligans) we have people helping with library service delivery, but also workshop facilitation, accountants, graphic designers, repairers and fixers. It’s a real melting pot that we are always adding ingredients to.

ES: What advice would you give to someone looking to set up their own tool library?

CH: The big message is simple does not equal easy. We are seven years into our project and I still sometimes wonder when the world will realise we are making it up as we go along! It’s been a slog, but it’s also the most amazing, fulfilling and important thing I’ve done in my life, and it’s really starting to feel like something big is happening, in Scotland particularly. There is support out there now, so people need not make the mistakes we have.

ES: What could be done to encourage similar projects across Scotland?

CH: At COP26 there was a joint announcement from the Scottish Government and Zero Waste Scotland that they would fund the establishment of The Scottish Share and Repair Network. Circular Communities Scotland is now leading this network which started in March, and will support sharing libraries and repair cafes to establish and sustain their amazing work all across Scotland. Its target is to have 100 of these organisations across the country by the end of the three years of funding, and we look forward to helping the network in this goal.

Find out more about Edinburgh Tool Library
Take action to reduce consumption in Scotland
This site uses cookies to store information on your computer. To find out how we use them please view our Privacy Policy.Accept AllNo Thanks
Manage consent