How the Scottish Parliament can remake banking for the common good

It’s not providing current accounts to people who need them. It’s not lending nearly enough to productive businesses. Branches are closing leaving whole communities out of service, while profiteering investment arms funnel billions into projects which are polluting our air and undermining basic human rights.

The system is extremely concentrated: over 70 per cent of small business banking is controlled by just two shareholder-owned banks, RBS and Lloyds.

The 2008 banking crisis cost the UK economy up to £7.4 trillion, heralding a decade of austerity and the scrapping of treasured public services. In the eight years that have passed, government action to reform our creaking yet all-powerful banks has been utterly ineffective.

Once renowned as the home of the stoic and dependable bank, Scotland now hosts a bloated, self-serving ‘financial services industry’, designed, regulated and run solely to make money for its shareholders, sucking the life out of our economy and society.

Does it have to be this way? 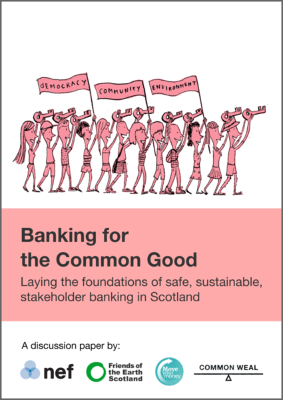 Working with Common Weal, the New Economics Foundation and Move Your Money, we have produced a proposal to show how the Scottish Parliament could build on best practice from around the world and create a powerful, democratic and socially useful banking system – starting now.

All around the world there are ‘normal’ banking systems, composed of an ecosystem of local and national institutions, democratically owned, controlled and accountable, financing home insulation, renewable energy and social housing.

The presence of national investment banks, like those in the USA, Germany and Japan, is closely associated with greater economic stability and higher economic growth. We want the Scottish Government to use its infrastructure budget to capitalise a new Scottish National Investment Bank, mandated to support jobs and sustainable development.

Such a bank would fund the creation of local banks in Scotland. We once had a network of local savings banks – today the lone Airdrie Savings Bank is all that remains.

A network of genuinely local and democratically run banks, underpinned by a national investment bank, would allow Scotland to leverage its existing infrastructure budget and enable pension funds to invest securely in socially useful projects such as renewable energy and social housing.

Last week, former governor of the Bank of England Mervyn King warned: “Without reform of the financial system, another crisis is certain … Only a fundamental rethink of how we, as a society, organise our system of money and banking will prevent a repetition of the crisis that we experienced in 2008.”

Our current financial system is extreme. We need to move away from highly concentrated, profit-driven banking to an ecosystem of institutions which are structurally designed to work for the common good.

Such reform could come from the UK Government, but prospects are dim. The Scottish Parliament has the powers required to remake banking – what is needed is vision and leadership.

A banking system that is socially useful is not fantasy, and Scotland has the powers to build it now.