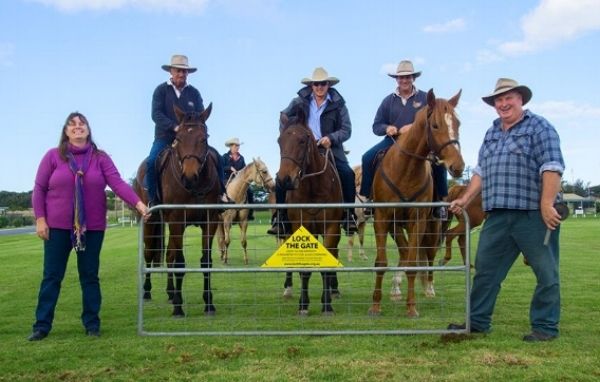 How we won Australia’s first ban on fracking

By Cam Walker, Friends of the Earth Australia

Australia has vast reserves of natural gas. Traditionally we have relied on conventional gas to meet much of our energy needs, especially from offshore reserves. But the ‘unconventional gas boom’ came to Australia, partly driven by a federal government plan to develop a major export industry so we could sell into the growing Asian market and started to encroach on huge sections of the country (more than 37% of the landmass is covered by coal and/or gas exploration or activity.

Friends of the Earth Australia (FoEA) quickly saw that this industry would be destructive. While we initially opposed the spread of unconventional gas (UCG) on climate grounds, it quickly became apparent that there were many other concerns: the invasive nature of the industry, its destructive influence on landscapes, local communities and farming activity, and potential to contaminate ground water supplies amongst them.

This threat mobilised new communities. Farming and regional communities, not the usual allies of the environment movement, started to oppose UCG. In 2010, FoEA joined with a number of farming organisations to establish Lock the Gate, which has gone on to become a major political force in the Australian landscape,

FoEA is campaigning to oppose UCG across Australia but in the southern state of Victoria we saw a crucial opportunity to stop the industry outright. Companies had been pursuing shale, tight and coal seam gas (CSG) and claimed they were on the cusp of commercialising the resource. We also know that a ban in Victoria would help the movement against fracking across Australia.

We started with a ‘CSG roadshow’, putting the issue ‘on the map’ for regional communities. Then we organised community members to oppose applications for new exploration licenses. We lost every time. We realised we needed a new tactic and we had to build the power of the movement that was emerging.

We were introduced to the work of Annie Kia, who had created the Gasfield Free organising model. This was based on determining whether the UCG industry had social license to operate, and involved knocking on the door of all households in each community. We helped establish local groups, provided training in the model, and supported door knocking efforts. As each town finished its polling (with an average of 94% support) they would declare themselves ‘gasfield free’ with a community celebration.

The township of Poowong was first, then Seaspray, where 400 people spelt out a giant ‘no gasfields’ sign on the 90 Mile Beach. Initially politicians ignored the growing community sentiment. But as we mobilised local businesses, farming groups, blitzed local media, and built political power, the situation changed. At one declaration in western Victoria, MPs and candidates were pushing to get in the declaration picture. We knew we would win.
The state government refused to budge, until an application to test drill was put forward in a small farming community in Gippsland. Angered by the failure of the conservative government to defend them, farmers threatened to blockade the drilling. A planned horse ride to state parliament to announce protest actions forced the government to ‘blink’, and in 2012, the then Coalition government (an alliance of the two key conservative parties) announced a moratorium on all onshore gas drilling. Farmers, who were used to trusting the Farmers Federation and the National Party to represent their interests, started to engage more closely with allies in the environment movement. It was this unusual alliance which gave so much power to the campaign.

By then a state election was getting close. The grassroots movement continued to grow, with a total of 75 communities declaring themselves gasfield free. We found new ways to generate media interest, like the sign made by 2,000 sheep that spelt out ‘ban gas’ and was filmed by drone. The main newspaper for rural Victoria declared the UCG campaign a major issue in the election and we were able to create a policy ‘bidding war’ between the parties. The Labor Party promised an extended ban and state inquiry should they be elected. After they came to power, the inquiry – which received more submissions than any environmental inquiry in the state’s history – led to a commitment to enact a permanent ban on all onshore unconventional gas drilling and the process of hydraulic fracturing.

In March 2017, after six years of campaigning, we watched in parliament as the legislation went through. In addition the government extended the moratorium on onshore conventional gas drilling for another four years. We were the first Australian state to permanently ban fracking!
This victory was won because urban environmentalists were able to find common cause with largely conservative farming and regional communities. Previously, the gas companies had always got their way. Standing united, we were able to win against a powerful industry, and protect our land, water, communities and climate. Sustained and strategic grassroots organising, matched with an ‘inside track’ lobby process defeated some of the largest corporations in the country.

We wish you the same victory in Scotland. I hope our story gives you encouragement and I urge you to take the opportunity presented by the public consultation and give a resounding rejection of fracking in Scotland!
TAKE ACTION NOW

Cam Walker is the campaigns co-ordinator with Friends of the Earth Melbourne. He has been active in the campaign against UCG since 2011.

For a longer summary of the campaign in Victoria please check here.