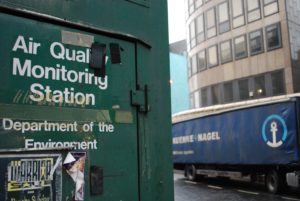 We can’t see it, but air pollution continues to plague Scotland’s busiest places. Two tiers of legal protections – both Scottish standards and European law – are being broken years after a deadline. There are 38 designated Pollution Zones across 14 Council areas where levels of toxic air are deemed unsafe.

As a result of the Scottish Government’s failure to act on this health crisis, we are forced to breathe in toxic gases and particles that have been linked with cancer, heart attacks, strokes, dementia, and poor lung development in kids. This invisible killer is responsible for over 2500 early deaths in Scotland each year.

The unfairness of air pollution is that it’s those who are least responsible for causing the problem who are worst affected: children, the elderly, and people living in poverty.

So it’s fantastic news that both Glasgow City Council and Edinburgh City Council want to host Scotland’s first Low Emission Zone. A LEZ, if done correctly, could be a life saving intervention. The Scottish Government has pledged to deliver a first Low Emission Zone by 2018, and Councillors elected on promises to clean up the air in our cities have hit the ground running.

If Glasgow and Edinburgh end up having to fight it out to secure the first LEZ, Glasgow looks likely to win: it has the bigger population and has been embroiled in a long-running legal battle so is the Government’s biggest pollution embarrassment.

But, Glasgow and Edinburgh shouldn’t have to fight for a LEZ. Clean air is a basic right, not a luxury. The Scottish Government is legally obliged to secure clean air as soon as possible in all areas still breaking EU law. This covers Glasgow, Edinburgh, Aberdeen, Dundee and Perth. So the Scottish Government’s offer to support just one LEZ falls short. It must fund Low Emission Zones in every major city, and set out plans for these as quickly as possible.

A Low Emission Zone is an area where the most polluting vehicles are restricted from the most polluted places. A LEZ should be rolled out gradually, applying first to lorries, vans, and buses, and eventually to taxis and cars. There are over 200 LEZs across Europe which have been working to improve air quality for years. In the UK’s best known scheme in London, cameras link number plates back to a database and issue fines to highly polluting buses and lorries caught in the zone.

Ideally, Low Emission Zones should enable the bus sector to thrive. Buses are a crucial solution to air pollution – 1 full double decker bus can take around 75 cars off the road. Buses therefore need to be at the heart of a LEZ strategy. In Edinburgh, this should be relatively straightforward; Lothian Buses is publicly owned and already boasts Scotland’s cleanest fleet, and increasing passenger numbers. In Glasgow and other cities, buses need proper support so that they do not increase fares or even cut routes in order to comply with LEZs. In the short term, this means that companies need access to funding to upgrade their buses. In the longer term, councils need to be given more powers to regulate bus operators, like those that Edinburgh Council has over Lothian Buses, and that the Mayor of London has over Transport for London.

A Low Emission Zone must also be ambitious and effective in reducing air pollution. In Glasgow, for example, if the Council creates a small LEZ that covers just a few streets, that will surely just result in pollution being pushed to neighbouring streets. A wider LEZ will result in the genuine shift we need to see to transform transport and make it fairer for all.

In Glasgow, the natural Low Emission Zone boundary would encompass the City Centre Pollution Zone, bound by the M8, River Clyde, and High Street. This one of three areas in the city where the Council has declared that pollution levels are regularly broken.

In Edinburgh, the City Centre Pollution Zone could be used to draw up an LEZ boundary: this comprises the quadrant from Princes Street to Queen Street, Charlotte Square to St Andrews Square, as well as some key arterial roads.

For years, Councils have known about where the most polluted places are and what the worst offenders are. The Scottish Government must listen to local expertise and help bring LEZs to fruition as soon as possible. The result will be cities which are healthier, cleaner, and fairer for all – and crucially, lives saved.

A version of this article appeared in The Herald on Wednesday 31st May.