Yesterday at the UN Climate Conference in Marrakech a broad coalition of development, union, faith and environment groups laid out their analysis of where the world is heading and the urgent action that is needed to meet the targets agreed at last year’s conference in Paris. 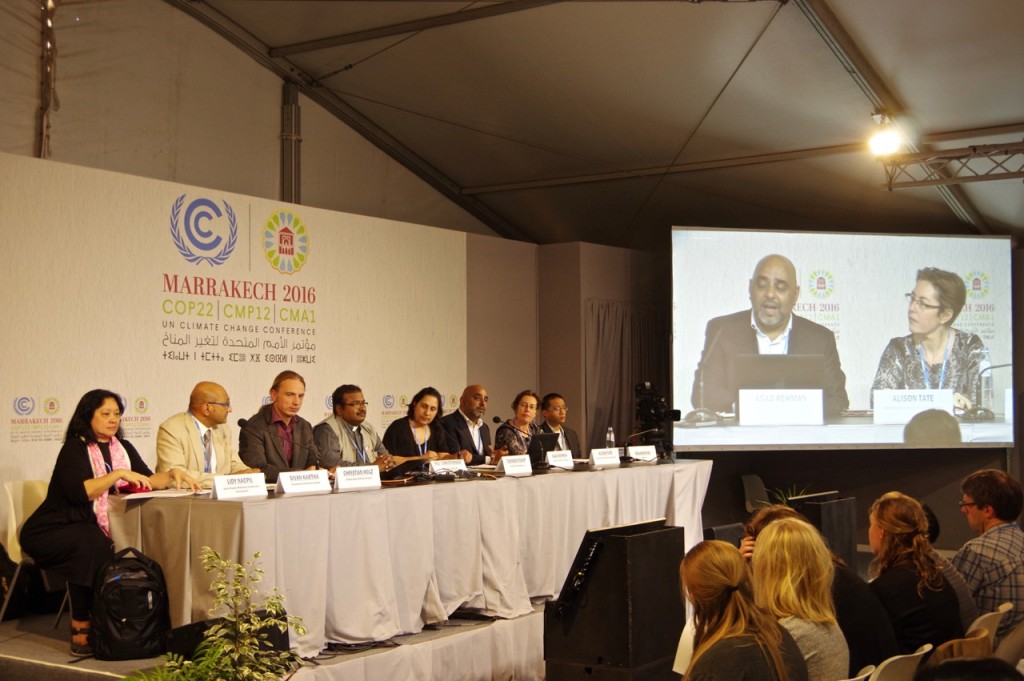 The group includes ActionAid, Christian Aid, Friends of the Earth and the International Trade Union Confederation. Their analysis shows that no country is on track to do their fair share of cutting emissions, and the developed countries are those furthest from making an appropriate contribution. Their sobering message is that the world needs to try three times harder, and quickly, if we are to have any chance of stopping climate change before it exceeds the 1.5ºC safety threshold agreed at Paris.

The report calls for a strong increase in emissions reduction efforts from richer countries, without reliance on technical fixes like Carbon Capture and Storage or bonkers ideas like mirrors in space to reflect more sunlight. That means an end to seeking new fossil fuels, including through fracking, and a managed transition to shut down the existing fossil fuel industries. At a meeting earlier in the day we heard great examples of industrial transitions working with employees and based on justice principles in Australia and South Africa.

In the context of Donald Trump’s election victory doing more is suddenly even harder but, of course, no less urgent. The US has twice before been in the position of being the big blocker in climate talks, and both times the rest of the world managed to make progress despite them.

And there are plenty of good examples. The African Renewable Energy Initiative has a series of meetings here, having been launched at last year’s Paris climate conference, and aims to double the rate of development of renewable energy by 2020 and double the total electricity generated in Africa by 2030, in the process bringing power for the first time to more than 600 million people. Another solar power initiative was launched by the UN climate secretary yesterday. Today Formula-e electric cars will race around the streets of Marrakech. And of course Scotland is already getting more than half of its power from renewables. An energy revolution is taking place.

Our own Climate Secretary, Roseanna Cunningham, will be promoting Scotland’s good examples, when she arrives this weekend to begin several days of meetings. This week in the Scottish Parliament she repeated the Scottish Government’s pledge to set even more ambitious climate targets in a new climate bill. Among other things, she will be attending meetings with representatives of cities, states and regions who are taking action on climate change. This growing band, including many from the United States, give you hope that the damage President-Elect Trump will be able to do will be rather limited and the rest of the world will get on with the transition to a low-carbon world. If we are one of those taking it seriously we will not just make a fair contribution to tackling climate change, we will boost our economy and create jobs to replace those which are already going from the oil industry.

This blog appeared in the National on 12th November 2016.