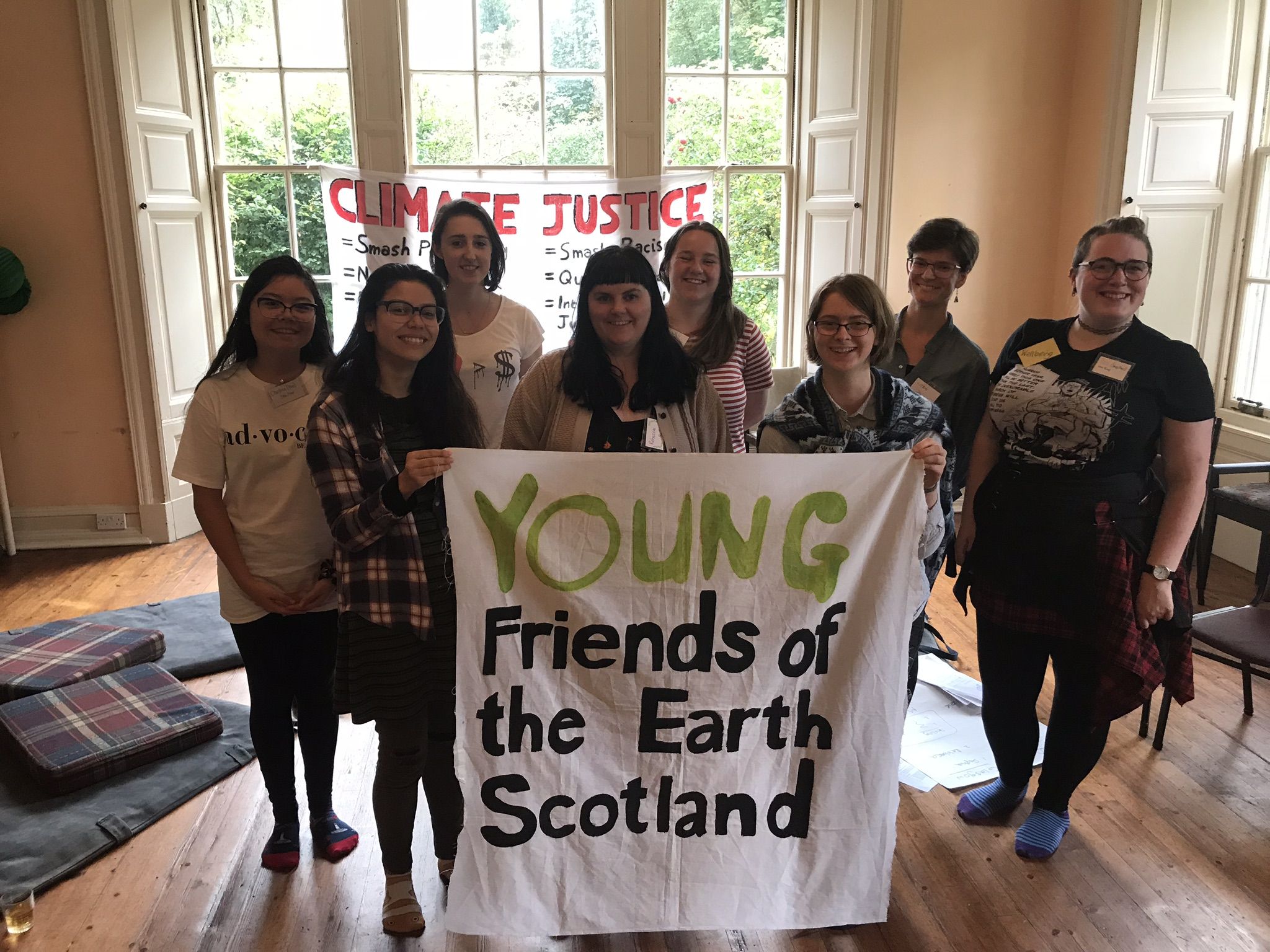 At our AGM in October, the Young Friends of the Earth network elected a brand new steering group. This group will be responsible for representing the network and responding to your needs, supporting the development and growth of the network, and ensuring our long-term vision and values.

This involves anything from making strategic decisions, to organising socials! Some of them are specific regional representatives, and some of them are general members.

Lucy McPartland
Edinburgh Regional Rep
Lucy (they/them) likes reading sci-fi (especially when they should be working), watching endless Star Trek repeats and working with intersectional groups to achieve climate justice (and, ignoring the tautology, to dismantle the capitalist patriarchy). They’re excited to work with all the amazing young activists in YFoES and the wider YFoE Europe network this year as part of the steering group. They were inspired to start working on climate action by some brilliant friends and would love the opportunity to spark other people’s interest in a similar way.

Red Wilkinson
Edinburgh Substitute Rep
Red (she/her) is a passionate campaigner for human rights and climate justice. She has a Masters in illustration and design, which comes in handy for her day job running communications for Global Justice Now. For her, climate activism is about addressing the systematic inequalities affecting marginalised people around the world. She is a Quaker, a queer feminist, and a total dork, and she lives in Edinburgh with her pet snake Simon, who is the light of her life.

Sophia Davis
Glasgow Regional Rep
Sophia (she/her) joined YFoES in 2018 and loves being in the network due to the safe and accepting atmosphere, emphasis on skill-sharing, and opportunities to meet amazing people who are working on impactful projects and campaigns. She has learned so much from the activists in the YFoES network and hopes to help organise lots of local events for new and current members!

Sophia is excited to learn more about and create projects centred around topics such as climate justice, creative activism, wildlife conservation and citizen science, and sustainable technologies. She is studying Biomedical Engineering at the University of Glasgow and believes that ethical and open biomedical research will play a role in building a more sustainable, equitable world. Sophia grew up in Hawai’i and loves swimming, hiking, camping, and going on adventures with her sister Christine.

Rebecca Crawford
Glasgow Substitute Rep
Rebecca (she/her) is very excited to be joining YFoES! In the past she has been involved in campaigns on climate justice, divestment and sustainability. Her day job is in nature conservation, specifically community engagement, working to connect people with nature and finding new and creative ways to do that. She has worked and volunteered for various conservation organisations across Scotland over the last few years as well as being involved with animal welfare campaigning in Scotland. She is also a freelance artist so is really excited to explore creative activism in campaigning!

Cara Wilson
General Member
Cara (she/her) is a recent Geography graduate. She’s relatively new to campaigning on issues of environmental and social justice, however she is really excited and looking forward to getting involved in as much as possible! She has recently been educated on the campaign urging public institutions and local authorities to divest from fossil fuel companies – something she would really like to get involved in.

Cara is passionate about protecting the environment as well as protecting human rights. The climate movement should be about the inclusion of as many voices as possible in order to ensure a fair and just future for humanity. She believes we should be fighting for the rights of everyone, not just ourselves, and that this is especially important in terms of specific groups which have been historically marginalised and persecuted.

Kirsty Gaughan
General Member
Kirsty (she/her) is a new member of Young Friends of the Earth Scotland. She lives in Glasgow, is studying learning disability nursing, and has a background in support work and childcare. Kirsty is interested in trade unions, how they connect to climate justice and how climate and social justice are interlinked. She enjoys playing football, speaking to pals in Gàighlig and going to gigs. She is looking forward to working with other members of the steering group and building community.

Christine Davis
General Member
Christine (she/her) is passionate about many issues including global health for people and Earth. Growing up on a small island in Hawai’i influenced the value of sustainability in her life and community. While on Maui, she worked on reef-safe sunscreen initiatives and plastic pollution education. She loves having debates and talking about anything interesting. Christine studies in Edinburgh but you can find her in Glasgow following her sister around.

You can get in touch with the steering group at any time via email.

We’re looking to co-opt some more steering group members to represent areas outside of the Edinburgh/Glasgow central belt such as Dumfries, Dundee, Stirling, Perth, Aberdeen. If you’re interested please drop us an email at crandall@foe.scot to find out more.