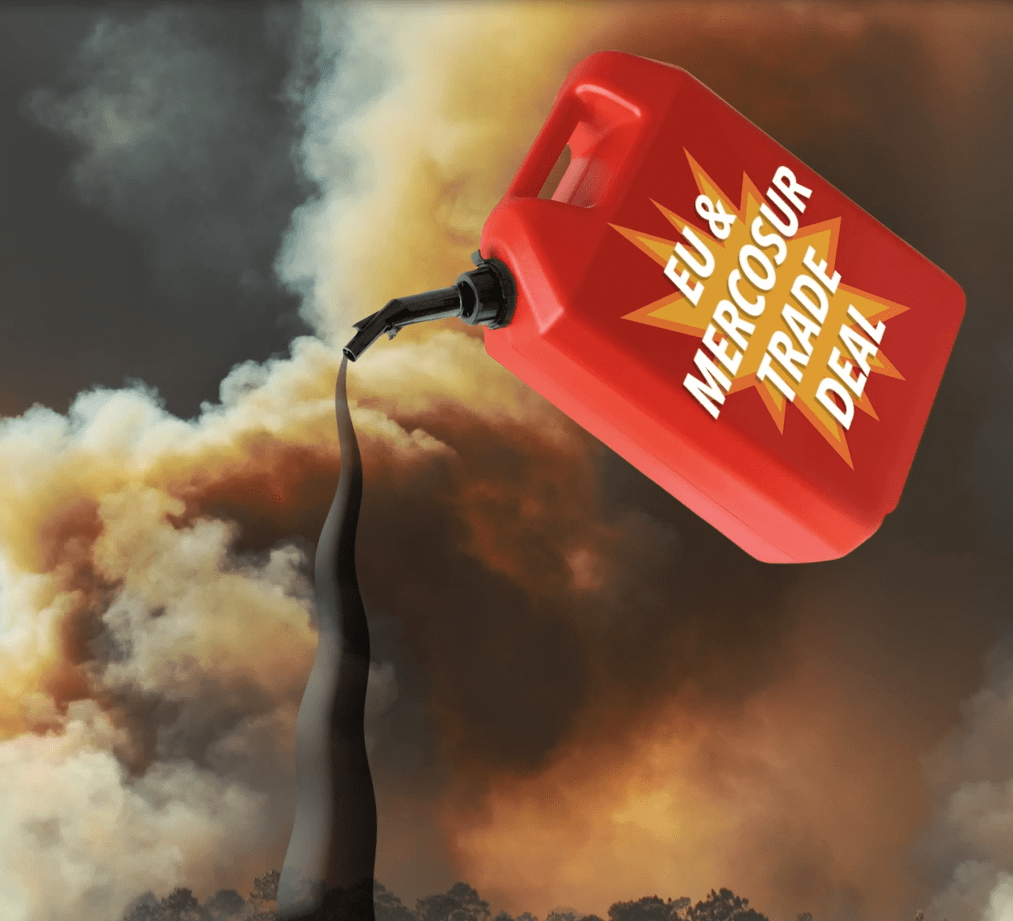 Trade deals with the EU are very topical just now but it is not a possible Brexit trade deal but a deal between the EU and four South American countries which concerns our international colleagues most.

The EU-MercoSur trade deal would see preferential trade between the EU and Argentina, Brazil, Paraguay and Uruguay. It is expected to see exports to Europe of beef, dairy products, soy beans and ethanol all grow considerably, in return for low-tariff or tariff-free sales of European goods and services, already worth €41bn and €21bn respectively. There is expected to be a 50% increase in beef exports to Europe, as well as seven times more cheese, 12 times more milk powder and five times more ethanol. In exchange, the EU expects to sell more cars, machinery, chemicals and drugs to the four MercoSur countries.

Friends of the Earth Europe short video about the threats from the EU-Mercosur deal.

A major problem with this deal is that it will add to the already overwhelming pressure to trash more of the Amazon rainforest for agriculture. Of course the EU claim that the trade agreement, 20 years in the making and signed off in principle this summer, will help protect the environment, labour standards and address climate change. The evidence on the ground is rather different.

The Amazon rainforest is home to an amazing diversity of wildlife, more than 300 tribes of indigenous people and absorbs around 5% of the carbon emissions we humans put into the atmosphere every year. This makes the health of the forest vitally important locally, regionally and globally.

The forest and its peoples faced vast numbers of fires in 2019, only to be beaten by this year, with satellites detecting over 32,000 fires burning in September. Many of these fires were set by people working for ranchers and loggers, the people who helped get far-right President Bolsonaro elected.

The people of the forest are now also suffering from the COVID-19 pandemic. Brazil is one of the countries worst affected by coronavirus, with the President initially calling it ‘a little flu.’ A secret video recording of Brazil’s Environment Minister caught him saying the pandemic gave the government the chance to ‘run the cattle herd’ through the Amazon. In August, with 27,000 coronavirus cases affecting around half of the Amazon’s tribes, the Supreme Federal Court ordering the President to do more to help indigenous people.

Built into trade agreements like this one are rules to protect multi-nationals’ investments and Friends of the Earth has been working to try to make these companies more accountable, principally through a UN process charged with creating a binding treaty on human rights and transnational corporations. The sixth round of negotiations will take place next week.

The Amazon is vitally important in so many ways but the threat to it and its people from Brazil’s far-right government and the COVID-19 pandemic has increased markedly with the new trade deal with the EU.

Dr Richard Dixon is Director of Friends of the Earth Scotland. A version of this article appeared in The Scotsman on Tuesday 20 October 2020.