More ludicrous than lycra: stuck in the 80s

Home > More ludicrous than lycra: stuck in the 80s
8th December 2011 By
I never thought that trying to save the world would involve donning blue eye-shadow, woolly leg warmers, and blindingly bright 1980s gear! Thanks to Friends of the Earth Scotland’s recent ‘video-shoot’ stunt, it did.
Saturday
canadian viagra

morning saw a bunch of FOES volunteers and a couple of staff strutting our stuff in the cold outside Parliament performing a spoof of the Calvin Harris hit, ‘It was Acceptable in the 80s’, complete with subverted lyrics and a full dance routine. You can check the performance out on Youtube. 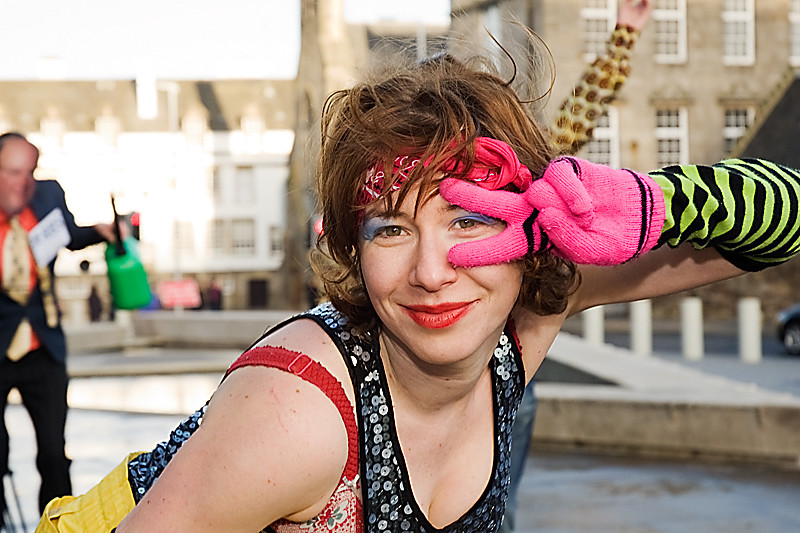 Four of the crew dressed up as Scotland’s biggest ‘climate criminals’ and danced and pranced and boasted about how they were ‘stuck in the 80s’ in their approaches to development, when the reality of climate change had yet to sink in. The rest of us dressed up in 1980s gear and reproached the climate criminals for their out-of-date attitudes.
The retro climate criminals we picked on were:
1. Muir Millar, Ayrshire Power, which plans to build a new dirty coal-fired power station in Hunterston, North Ayrshire;
2. Keith Brown, Transport Minister, who, in the government’s new draft budget, wants to pour millions of pounds of public money into motorways instead of improving public transport services and active travel provision;
3. Stephen Hester, Chief Executive of RBS, the bank which provides the biggest loans in the UK to companies investing in the Canadian Tar Sands;
4. And, the criminal whose crimes tear on my heartstrings the most: Calum Wilson, CEO of Forth Energy, which plans to burn 5.3m tonnes of wood in Scottish biomass power stations. 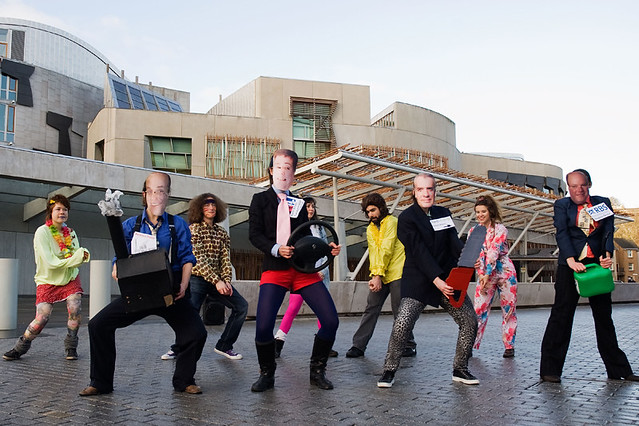 I loved taking part in this action. It showed how it’s possible to draw attention to pressing environmental issues without having to necessarily get arrested or cause trouble, but through having fun and keeping positive.
Of course, behind the fun is very serious message,
viagra uk

which we hope gets conveyed through our cheesy dance moves and hair spray. If the public has managed to leave perms and bad fashion behind, then it’s time for political leaders to leave outdated attitudes towards development behind too. When it is common knowledge that we must step away from fossil fuels, curb our transport emissions, and protect the world’s forests, it seems more ludicrous than lycra that proposals to continue burning coal, felling trees, drilling for oil, and building a lot of roads are even on the table.

We hope that the public and our leaders take heed. And until then, we’ll carry on strutting our stuff.
Oh, and of course we don’t really think these things were ‘acceptable in the 80s’, they’re just even less acceptable now!
Emilia Hanna – Biomass volunteer

What you can do

Write to the transport minister asking him to prioritise low carbon transport, not roads.
Do you want to take part in active, vibrant campaigning? Join YFoES, our network for young adults.
This site uses cookies to store information on your computer. To find out how we use them please view our Privacy Policy.Accept AllNo Thanks
Manage consent