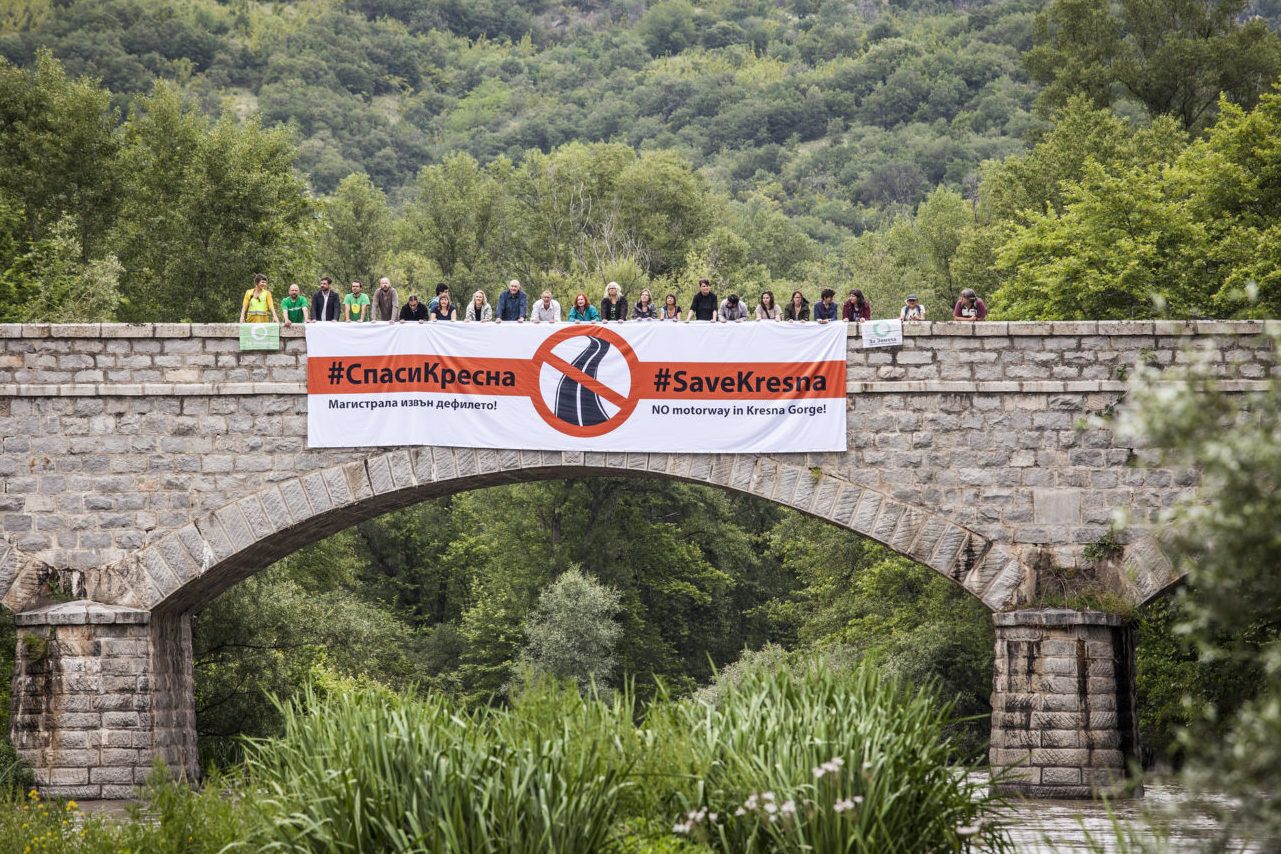 As well as discussing bylaws and agreeing budgets we visited Kresna Gorge, a lovely 16km river canyon which is Bulgaria’s top hotspot for nature and is a gateway to the Pirin National Park, a UNESCO World Heritage site. The Gorge is host to 92 protected species, including bears, wolves and two sorts of tortoise, and provides a safe corridor for wildlife to travel through this part of Bulgaria, including migrating Egyptian vultures. It is said that more butterflies live in one square kilometre of the Kresna Gorge than in the whole of the UK.

The main road to Greece goes through the Gorge. Traffic on the road has tripled in the last 15 years. The Bulgarian government had agreed to build a new motorway in a tunnel, to avoid trashing the Gorge, but the plan has changed to building a full on motorway. This has received half a billion Euros of European funding despite the Gorge and its species supposedly being protected by European nature laws.

The motorway would massively increase traffic flow, change the character of the Gorge completely where section of the walls were removed to allow for a straighter road, destroy most of the best agricultural land and risk serious water pollution from road runoff in all seasons and salting operations in the winter.

We visited the Kresna Gorge to hang a giant campaign banner from one of the bridges over the Struma River. The story featured on three Bulgarian tv stations, including a live interview from the protest.


There are 140,000 signatures on a petition to save Kresna Gorge and we went to Kresna village to hear from a range of local campaigners. One man told us of his distress over the years as the traffic built up and more and more wild animals were killed on the road. Now, he says, there is very little roadkill because populations have been reduced so severely. We also heard from a representative of the rafting industry, which brings tens of thousands people to the area every year. They are all clear that they want the existing road to remain for local access and the previously-promised motorway in a tunnel to take the long distance traffic.

The local campaigners made accusations of corruption, with sections of the road starting construction even before the tendering process was completed. Repeated appeals to the European Commission to intervene to protect nature have been met with silence.

With tremendously fortuitous timing, as we were standing in the village square meeting the locals, we got the very welcome news that the Welsh Government had turned down the M4 relief road, which has been debated for at least 25 years and would have severely damaged the sensitive Gwent Levels coastal wetlands. As you can imagine, there was a heart-felt cheer in Kresna at this news.

Wales declared a Climate Emergency shortly after Scotland did in April and this was the first big test of whether they are serious. They have passed that test and in doing so given renewed hope to people 1,800 miles away, at the opposite end of Europe.

Dr Richard Dixon is Director of Friends of the Earth Scotland. A version of this article appeared in The Scotsman on Tuesday 11th June.

Read a briefing on why Kresna Gorge must be saved.