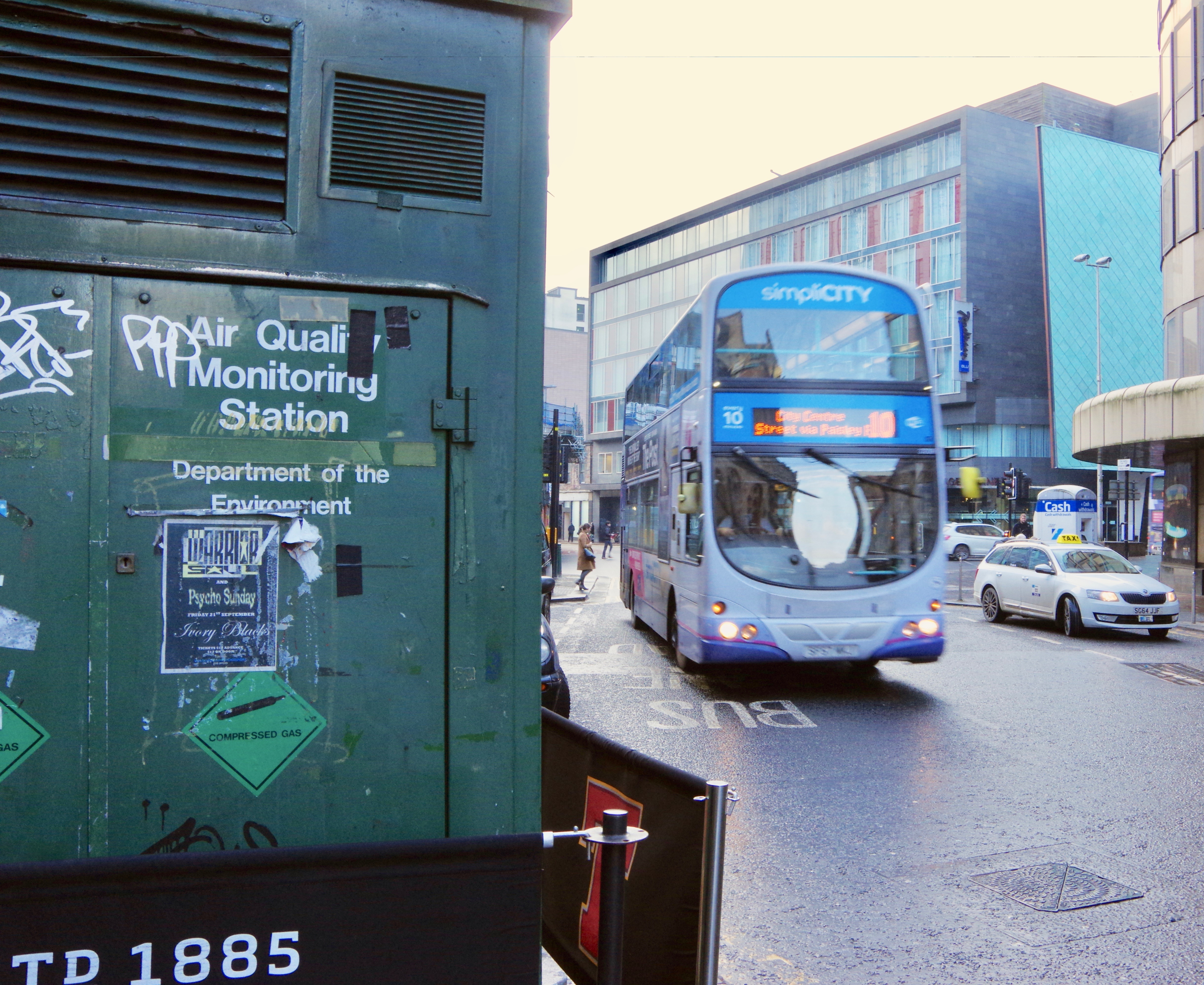 This afternoon Glasgow City Council’s Environment, Sustainability and Carbon Reduction Committee will discuss proposals for the Glasgow Low Emission Zone. This will be the first in Scotland with Edinburgh, Dundee and Aberdeen due by 2020, but there are 200 in Europe and London’s has run successfully for years.

A Low Emission Zone is supposed to stop the most polluting vehicles going into the most polluted places. Glasgow is the obvious place to start since air pollution is killing off more than 300 people a year in the city. So we were delighted when the Scottish Government committed to the idea of LEZs in 2015, vowed in 2016 to create the first by 2018 and announced last year that this would be in Glasgow.

But the draft proposals published at the end of last week are so unambitious that it is not clear they will make any difference at all in the early years. When the zone start to operate on the 1st January 2019 there will be no signs to tell you it exists. There will be no new cameras to catch vehicles that shouldn’t be there. And most importantly almost every vehicle that currently drives around the city centre will still be doing so, with only the lightest of requirements for bus operators to upgrade a few buses.

How did we come to this? The SNP nationally and at the Glasgow level made manifesto promises to create this LEZ to help solve the city’s air pollution crisis. Last week we met both the Transport Minister Humza Yousaf and Councillor Anna Richardson, who is in charge of delivering the LEZ. We remain convinced they both want to do the right thing.

It is the Government’s agency Transport Scotland and even air quality officials that have spent several years trying to make sure that almost nothing happens. Early attempts to make a mockery of the idea of an LEZ were to suggest that it should just cover one street, that it should be in Crieff and that is should be enforced by parking wardens when they had a spare moment.

We have already lost the battle to have vans and lorries included from the start, so if we are only going to do buses, let’s at least do them right. Sadly the draft proposals require only a small increase in the proportion of the cleanest buses in the city’s streets, from around 15% in 2017 to 20% in 2019, with that percentage increasing to 100% by 2022. This slow pace guarantees that the Scottish Government will fail to meet its own target of clean air by 2020 and will prolong the death toll on Glasgow.

Right now in London buses with poor emissions spend a few hours in a workshop and come out with a brand new exhaust system that meets the latest standards. The cost? Just £15,000. You have to wonder how much the life of a Glaswegian is worth?

Money for the bus?

The deep irony is that the Scottish Government has already committed enough money to make the LEZ work well from the start, £10.8m dedicated to LEZs and an extra £10m in loans to buy greener buses over the next year.

That means there is enough money already committed to transform or replace every bus that comes through the city centre over the course of the next year. And that’s without the bus companies feeling they might perhaps have a moral duty to contribute some of their own cash.

Councillors have the chance today to send these proposals back for an injection of much more ambition, before the Council makes a final decision on them.

***
Join us in George Square at 12.30pm on Tuesday 20th March to stage a ‘die-in’ protest to highlight health impacts of air pollution and urge greater ambition from Councillors

Facebook Event
This site uses cookies to store information on your computer. To find out how we use them please view our Privacy Policy.Accept AllNo Thanks
Manage consent