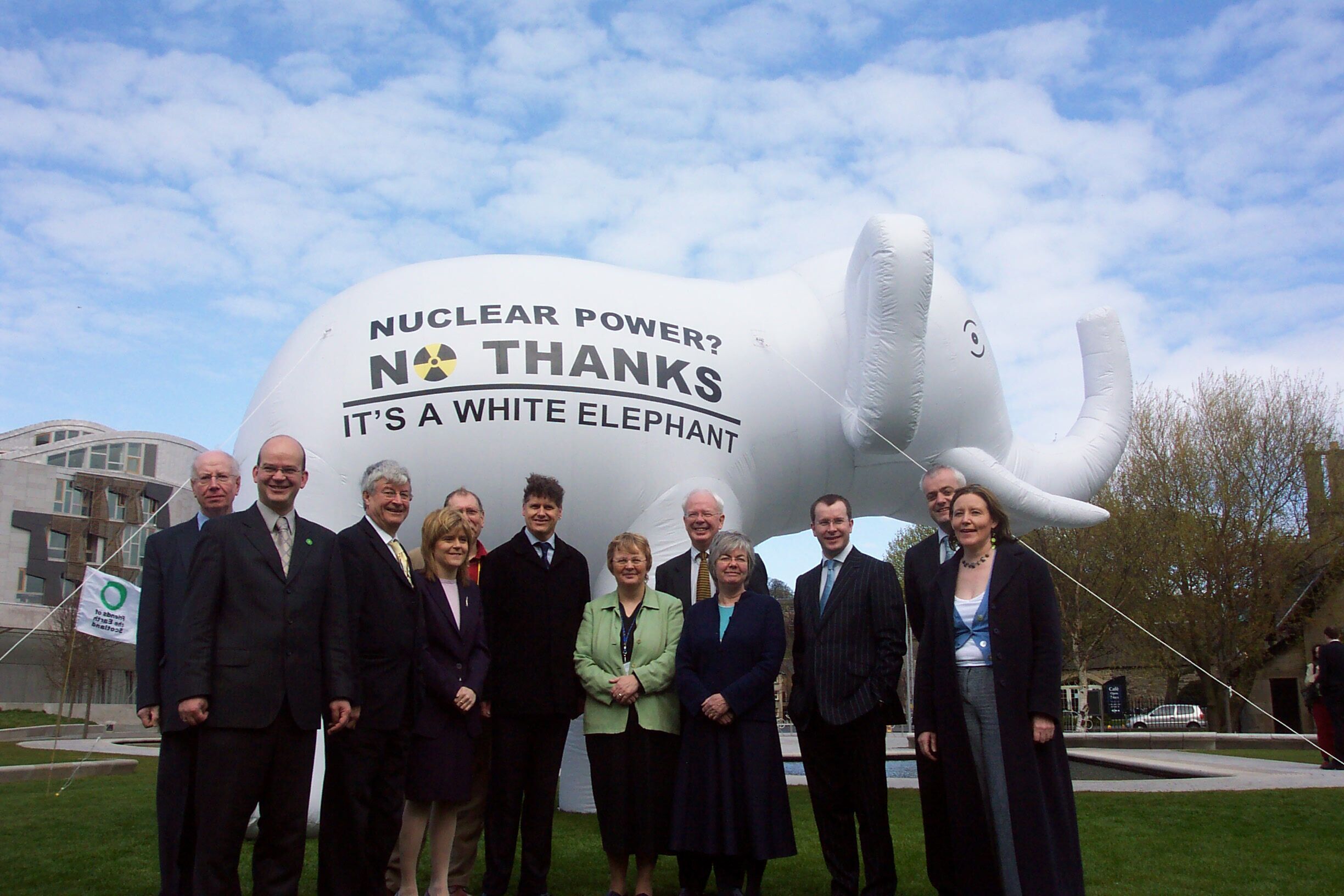 No future for nuclear power

Nuclear power is the ultimate unsustainable form of energy. For some electricity today, we are leaving a thousand generations of future humans dangerous radioactive waste.

During the late-1980s public inquiry into the Hinkley Point C nuclear station I saw a poster showing a Roman legionary standing outside a nuclear plant and carrying the message ‘If the Romans had had nuclear power we would still be guarding the waste.’ I thought it was terribly clever but it took me quite a while to realise that Roman Britain was far to close at hand. To cover the generally accepted 25,000 years, it would need to have referred to Cro-Magnon humans.

The politics of nuclear in Scotland

The politics of Scotland mean that new reactors here are almost unthinkable and the price of the renewable energy alternatives have fallen so far below the cost of nuclear that you would have to be crazy to go for new nuclear.

Labour’s Jack McConnell was the First Minister who said he would block new nuclear plants until there was a solution to the waste problem (14 years later, there is none). And it is in the SNP’s DNA to oppose nuclear power. EDF and some unions do still try to lobby Scottish Ministers and officials, but to no avail. Meanwhile the industry is doing a great job of showing how terrible a bet nuclear is.

The nuclear industry is almost unique in that every new reactor costs more than the last, while everything else gets cheaper, including offshore wind power which is now coming in at just over half the price of nuclear for a unit of energy.

The false promises of the nuclear industry

Hinkley Point C, the only nuclear station under construction in the UK, was supposed to be cooking the Christmas turkey in 2017. It is now expected to be producing electricity at the end of 2025 at the earliest. The only way it could be built was for the government to agree that electricity consumers would pay bills well over the odds for the next 35 years.

The same sort of reactor is being built in Finland. It may start producing electricity next year. 11 years late. The other one of the same design is in France and is currently running 12 years late, at twice the original budget.

The latest wheeze the industry has come up with is to ask the UK Government to agree to pay any costs over 30% above the original budget for any more reactors. Not a good bet given their history.

Of course we already have four reactors in Scotland. The two at Torness are the second newest in the UK, having been opened by Margaret Thatcher in 1989. The two at Hunterston in Ayrshire are already well past their sell-by date, having started up in 1976. They were supposed to have closed in 2006 but have had three extensions with planned closure now in 2023. Because of a large number of cracks in their cores one reactor stopped generating in March last year and the other in October. Owners EDF are arguing with regulators about whether they can safely restart.

Did you notice the lights going out across Scotland with Hunterston not producing a single electron for eight months ? No, thanks largely to renewables having a record first quarter of 2019 and supplying nine out of ten households in Scotland.

We certainly don’t need new nuclear and, with renewables rapidly on the rise, we should not take the unnecessary risk of starting up the Hunterston reactors ever again.

Dr Richard Dixon is Director of Friends of the Earth Scotland. A version of this article appeared in The Scotsman on Tuesday 2nd July.