Last week the Pope produced his much-trailed encyclical on the environment. The core of this policy pronouncement was a strong message on the moral case to act on climate change. A life-long champion of the poor, Pope Francis also criticised the weakness of political and business responses so far.

At the same time the oil industry were meeting for their annual get together in Aberdeen. They were talking about the further job cuts planned to cope with the low oil price and looking again to government for tax cuts. 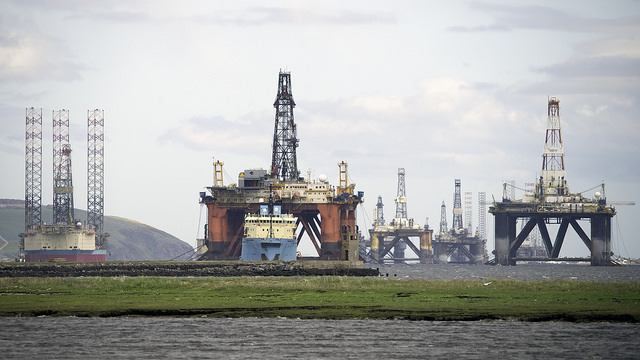 Despite the astronomical profits that the oil companies have made from the North Sea, every time there is a challenge, be it low oil prices or the scale of the bill to clean up after themselves, they expect the tax payer to help them out. And the mainstream political parties fall over themselves to look the most oil-industry friendly.

Yet Scotland has the best climate change laws in the world. These include a great set of targets -that we are so far failing to meet. Sooner or later we are going to have to square our admirable desire to do the right thing on climate change with the fact that we are a major producer and user of fossil fuels.

We produce seven times as much fossil fuel every year as we use in Scotland. We do not need the Pope to tell us that there is a moral responsibility that goes with this. We cannot ignore the carbon emissions that result from burning North Sea oil, just because it is some-one outside of Scotland who is burning it.

Globally, we know about fives times as much coal, oil and gas as we can possibly afford to burn to avoid catastrophic climate change. Most of it has got to stay where it is if we are to prevent disaster. The market is beginning to understand this for coal, the dirtiest of the fossil fuels, but not for oil and gas.

One of the reasons the oil price is low is that Middle Eastern oil producers have opened the taps wide, partly because they worry that some-one will start to take seriously the argument that we cannot burn it all – they want to get theirs sold before restrictions hit.

Last month the Saudi oil minister made the remarkable statement that fossil fuels might be past their sell-by date before the middle of this century. Saudi Arabia is using some of its oil profits to invest in solar energy so it can export green electricity when it can no longer export oil.

The recent G7 meeting in Bonn agreed to phase out fossil fuels by 2100. This got some positive press but a pledge by a bunch of leaders who will be gone long before the deadline to give up something which will mostly have run out by then anyway, is not really that impressive.

There are different ways to calculate it but earlier this year a detailed study from University College London looked at how much of which fossil fuels can be exploited before we have to give them up completely. They concluded that 80% of coal reserves need to stay in the ground, half of gas reserves cannot be burnt and a third of all the oil we know about needs to stay were it is.

All else being equal, for Scotland this would mean around another 20 years of oil operations in the North Sea, not the 30 or even 40 years that some have been talking about.

With this kind of deadline in mind, instead of lurching from one tax break crisis to the next, the Scottish and UK Governments, the unions and the oil industry need to work with other parts of the energy industry to plan a managed transition from oil and gas jobs to clean energy jobs.

There is plenty to transition into. A study by government, industry and academics concluded that going for offshore renewable energy – wind, wave and tidal – would be as big as North Sea oil has been for the economy, and create 145,000 jobs. Then there are the onshore renewables, which also require engineering skills, and the jobs to be created in the massive investment we need to make in insulating people’s homes to get them to a decent liveable standard.

We failed to have a planned transition when deep coal mining collapsed in the 1980s. We failed again in the 1990s with the closure of most of Scotland’s heavy industries. In the last couple of years, the German power companies have been caught out because solar power was suddenly much cheaper than electricity from their coal power stations.

We can see the change coming for the North Sea and we have the chance to plan an orderly transfer of skilled workers and investment from oil and gas to clean energy, and at the same time show an international lead on climate change.

We know that world leaders are not going to do enough on climate change at the UN conference in Paris in December, so some-one needs to take a lead on getting out of fossil fuels. Scotland has all the necessary qualifications – major fossil fuel production, a skilled workforce, huge potential for green energy and serious targets to meet on climate change. Next year’s annual oil conference should be planning the clear, but limited, future of North Sea oil.

This text appeared in Scotland on Sunday on 21st June 2015.