Not worth the Fracking risk

Scotland is an increasingly unattractive prospect for the shale industry, with low headline gas estimates and even smaller potential returns. This is good news for the large number of communities across Scotland faced with the threat of fracking under UK government plans to license sites in the Central Belt. 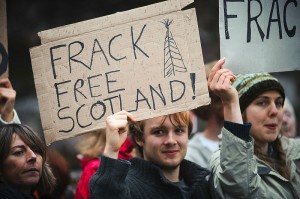 The report also indicated a potential shale oil resource of six billion barrels. Only a very small proportion would be economically extractable, so any production in Scotland would be trivial compared with the official estimate for recoverable oil in North Sea of 24 billion barrels.

The UK government is expected to announce the 14th onshore oil and gas licensing round imminently, in which 20,000 square km in Scotland could be offered for exploration and production.

Even if the survey had shown that we were sitting on hundreds of years’ worth of shale gas, climate science tells us we would have to leave it where it was to avoid catastrophic global warming.

However, Westminster’s misguided incentivising for companies to explore for shale gas and oil means we could still see operators trying their luck in Scotland in the next licensing round. This could mean hundreds of wells fracked, only to demonstrate that there is no economically viable resource.

The Scottish Government needs to ban unconventional gas extraction altogether, focusing instead on making the most of our abundant renewable resources.

A version of this article appeared in The Scotsman on June 30th 2014.