When world leaders sign the new deal to tackle climate change at the UN on Friday it will mark an important step on the road to dealing with this huge global problem. It is also a clear recognition by countries across the world, including Scotland, of the need to take urgent action.

The historic deal was agreed by 196 nations at the UN climate change summit in Paris in December. They have committed to limiting the global temperature rise to ‘well below’ 2oC and to drive efforts to keep the increase to 1.5oC above pre-industrial levels. The Paris Accord includes the promise by wealthy industrialised nations to provide $100bn per year to help vulnerable countries to adopt clean energy and cope with the impacts of climate change.
The deal comes as global temperatures continue to rise and many poor countries continue to be hit first and hardest. NASA announced that 2015 was the hottest year since we started keeping track, shattering the record set only twelve months previously. For many of the world’s poorest people such changes in climate can lead to homes, lives and jobs being destroyed by more frequent and severe storms, floods and droughts. Increasingly erratic weather can make it ever harder for subsistence farmers to produce food as once predictable rains do not come, or flash floods wash away their crops.

In recent years Scotland’s political parties have recognised the urgent need for action. The Scottish parliament unanimously passed world-leading climate change legislation. We have helped thousands of people in vulnerable communities overseas through the Climate Justice Fund. It is recognised that Scotland, as a rich industrialised nation which built its economy on burning huge amounts of fossil fuels, has a clear moral obligation to deal with the problem.

Despite this welcome commitment and commendable progress in areas such as renewable electricity, Scotland has missed its annual carbon emissions targets to date. Too few policies have been brought forward to secure emissions reductions. The next Scottish Government must embrace a low carbon future with the rewards for our health, economy, and built and natural environment that could bring.

Ahead of the elections on 5th May, we want to know what the different political parties will do to make sure action to tackle climate change is a priority. In the new era of ambition following the Paris accord, Scotland’s political parties will come together tonight for an online climate debate organised by Stop Climate Chaos Scotland. Being hosted by writer and broadcaster David Torrance, the event will be streamed live online from 7pm. Parties will be challenged to outline what they will do, if elected, to make sure Scotland plays its part in achieving climate security for the future. 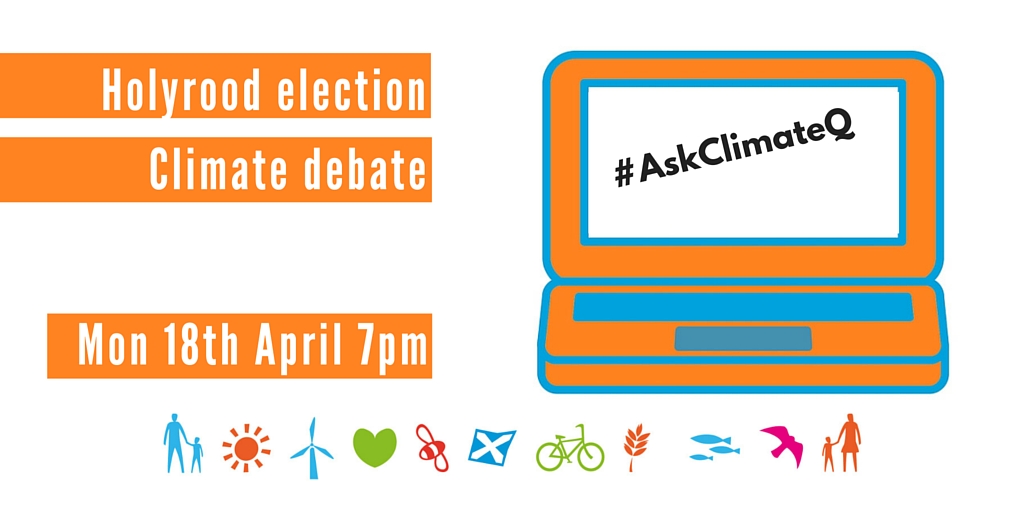 There is much to debate. What policies will the different parties put forward relating to transport, warm homes, energy, low carbon infrastructure and agriculture?

Transport accounts for a quarter of Scotland’s greenhouse gas emissions. Government spending is still overwhelmingly skewed towards the private car. We believe the next Scottish Government should introduce measures to discourage the use of the private car where low carbon alternatives exist. By increasing walking and cycling opportunities we would also secure the added health benefits of a more active population.

We need multi-billion pound investment and a clear, well-structured scheme to ensure every home in Scotland meets a decent standard of warmth and energy efficiency. Heating our buildings currently accounts for over half of Scotland’s climate emissions, but only a tiny 3% of that heating demand comes from renewable sources. Investing in low-carbon infrastructure, such as district or community heating schemes and renewable-powered heat would create jobs, help provide warm homes and could dramatically cut emissions.

The current Scottish Government wants to reduce Air Passenger Duty to encourage more people to fly despite knowing that this would increase carbon emissions from this highest emission form of transport. Instead of creating yet more advantages for the airline industry, any changes to Air Passenger Duty must decrease, not increase, emissions from the ever-expanding sector.

Agriculture accounts for almost a quarter of Scotland’s climate emissions. We are looking for commitment to an ambitious land use strategy which includes food, forestry and peatlands, We can significantly decrease emissions from agriculture, and improve biodiversity and water quality.

It will be fascinating to hear how the different parties will tackle the above issues, and turn climate ambition into climate action.

This is a guest blog by Tom Ballantine, Chair of Stop Climate Chaos Scotland (SCCS).

To watch the debate from 7pm on  Monday 18th April go to bit.ly/Climate_Debate

Read the Stop Climate Chaos Scotland Election Manifesto
*****
The Stop Climate Chaos Scotland election campaign is directed towards the five political parties currently represented in the Scottish Parliament.  SCCS is neutral, in terms of party politics, but organised this event to ensure climate is key in the election debate and to provide an opportunity for you to question the main parties.