People Power in Paris: We are making another world possible

Home > People Power in Paris: We are making another world possible
12th December 2015

After 4 days of false starts, or rather false endings – the final Paris Agreement text was eventually produced at 1:30CET, and gavelled though after a last minute fight over ‘should’ or ‘shall’ at 19:20 today. Its only saving grace – that the word equity appears a few times, and the distinction between the rich countries who have caused the climate crisis and the poor who will suffer most from its impacts, if not fully intact, is still there. 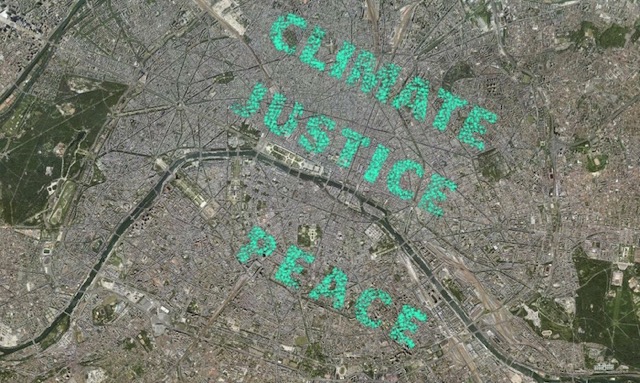 Don’t be fooled by Foreign Minister Fabius and President Hollande’s grand speeches about seizing once in a lifetime opportunities to change the world. The deal signed today in Paris does a sum total of nothing to prevent not just 2 degrees warming, but runaway, planetary emergency style climate change. The much-publicised reference to 1.5 degrees warming is just that – a reference, not an obligation to keep below a level of warming that voices from the global south say might, just might mean they have a chance to stay alive. When measured against the People’s Test on Climate, the Accord de Paris fails on every point.

But if this is where you stop reading and switch over to the iPlayer to numb the pain – don’t!

What the Paris Climate talks have done is not just about the deal signed here today. When the COP21 circus came to town so did an incredibly vibrant, energetic, solutions-focused hoard of people who are already leading the way to solve this crisis we face. All over Paris creative demonstrations of people power have been taking place despite the state of emergency. The three peaceful actions that took place across the city today are a case in point: activists had to re-think everything after the horrific terrorist attacks last month. With no time to spare, we didn’t only re-think them, we made them even more empowering and impactful.

In an inspired response to restrictions on large gatherings, this morning 3,000 people came together to spell out the words ‘Climate, Justice, Peace’ in massive letters across the streets of Paris by way of geo-localisation. You can see the fantastic result at http://climatejusticepeace.org/. At noon activists laid red flowers near the Arc de Triomphe in memory of the victims of climate change and then drew a massive red line all the way from there to the Eiffel Tower, marking the red line ours and the planets survival require we don’t cross. The day of action culminated in a giant human chain and an inspirational rally where Naomi Klein and grassroots leaders from around the globe brought people together to celebrate the breadth and diversity of our movement.

On Friday evening, when I escaped from Le Bourget during a rare lull in the negotiations, the gathering of 2,000 Friends of the Earth members and supporters from around the world that I found myself at demonstrated very clearly to me where the real energy is to tackle this crisis head on. It’s in the communities fighting and winning the fights against fracking in the UK, oil in Adriatic, and new coal plants in India. It’s with the people fighting unsustainable agro-businesses in El Salvador and for clean water in Palestine. It is with the communities building their own renewable energy from Scotland to South Africa and Germany to the Gambia.

So the message from Paris as the talks draw to a close? Keep building the climate movement, and the people power we need to create a better world for all of us. We are unstoppable – we are making another world possible!