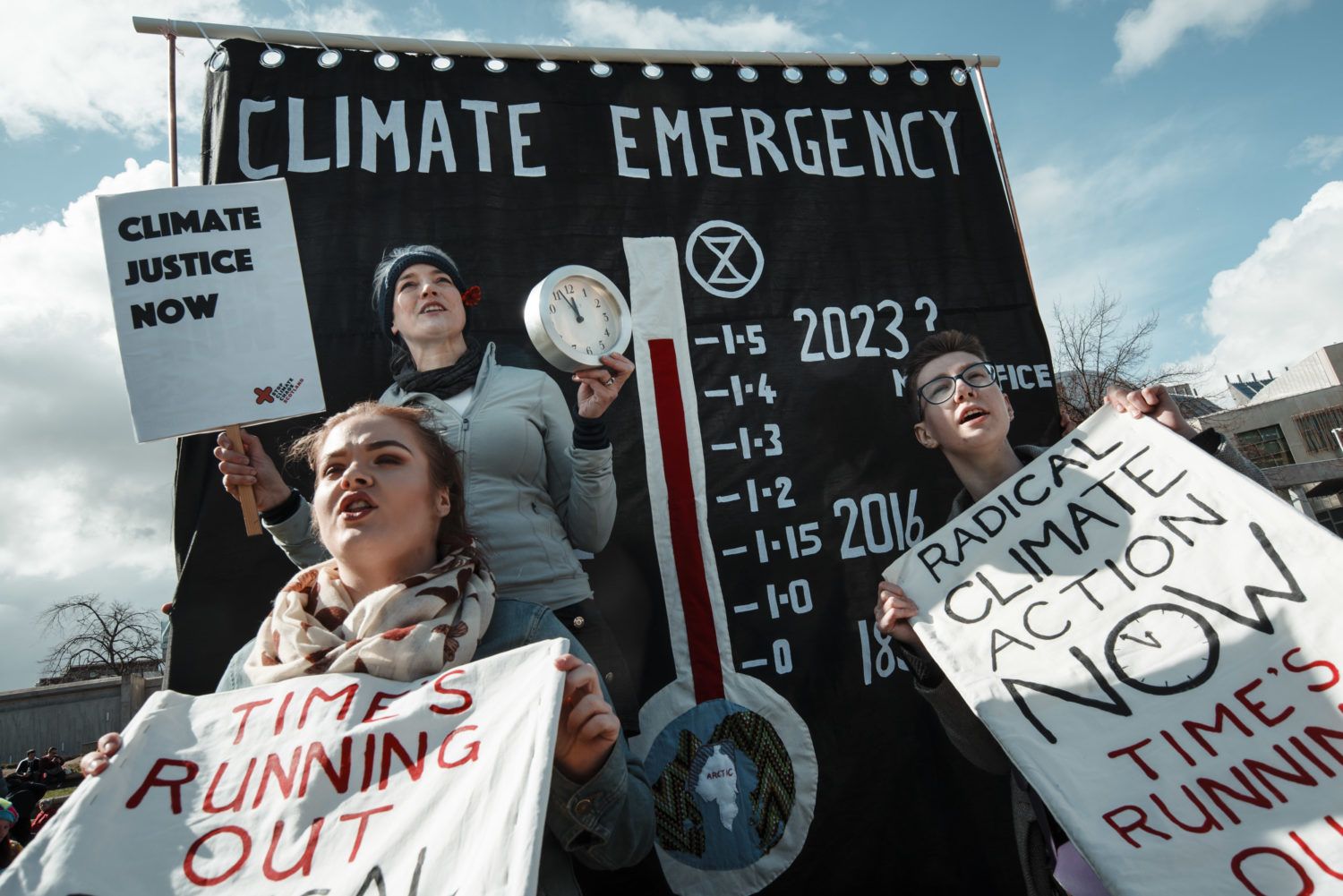 Political rhetoric on climate change is improving, but political action is lagging behind

Home > Political rhetoric on climate change is improving, but political action is lagging behind
1st July 2019 By Caroline Rance

It’s been an incredibly busy couple of months for climate news, from declarations of climate emergency to net-zero announcements. Alongside all this, MSPs in the Scottish Parliament have been debating and voting on Scotland’s new Climate Change Bill. But are the Government any further forward with taking the bold action needed on the climate crisis?

Now that Parliament has broken up for the summer holidays, let’s take a look back at what’s happened so far and where we need to keep the pressure on before the Climate Bill finally becomes law later this year.

Bowing to increased public pressure from climate activists, including the school strikers and Extinction Rebellion, First Minister Nicola Sturgeon declared a climate emergency in April, saying that “Scotland will live up to our responsibility to tackle it”.

The impacts of climate change continue to be felt around the world with heat waves across Europe and devastating water shortages in India reminding us that climate breakdown is harming people today. Talking about a ‘Climate Emergency’ cannot simply be fine rhetoric for political speeches. We need to see a full emergency response.

We welcomed the government’s decision, in light of the climate emergency, to scrap a planned tax cut for the airline industry but the First Minister’s decision to officially open Edinburgh Airport’s new terminal just a few weeks later sends an altogether different message.

The government has said that all decisions will now be reviewed through the lens of the climate emergency, but this must be consistent. The First Minister must ensure that her government is now seriously planning for the end of polluting fossil fuels and starting to build the alternatives across society – from how our energy is produced to home heating and the transport system. They cannot continue to blame individuals for failing to make the right ‘lifestyle choices’ if alternative transport, food systems, energy etc are not available.

Crucially, the Climate Change Bill going through Parliament must reflect the scale and urgency of action needed to tackle the climate crisis.

Just a few days after Nicola Sturgeon’s declaration of climate emergency, the long-awaited report from the UK Committee on Climate Change (climate advisors to the UK, Scottish and Welsh governments) suggested the UK should reach net-zero greenhouse gas emissions by 2050, with Scotland aiming for net-zero by 2045.

The recommendation for Scotland was immediately accepted by Nicola Sturgeon, while the UK government took longer before deciding to change the UK Climate Change Act to set the net-zero target of 2050 in law.

This target date is later than we’ve been calling for, while very little effort has been made to increase action and ambition over the next 5 – 10 years. It is, of course, politically much easier to set these bold sounding targets for 25 or 30 years away, when none of our current politicians are likely to be in government, than it is to make the big changes required today. That requires real political leadership, which seems to be in short supply.

Has any of this changed the Climate Change Bill?

Last month, over 150 amendments (suggested changes) to the draft law were put forward by Government and MSPs from all parties to be debated and voted on. MSPs on the Parliament’s Environment, Climate Change and Land Reform committee debated and voted on all of these over 2 sessions in June.

Campaigning as part of the Stop Climate Chaos Scotland (SCCS) coalition of civil society groups and organisations, we have consistently been calling for the new Climate Change Bill to deliver on the Paris Agreement. Our key demands have been to set stronger targets to cut climate emissions, particularly increasing action over the next decade, to ensure that public spending is consistent with our climate goals and to commit to new policy action to cut emissions from homes, farming and transport.

So, where does the Bill stand on these things now?

When the Climate Bill was published last year, it had targets of cutting emissions 90% by 2050, and 66% by 2030. These goals were too little, too late. We’ve continuously been making the case for stronger targets in the Bill, so were supportive of amendments by the Greens and Labour that would increase ambition.

The government’s new target of net-zero by 2045 was voted through and in a disgraceful failure to live up to their rhetoric on the climate emergency, SNP and Conservative MSPs voted against significantly increasing the 2030 target.

As it stands now, the Bill sets targets of reaching net-zero by 2045, with a target of reducing emissions just 70% by 2030. We will continue to work and push for stronger targets and action, particularly in the crucial next decade, until the very end of this process.

Spending for a safe climate

We want to make sure that when the Scottish Government is deciding when and how to spend its budget – our money – that it’s investing in our zero carbon future, so we were supporting amendments that would legally require the government to detail how much money it is putting into climate plans. The government has now committed to improve how the annual government budget finances climate measures, and has set up a working group to take this forward. A positive step, we’ll be watching and working to make sure it delivers!

Some MSPs had wanted to put policy action into the Bill with amendments such as improving the energy efficiency of all homes in Scotland, banning fracking or cutting emissions from farming but because the title and the purpose of the Bill is about targets, these were ruled as not being allowed. However, some cunning amendments were passed that mean government has to set out in future climate plans what they are doing to develop low-carbon heating and electric vehicle charging.

We were supporting amendments to the Climate Change Bill that would establish a long-term Just Transition Commission in law, to advise government and parliament on measures on the transition to a zero carbon economy, and to work with workers and trade unions on retraining and green new jobs.

MSPs were not allowed to vote on this, due a Parliamentary rule that draft laws cannot be amended to include things that will cost more than £400,000. If the government is serious about tackling the climate emergency and supporting a just transition, they must choose to put in the money to make it happen.

Labour MSP Claudia Beamish had put in a set of climate justice amendments – on respect and protection of human rights, equity, just transition and protecting the rights of future generations. The Cabinet Secretary has promised to work on these over the summer, so we look forward to seeing these important principles of climate justice reflected in the final law.

After the summer, the Bill will move into the final Parliamentary stage – our last chance to improve the targets before it becomes law. More amendments will be proposed, including on those issues where government said they would do more work over the summer – and MSPs across the whole Parliament will vote on the final Climate Change Bill.

The government has also said that their 2019/2020 Programme for Government – their list of priorities for the year – will have ‘climate at the heart’, and that they will publish a new climate plan (of policy action) within 6 months of the Bill becoming law. These are important opportunities to get the policy action we want to see.

We’ve already seen how public pressure has forced the government to take more ambitious action, we must keep it up. Stop Climate Chaos Scotland are urging people to sign a petition to Party Leaders urging them to increase action.

Sign the petition
This site uses cookies to store information on your computer. To find out how we use them please view our Privacy Policy.Accept AllNo Thanks
Manage consent