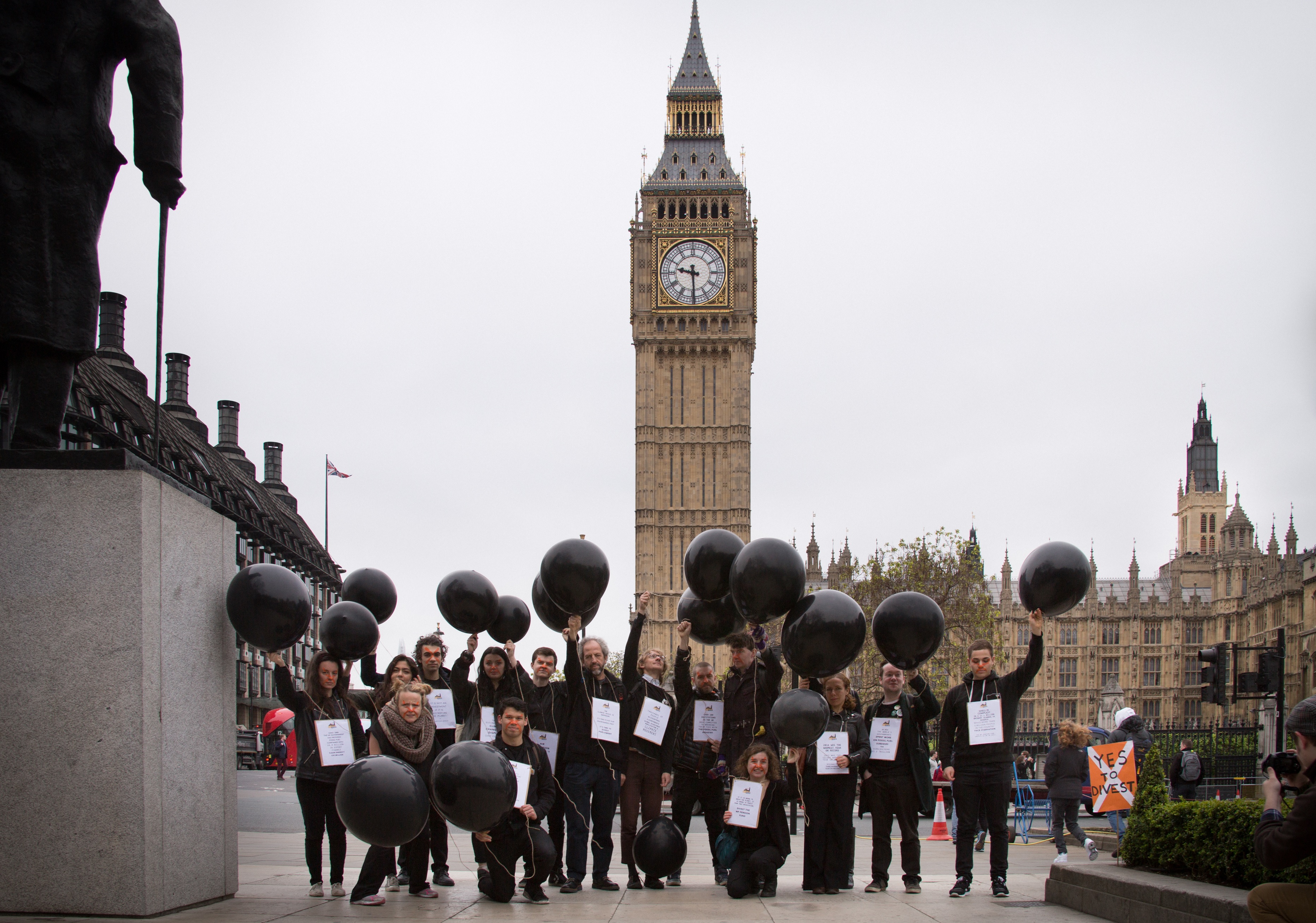 On the eve of an international summit on climate finance it has been revealed that Labour Leader Jeremy Corbyn and SNP Westminster Leader Ian Blackford have joined a long list of MPs calling for divestment from oil, coal and gas companies.

A cross-party group of over 100 MPs and former MPs are calling on the £612 million Parliamentary Contributory Pension Fund to stop investing in fossil fuels. The pledge calls for action to tackle climate change and the “phasing out fossil fuel investments over an appropriate time-scale”. (1)

Labour Leader Jeremy Corbyn and Shadow Chancellor John McDonnell become the 99th and 100th MPs to sign the pledge. They join over 100 current and former MPs from the Labour Party, the Conservative Party, the Liberal Democrats, the Green Party, the SNP, the SDLP and Plaid Cymru.

“Two years on from the historic Paris Agreement, our country must show leadership in confronting the existential threat posed by climate change. One contribution we can make as MPs is to end the investment from our pension fund in fossil fuel industries, which is why I have signed the pledge. To help protect our planet, we must wean our economy off its fossil fuel dependence and do more to move towards clean and renewable energy.”

‘’I want Scotland to continue to build a prosperous, low-carbon economy. We have already exceeded our world-leading climate change goals and our renewable energy targets too, but we must remain ambitious for the future and can always go further. It is important that our investment decisions support this ambition.”

The pledge has been organised by the Divest Parliament campaign who are calling for an end to fossil fuel investments and action on climate change (3). First signed and championed by Caroline Lucas, MP for Brighton Pavilion and Green Party Co-Leader in 2016, other signatories of the pledge include Labour MPs Rebecca Long-Bailey, Ian Murray and Harriet Harman, Conservative MP Zac Goldsmith and Liberal Democrat MP Norman Lamb. (3)

The announcement came as 50 heads of state, including UK Prime Minister Theresa May, arrive in Paris for an international summit on climate change and the mobilization of climate finance hosted by President Macron of France. It also marks the two year anniversary of the UK government joining nearly 200 nations in signing the Paris Agreement. To meet the objective of limiting global temperature rise to 1.5°C, scientists have warned the vast majority of the world’s known fossil fuel reserves must stay in the ground.

Despite this agreement, and cross-party support for the UK Climate Change Act, the Parliamentary Contributory Pension Fund continues to invest millions of pounds of MPs’ pensions in fossil fuel companies, including £5.6 million in BP and £4.9 million in Shell. The pension fund has to date been unwilling to make public a full list of its investments.

“Like the rest of my generation, I’m deeply concerned about the impacts of climate change here and around the world. It’s great to see MPs listening to their constituents and showing political leadership on climate action. Investing in companies such as BP and Shell, who continue to dig for more fossil fuels and lobby against climate policy to line executives’ pockets, is dangerous and wrong. I hope more MPs will join those committing to Divest Parliament today, and prioritise concrete action to build a clean, fair energy system for all.”

Ric Lander, Campaigner at Friends of the Earth Scotland said:

“Climate change is already affecting millions of people as rising seas and extreme weather destroy whole communities. We urgently need to cut our emissions – but this change won’t happen if our leaders continue to bet their pension on companies who will lose out if we go green. That’s why it’s so encouraging to see senior MPs calling for their pension fund to take climate change seriously by going fossil free.”

‘Unmitigated climate change threatens to undermine our economy, shared environment and global security. Under the UK’s Climate Change Act and the Paris Agreement, the UK is committed to limiting warming to well below 2C and to aim for no more than 1.5C. This requires leaving the vast majority of fossil fuel reserves unburnt, creating the real possibility of fossil fuel assets becoming stranded – with profound implications for the global economy.

We believe Members of Parliament have a responsibility to act on climate change, and a unique opportunity to show leadership on climate action, responsible investment and the management of climate risk through addressing the practices of our own pension fund.

As MPs past and present, and members of the Parliamentary Pension Fund, we call on the Trustees to uphold their fiduciary duty and take the financial risks of climate change seriously. We ask they quantify, disclose and review the fund’s investments in carbon-intensive industries, engage in a dialogue with fund members and managers on responsible investment, and commit to phasing out fossil fuel investments over an appropriate time-scale.’

2. ‘Divest Parliament’ is a campaign working with MPs from across the political spectrum to address the financial, environmental and moral risks related to their pension investments in fossil fuels.
http://divestparliament.org/

A full UK list of the over 100 signatories can be found here:

4. In Scotland the Universities of Glasgow, Abertay, West of Scotland and Queen Margaret, along with the United Reform Church, have committed to fully divest from fossil fuels. Over 100 institutions in the UK have now committed to divest, including a third of all UK Universities, The British Medical Association, The Church of England, The Guardian Media Group and several Local Government Pension Funds. Globally over 800 institutions have made commitments, to see the full list visit www.gofossilfree.org/commitments

5. Friends of the Earth Scotland is

*an independent Scottish charity with a network of thousands of supporters and active local groups across Scotland,

*and part of the largest grassroots environmental network in the world, uniting over 2 million supporters, 75 national member groups, and some 5,000 local activist groups.