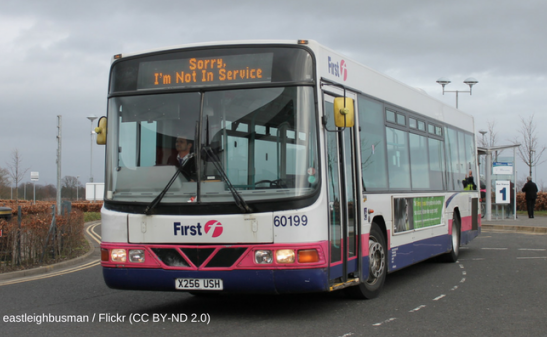 Campaigners will protest outside the Scottish Parliament today in support of public ownership of buses, as the Transport Bill is discussed inside.

The Bill is being reviewed by the Rural Economy and Connectivity Committee, and today will hear evidence from bus experts. Campaigners arguing for public ownership say that private companies are failing bus passengers, with fares rising and services being cut.

——–
EVENT DETAILS: The protest/photo action took place at the bus stop outside the front of Scottish Parliament. Photos available at https://flic.kr/s/aHsmt9vXfw

The Scottish Government’s Transport Bill does not include an option for public ownership but almost 2,000 people responded to the Bill’s public consultation to demand Councils are granted the powers necessary to run their own bus companies.

A petition of over 10,000 signatures was handed to members of the REC Committee calling for a publicly-owned bus company for Glasgow. [1]

Friends of the Earth Scotland have backed the call for the Scottish Parliament to ensure all local authorities can own and run their own bus services. Air Pollution Campaigner Emilia Hanna said:

“Passengers are here to show that there is huge demand for public ownership of buses. The Transport Bill gives Parliament a fantastic opportunity to transform the way buses are run. People are very angry at poor bus services across many areas in Scotland. Fares are going up while services are being cut and it’s not surprising that passenger numbers are falling dramatically.

“Private bus companies are failing Scotland and we need change. The Transport Bill, in its current version does not deliver the changes needed. MSPs need to add an amendment that would allow councils to compete fairly with private companies. Taxpayers spend millions subsidising buses, and while company CEO’s are lining their pockets, passengers are seeing fares going up and routes cut. People in Scotland saying give councils control and make sure passengers get a decent service.”

“By increasing bus use we can cut air pollution and congestion, reduce climate emissions, and make our towns and cities better places to spend time. The majority of people want buses in public ownership and MSPs need to heed these calls.

Ellie Harrison, campaigner with Get Glasgow Moving who are organising today’s protest said, “We need to completely shift the debate about public transport in this country. Buses are vital public services, which provide both social and environmental goods. They are not a ‘market’ and should not ‘compete’ with trains, Subway, trams or other forms of sustainable transport. We need the power and the investment in Glasgow to plan a comprehensive, integrated network so that everyone can get where they need to go easily and cheaply and with the lowest environmental impact. That’s the only way to deliver the Scottish Government’s aim of so-called ‘inclusive growth’.”