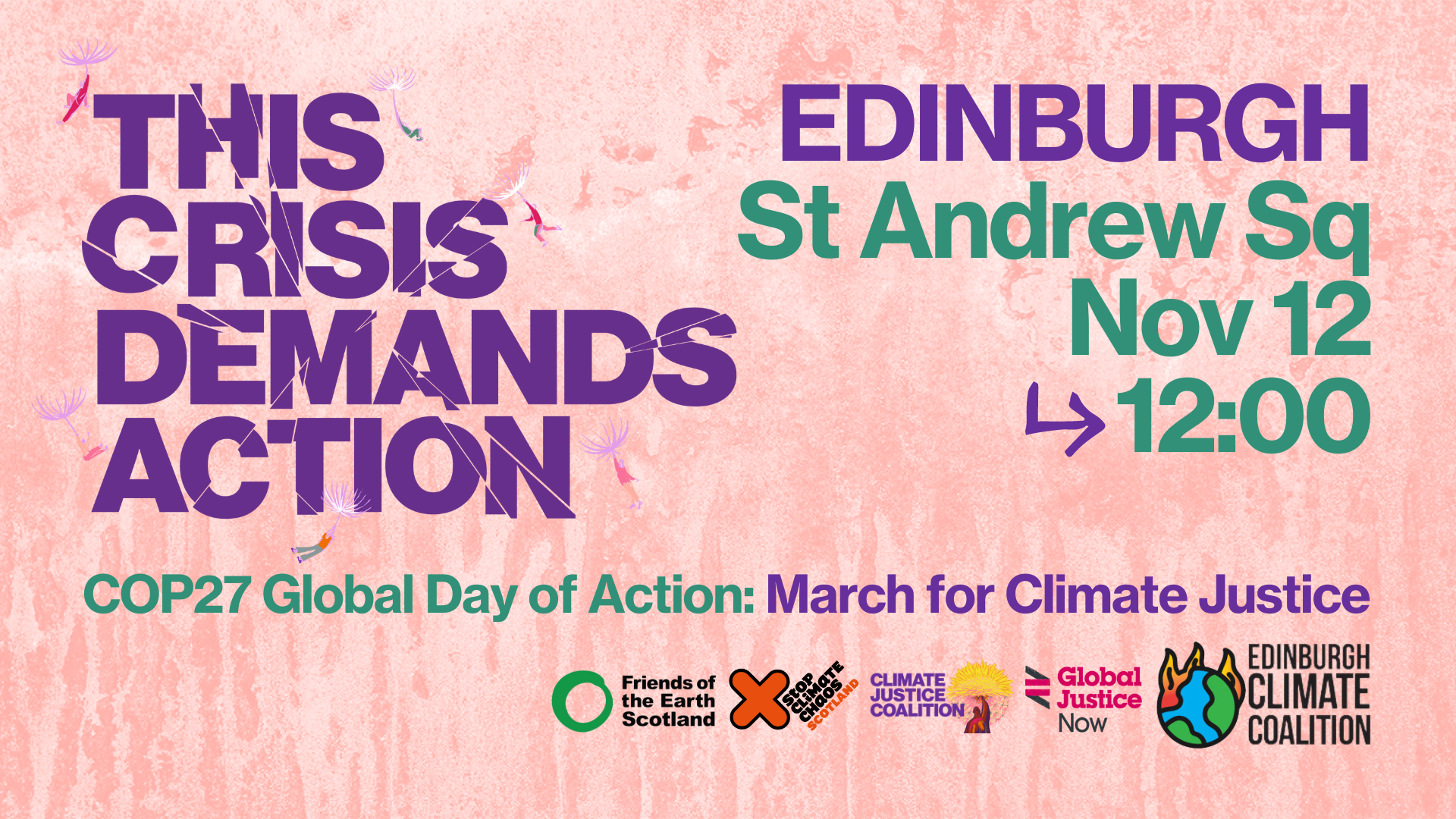 Campaigners released further details of the issues to be highlighted by the Climate Justice March in Edinburgh this Saturday (12/11/22) as part of Global Day of Action during the UN Climate Conference COP27.

The March, which is being organised by several campaign and activist groups, will highlight the corporates, banks and governments who are driving climate breakdown, as well as the resulting impacts on people and places who did not cause this crisis.

The event will also draw attention to the importance of upholding human rights in responding to the climate crisis, here in the UK and world-wide, as the issue of brutal repression of civil society in Egypt, where COP27 is being hosted, comes under the spotlight.

The route of the Edinburgh Climate March will pass six points that highlight different demands for climate justice:.

“We’re joining with thousands of others around the world demanding action from those in power to tackle the interlocking crises of climate, energy and the cost of living. All three are the result of an economic system that puts profit before people’s lives and the health of the planet.

“This profit-driven system is hurting us all – here in the UK and around the world. And countries in the global south are getting hit particularly hard. They’re suffering some of the worst impacts of climate change, despite having played almost no part in causing it, and they’re additionally burdened by enormous debts. Banks here in Scotland are implicated in that – with companies like HSBC, who we’ll be passing as we march on November 12, and BlackRock making big profits from the interest on those debts and refusing to cancel them.”

Since COP26 the UK Government has opened new oil and gas fields, encouraged further exploration and is considering approving the huge Rosebank oil field that contains 500 million barrels of oil.

Campaigners are demanding an end to new fossil fuels projects. Mary O’Brien, a grandmother of 10 who is involved in the Stop Rosebank campaign said:

“If the UK Government were to approve the vast new Rosebank field it would be adding fuel to the fire that is engulfing our planet. Climate science is perfectly clear that new oil and gas is incompatible with the urgent action we need to take to cut climate pollution. Projects like Rosebank only benefit oil companies at a time when they are already making billions in profits and causing widespread harm. “

“Given the urgency and seriousness of the climate emergency, it is unbelievable that we are even having to fight against new oil and gas projects. But thousands of people across the UK and around the world are coming together to stop these climate-wrecking projects and to build that better future. I’m doing this for my grandchildren and for future generations, so that they can have a liveable planet. Join us on the march as we demand a rapid and fair transition away from fossil fuels to reliable, affordable renewables.”

Santander provides billions to some of the world’s most polluting companies. It has pumped $43 billion into fossil fuels since the Paris Agreement despite committing to “net zero by 2050”. Santander also finances the world’s largest meat packing company JBS, who are hugely complicit in Amazon deforestation in Brazil.

Natasha Ion, climate campaigner at Banktrack, said their organisation would be highlighting the fact that world’s largest banks have pumped $4.6 trillion dollars into fossil fuels since the Paris Agreement was signed:

“The climate march will tell banks that they must go beyond burning, and stop financing the extractivism that is wrecking the planet. The fossil fuel industry is one of the main drivers of climate change, and has been implicated in endless human rights violations, primarily against Indigenous communities and those on the frontlines of extraction in the Global South.

“Commercial banks also finance major companies guilty of mass deforestation in regions such as Latin America. The highly polluting meat and dairy industry, with massive business like JBS at the centre, has consistently encroached on indigenous lands and been active in illegal deforestation. Likewise, biomass companies have been accused of land grabbing and causing social conflict in Latin America, while falsely promoting themselves as a “green” fuel alternative.”

“None of this would be possible without key financing from commercial banks, often based in richer countries in the Global North that feel the impacts of climate change far less acutely. ”

Civic participation is essential to solving the climate crisis, and human rights are central to climate justice. Yet around the world, including here in the UK, governments are increasingly persecuting activists, cracking down on protest and restricting civic space.

Civil society activists in Egypt, hosts of this year’s COP, face persecution from one of the most repressive regimes in the world. Demonstrators will demand freedom for all political prisoners unjustly detained by the Egyptian regime, including the high profile case of British-Egyptian blogger Alaa Abd El Fattah who is on hunger strike in prison.

Making polluters pay for the damage that they have caused. Communities in the global south need urgent climate finance and reparations for the loss and damages that have caused mass destruction of lives and livelihoods. This is one of the priority issues for Global South countries at COP27. We will begin the march by demanding action on a global scale for climate justice.

The fossil fuel energy price crisis is driving the cost of living pressures being felt by people across Scotland. Protesters will surround the Scottish Parliament with demands that can be delivered by MSPs. This action will remind the Scottish Government that action they take at home can cut emissions and improve lives such as insulating homes and improving public transport.

The Edinburgh March will be one of over 40 across the UK and Ireland on the Global Day of Action for Climate Justice.

Marchers will assemble at St Andrew Square in Edinburgh at 12 noon on Saturday 12 November.
https://www.eventbrite.co.uk/e/this-crisis-demands-actionedinburgh-cop27-march-tickets-443146361697

For more information about human rights in Egypt visit https://copcivicspace.net/

Global Justice Now is a democratic social justice organisation working as part of a global movement to challenge the powerful and create a more just and equal world.
https://www.globaljustice.org.uk/

Stop Rosebank is a people-powered campaign to stop the development of a huge new oil field in the North Sea by Norwegian-state owned company Equinor.
www.stopcambo.org.uk

BankTrack is an international tracking and campaigning organisation targeting commercial banks and the activities they finance that accelerate the climate crisis, destroy nature and violate human rights. https://www.banktrack.org/