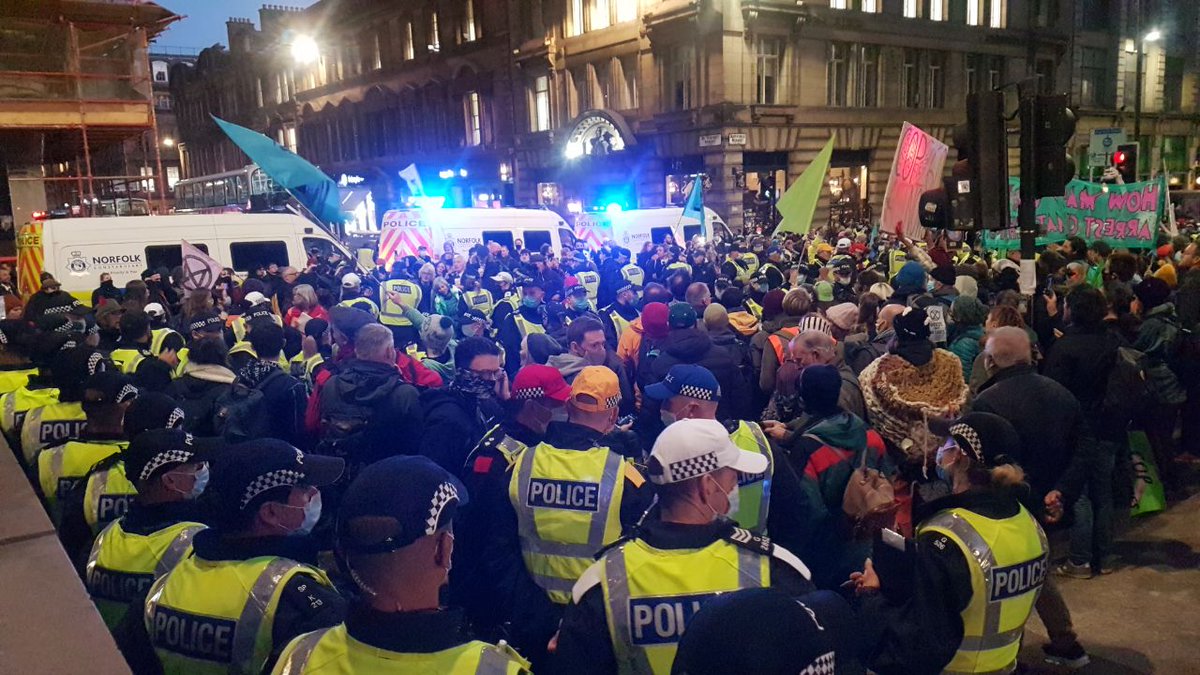 Following numerous incidents of abuse of powers and intimidating tactics by police forces from across the UK gathered in Glasgow for the UN COP26 climate summit, leading civil society coalitions have written to the First Minister urging her to intervene to ensure that the right to protest is upheld and facilitated as movements gather to make their voices heard during the crucial talks.

The letter from the COP26 Coalition, Stop Climate Chaos Scotland and the Climate Coalition highlights “the disproportionately high number of officers deployed, combined with intrusive police surveillance” which has created “an atmosphere of fear and intimidation” and “unacceptable chilling effect on the right to protest.”

Mary Church, Friends of the Earth Scotland on behalf of COP26 Coalition said:

“We are alarmed and deeply concerned about the approach the police are taking to peaceful protest around COP26. As we hurtle ever closer to climate catastrophe and negotiators determine the fate of billions around the world it is absolutely vital that civil society movements from Scotland, the UK and around the world are able to make their voices heard on the streets of Glasgow.

Yet police are using intimidatory tactics and abusing their powers to stifle the fundamental right to peaceful protest. From the rent strikes here in Glasgow to women’s suffrage and civil rights movements around the world, protest has played a vital role in pushing politicians to make the right decisions. As we stare planetary emergency in the face, that role is needed now more than ever.”

“It is crucial that people’s demands for climate justice are heard at COP, and civil society’s participation inside and outside the official spaces is essential for a good outcome. That includes protest, marches and other actions. We are very concerned by some of what we have seen from the police on the streets this week. With the Fridays for the Future march tomorrow and the Global Day of Action for Climate Justice on Saturday, we are seeking reassurance that the police will support and facilitate our right to be heard.”

“It’s incredibly worrying to see over-the-top policing at these climate talks. The vast majority of people in the UK are now concerned about climate change, which is why more of us – from kids to grandparents and everyone in between – are taking action to hold governments to account. The right to protest is a marker of a free, democratic society. Nicola Sturgeon and the police in Scotland need to safeguard the right to protest and protect the rights of the young people, vulnerable and disabled people who are standing up against climate change.”

The Global Day of Action for Climate Justice on Saturday 6th November will involve very large numbers of protesters in Glasgow. Ahead of this, the signatories are calling on the First Minister to ensure that all police forces operating in Scotland commit to:

The letter to the First Minister is available at: https://cop26coalition.org/open-letter-to-nicola-sturgeon-on-policing-at-cop26/

Stop Climate Chaos Scotland is a diverse coalition of over 60 civil society organisations in Scotland campaigning together on climate change.
Our members include environment, faith and belief groups, international development organisations, trade and student unions and community groups.
https://www.stopclimatechaos.scot/about-us/

The Climate Coalition is the UK’s largest group of people dedicated to action against climate change. Along with our sister organisations Stop Climate Chaos Cymru and Stop Climate Chaos Scotland, we are a group of over 140 organisations — including the National Trust, Women’s Institute, Oxfam, and RSPB — and 22 million voices strong. We are reaching across the UK to show our love for all the things we want to protect from climate change, and to ask politicians to put aside their differences and commit to doing whatever is necessary to protect them.
https://www.theclimatecoalition.org/about-us