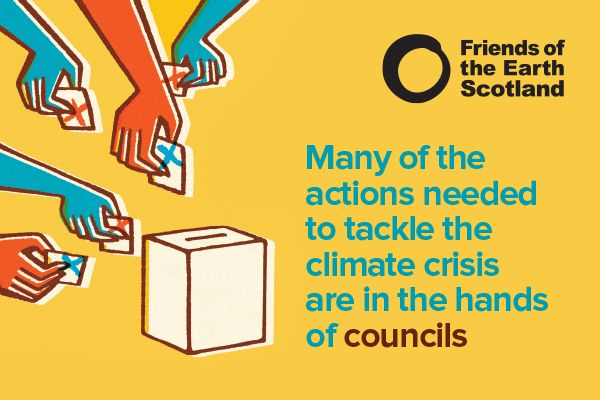 Environmental campaigners say the upcoming council elections are going to be significant in tackling the climate crisis, and are calling on all parties to make policies on transport and waste management a priority.

The councillors elected across Scotland in May will be in their position for five years in what is a vital decade for action to avert climate breakdown. The UN climate conference in Glasgow was a key moment for international action, but the powers held by Councils makes them pivotal when it comes to tackling Scotland’s emissions and building on the legacy of COP26.

Transport is the primary source of carbon emissions in Scotland, making up around a third of the total. While progress has been made in other areas, this has barely changed in the last three decades. Councils have the power to set up publicly-owned bus companies which could make a significant difference here. They also receive funding, which will be increasing in the coming years as part of the SNP and Greens agreement, for cycling and walking, which some councils currently make use of more than others.

Scotland is now burning almost as much of its household waste as it is sending to landfill, while household recycling rates have fallen by 2.9% to 42.0% between 2019 and 2020. This means Scotland now has the poorest recycling rates in the UK. Councils are in charge of designing and providing waste collection systems for households and therefore have a key role to play in reducing the carbon impact of household waste.

Mary Church, head of campaigns at Friends of the Earth Scotland, said: “These elections are being contested against the backdrop of a climate and nature emergency. Many of the powers to drive action on the climate crisis sit with local councils, which is why this vote matters so much.

“Councillors must put people and the planet at the heart of all of the decisions they make. This means making it easier and more affordable to take public transport by running services in the interests of passengers rather than shareholders, helping people to reduce and recycle their waste, and planning for the vital phase out of incineration.

“Over the coming weeks, people can get in touch with candidates to hear what they have to say on these climate-critical issues and build pressure for ambition and urgency at the local level during the next five years.”

Friends of the Earth Scotland has set out a programme of priorities for climate action they want parties to champion, which can be downloaded at: https://foe.scot/resource/a-manifesto-for-local-authorities/