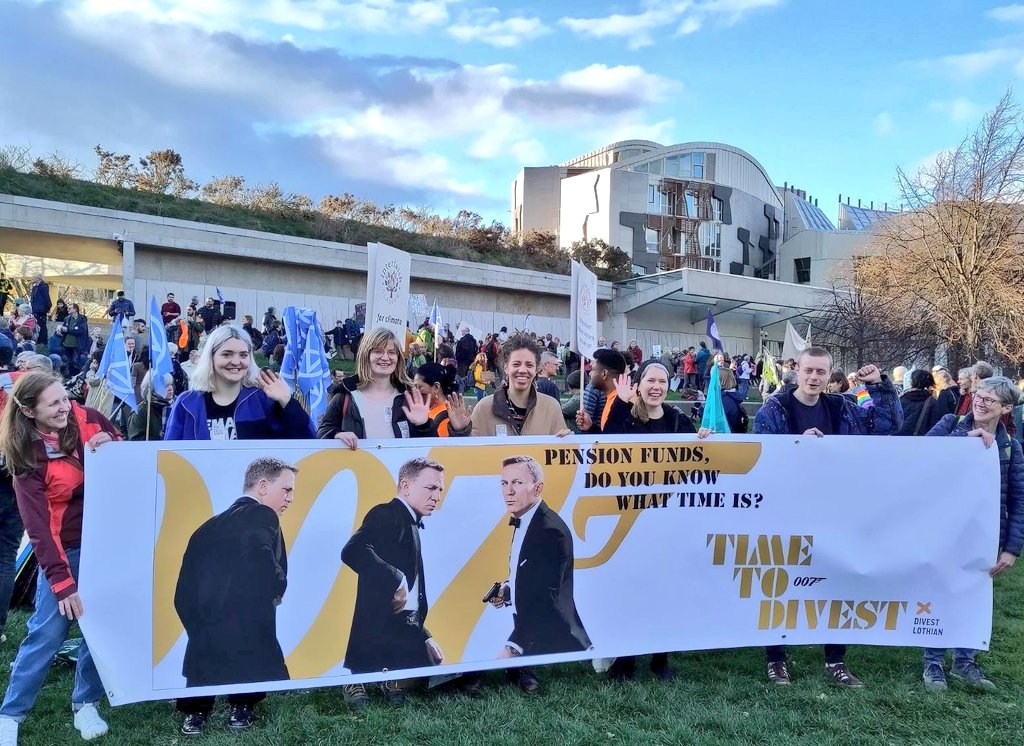 Climate campaigners have welcomed the City of Edinburgh Council’s decision today (24 November) to pass a motion calling on the £8 billion Lothian Pension Fund to end its investments in fossil fuel companies that are driving the climate crisis.

The motion, tabled by SNP councillors Vicky Nicolson and Marco Biagi, and seconded by Adam McVey (SNP), calls on the Lothian Pension Fund to protect the longer-term interests of its members by removing its investments from fossil fuel companies that are not shifting their business toward renewable energy.

The Lothian Pension Fund, administered by The City of Edinburgh Council, invests an estimated £229 million in fossil fuel companies which are driving climate breakdown, including BP, Shell, ExxonMobil and Equinor.

Oil giant Equinor is currently planning to develop the Rosebank oilfield to the west of Shetland – the largest undeveloped oil and gas field in the UK which contains over 500 million barrels of oil.

Eva Gallova, Divest Lothian campaigner from Edinburgh, said: “Edinburgh councillors, having rightly declared a climate emergency in 2019 and committed to becoming a net zero city by 2030, today acted on these promises and showed their constituents that these were not just empty words.

“Divesting the Lothian Pension Fund from fossil fuels would cut the Council’s ties with an industry hell-bent on stymying climate action and taking us on a path which can only lead to more death & destruction. The members of the Lothian Pension Fund, especially the younger members, should have prospects for a future worth retiring into and this will not be possible if our councils continue investing in companies like BP, Shell and Equinor that are planning massive expansions in their climate-wrecking oil and gas production. It’s time for the Lothian Pension Fund to protect pensions and the planet by ending its investments in fossil fuels.”

Sally Clark, divestment campaigner at Friends of the Earth Scotland, said: “It is very encouraging that City of Edinburgh councillors have voted to support ending the Lothian Pension Fund’s investments in planet-wrecking fossil fuels. With the UN Secretary General warning last week at COP27 that we need to massively invest in renewables and end our addiction to fossil fuels in order to keep global temperature rises below 1.5 degrees, it has never been more urgent for councils to break their ties with the coal, oil and gas companies that are on course to trigger climate catastrophe with their expansion plans.

“We now need the Lothian Pension Fund to listen to councillors and invest in climate solutions like social housing and renewable energy that will protect pensions and benefit communities here in Scotland and around the world.”

The Lothian Pension Fund is the second largest local government pension scheme in Scotland and administers the pension funds of over 92,000 members from four local authorities in the Lothians. The pension fund also manages the pensions of 90 employers, including Scottish Water, Edinburgh Napier University, VisitScotland and Heriot-Watt University.

The motion from City of Edinburgh councillors comes as part of a global push to divest money from fossil fuels. To date, 1,552 institutions worth $40.50 trillion have committed to divest, including the Welsh Parliament, the London Boroughs of Islington and Lambeth, Cardiff Council, and 100 UK universities including those of Edinburgh, Glasgow and Aberdeen.

– City of Edinburgh SNP councillor, Vicky Nicolson (Inverleith) said: “Edinburgh’s SNP group are pleased to have brought this motion to mark the need for Lothian Pension Fund to move towards more ethical and sustainable future and acknowledge that there is real financial risk in investment in fossil fuels in the near future.’

– Council Leader and Labour councillor, Cammy Day (Forth) said: “I am pleased that my group (Labour) took the opportunity to join the Green group in supporting the motion. I will be writing to Lothian Pension Fund to make them aware of Edinburgh Council’s position on divestment.”

– City of Edinburgh Green councillor Chas Booth (Leith) said: “Green councillors have been calling for Edinburgh council to support divestment from oil and gas companies for years. I’m delighted that councillors from other parties have now joined our call. Lothian Pension Fund must now listen to this clear call from Edinburgh Council and must stop investing in companies profiting from climate destruction.”

– To date, 100 UK universities have made commitments to pursue fossil fuel divestment: https://peopleandplanet.org/fossil-free-victories