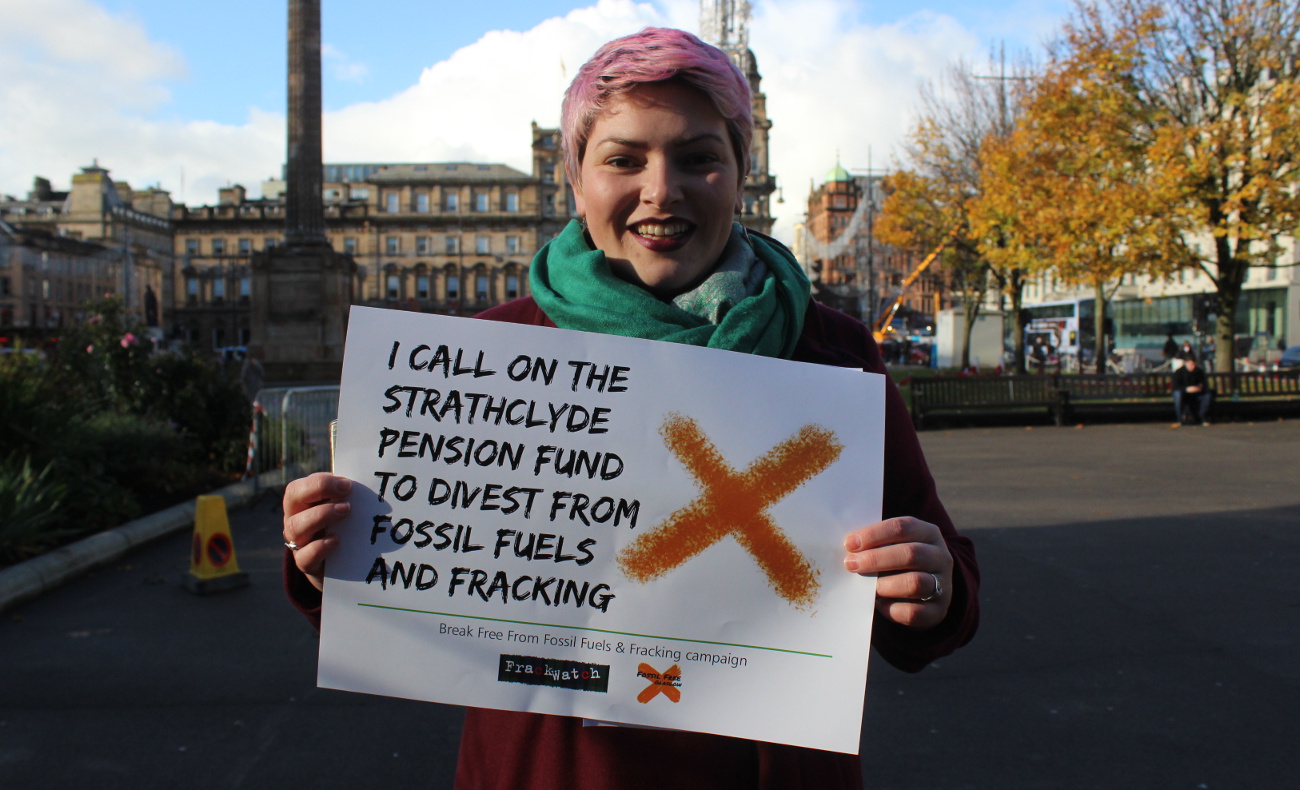 Councillors and local residents spoke out today about the investments of Glasgow Council in fossil fuel and fracking companies.

Glasgow City Council is one of the biggest investors in fossil fuel companies in the UK, with £800 million invested, and £388 million of that in companies that carry out fracking. The money is invested through the Strathclyde Pension Fund which provides pensions to councillors, council employees and associated workers.

Fossil Free Glasgow and Frackwatch asked Councillors at today’s full Council meeting to ‘pledge’ their support for divestment from fossil fuels, calling attention to the environmental harm and financial risks posed by these firms. Councillors Kim Long, John Molyneux, Tanya Wisely and Martin Bartos were the first to give their support.

The recent Intergovernmental Panel on Climate Change (IPCC) ‘Special Report on Global Warming of 1.5C’ was the strongest warning yet of the dangers the world faces if rapid and far-reaching action is not taken by Governments to cut emissions.

All of Glasgow’s MPs have already pledged their support for the Westminster pension fund to divest from fossil fuels, part of a UK wide campaign. Glasgow University was the first university in Europe to divest in 2014.

Ric Lander, Divestment Campaigner for Friends of the Earth Scotland said,
“People across the world are rising up to demand action on the climate crisis and its biggest cause in fossil fuels. It can feel like this problem is far removed from our local communities – in fact many of the companies that are making climate change happen are owned by our our local institutions, pension funds and councils here in Scotland. The good news is that means we can help the world break free from fossil fuels and invest in a brighter future for everyone.”

In Scotland, councils collectively invested a total of £1.81billion in fossil fuel firms – including £972 million of pension fund money in 12 companies that carry out fracking. This is despite the Scottish Parliament voting to ban fracking and many local communities speaking out against the practice – including Glasgow City Council.

Penny Cole concluded: “Our slogan is ‘not here, not there, no fracking anywhere’. It is hypocritical for Councils to oppose fracking for Scotland and then invest in it happening elsewhere.”
The campaigners also want the Council to ensure that the banks it uses for its various accounts are ethical banks that don’t invest in fossil fuels.”