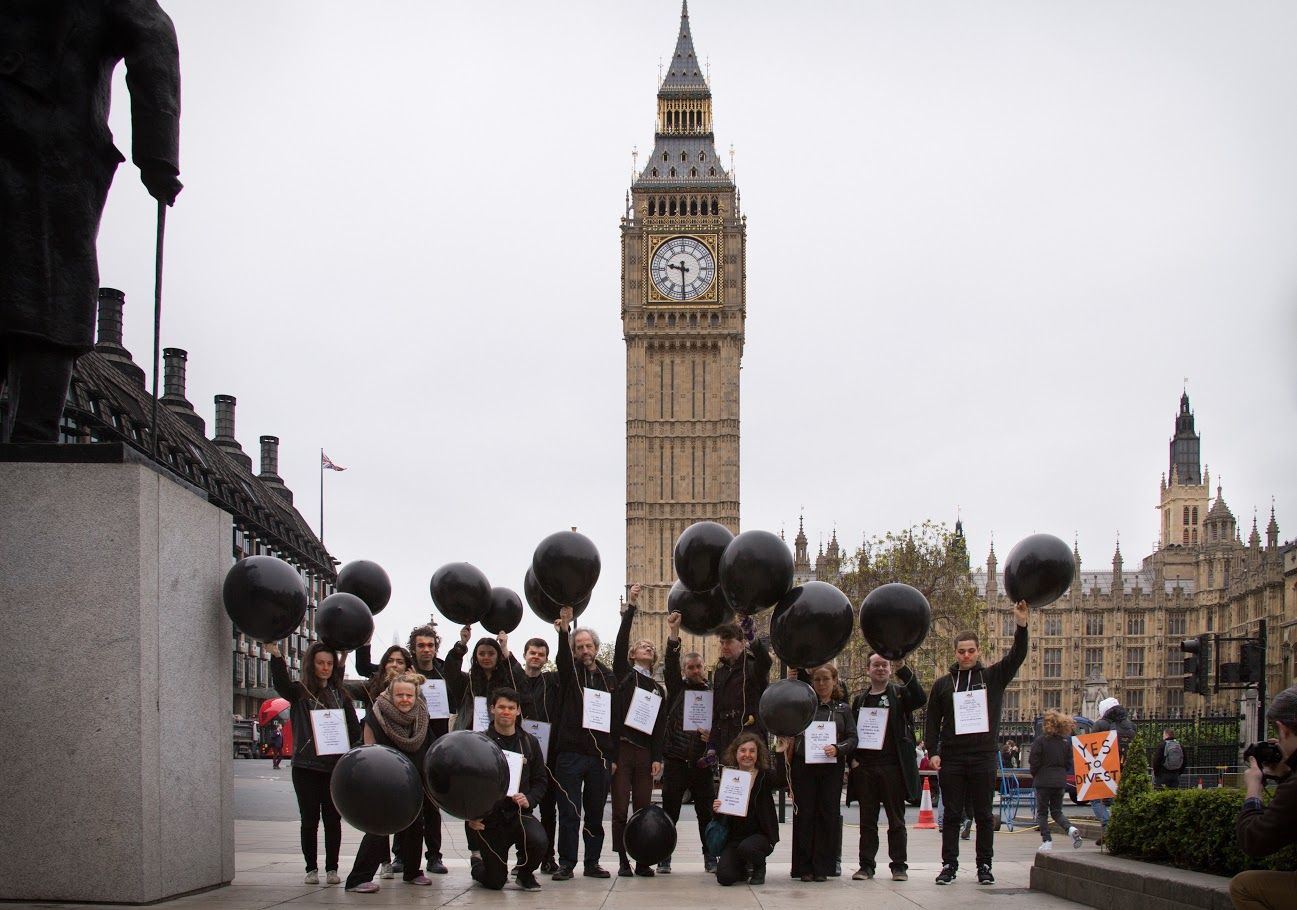 A cross-party group of 200 MPs, including the majority of Scottish MPs, are calling on the MP’s Pension Fund to stop investing in fossil fuel companies, such as Shell and BP, following growing concerns about their role in fuelling climate change.

The Conservative, SNP, Labour and Liberal Democrat MPs and former MPs have signed a ‘pledge’ calling for the MP’s Pension Fund to review and phase out fossil fuel investments [1]. The call follows growing concern among Parliamentarians about the environmental, social and financial risks posed by climate change.

29 out of the 35 SNP MPs have now signed the pledge, including the SNP Westminster Leader, Ian Blackford, Mhairi Black, Angus MacNeil, John McNally, Dr. Philippa Whitford and all of the Glasgow and Edinburgh SNP MPs.

Their support will remind First Minister Nicola Sturgeon of the urgency of climate action as she makes plans to meet other world leaders in Katowice, Poland at the 2018 UN Climate Change Conference [2]. The UN’s own report on limiting global warming to 1.5 degrees demands additional effort from world leaders to enact rapid, far-reaching and unprecedented changes in all aspects of society within the next few years [3].

Mhairi Black, SNP MP for Paisley and Renfrewshire South, said: “Today’s young generation, and their children and grandchildren, will face devastating weather impacts, if we don’t take action now. This means a rapid phasing out of fossil fuels and investing in a progressive and just transition to a zero-carbon economy. Scotland is already leading the way in this: we have set ourselves ambitious climate protection goals, and are rapidly scaling up renewable energy technologies. I am very pleased to unite with my fellow MPs from Scotland and around the country in urging the UK Parliament to show climate leadership and remove their pension investments from fossil fuel companies.”

A growing number of Conservative MPs have also signed, including the Scottish Conservative, Luke Graham, alongside 11 out of 12 Liberal Democrat MPs and over 100 Labour MPs.

Luke Graham, Conservative MP for Ochil and South Perthshire, said: “Climate Change is one of the greatest challenges we face, and we must show leadership on the world stage to reduce global emissions and ensure that we limit temperature increases to 1.5C. This includes supporting the transition from fossil fuels to a low carbon economy. Scotland already has great potential through our infrastructure and expertise to be a world leader in lowering greenhouse gas emissions and creating green jobs. I am therefore delighted to be joining together with my fellow MPs from across the political spectrum in signing the Divest Parliament pledge and in calling for our pensions to be invested in an environmentally sustainable and ethical way.”

Ged Killen, Scottish Labour MP for Rutherglen & Hamilton West, said: “Our pensions are an investment in our futures. It is therefore only right that those investments that seek to ensure a good and sustainable quality of life for us as individuals are also invested in a way that protects the future of the planet that we share. As MPs it’s our job to be an example. That is why I am happy to have signed this pledge to phase out UK Parliament pension investments in fossil fuels.”

Christine Jardine, Liberal Democrat MP for Edinburgh West, said: “The transition away from fossil fuels has never been more important and we need urgent action to cut our greenhouse gas emissions. We have to turn the tide towards strong environmental policy, to stop climate change and protect public health. I am proud to join with 200 fellow MPs in supporting the Divest Parliament pledge and ensuring the UK meets our international commitment to keep global warming below 1.5 degrees.”

The campaign was initiated in 2014 by a small group of MPs including the Green Party MP Caroline Lucas. Their first success was to pressure the trustees of the MPs Pension Fund to disclose its investments and the largest individual holding is in BP PLC [4, 5]. On average, fossil fuel companies dedicate only 1% of their spending to clean energy projects [6].

Caroline Lucas, Green Party MP for Brighton Pavillion, who first established the campaign, said: “We’re now a 200 strong cohort of cross-party MPs who believe it is morally indefensible for Parliamentarians to be investing in companies which profit from wrecking our planet. MPs have a duty to take action to prevent the worst of climate change. One simple step we can take is ditching our investments in fossil fuels – and instead invest in clean, renewable energy, and low-carbon technologies”.

Sally Clark, a Scotland Divest Parliament campaigner, said: “It is extremely encouraging that so many Scottish MPs from all political parties are speaking out about the urgent need to divest from fossil fuels in order to keep global warming below 1.5 degrees.”

Ric Lander, Friends of the Earth Scotland, said: “People across the world are rising up to demand action on the climate crisis and its biggest cause in fossil fuels. We need our leaders to respond to this call, and cleaning up their own pension funds is a great place to start. By going fossil free investors like pension funds can help the world break free from fossil fuels and invest in a brighter future for everyone.”

If successful, the campaign would see Parliament joining the Irish National Infrastructure Fund, the New York State Pension fund and two thirds of UK universities, including Glasgow and Edinburgh, in committing to fossil fuel divestment [7].

FREE TO USE PHOTOS

A selection of high-resolution photos are available to download, rights-free, from this address:
http://bit.ly/div_parl_scot_photos

[1] Pledge text: https://gofossilfree.org/uk/divest-parliament-sign-the-pledge/
Full list of supportive MPs available here:
https://docs.google.com/spreadsheets/d/1Akb_CsDMC0-Ez7KKgcEkLxb956oX3gQEXv2L6x8mJ1A/edit?usp=sharing
The campaign asks the Pension Fund to ‘quantify, review and disclose its investments in carbon-intensive industries, engage in a dialogue with fund members and publicly commit to phasing out fossil fuel investments over an appropriate time-scale.’

[3] The IPCC report outlined that emissions must be reduced at a much quicker rate. This requires rapid shifts away from fossil fuels and massive scaling up of investment in renewables, coverage in The Guardian:
https://www.theguardian.com/environment/2018/oct/08/global-warming-must-not-exceed-15c-warns-landmark-un-report

[4] In March 2017, it was revealed that the MPs Pension Fund invests in fossil fuels, tobacco and tax avoiders, coverage in The Independent:
https://www.independent.co.uk/news/uk/politics/mps-pension-scheme-investment-tobacco-cigarette-bat-fossil-fuels-tax-avoidance-a7607901.html

[6] A recent report by Carbon Disclosure Project revealed that on average, fossil fuel companies allocate just 1.3 per cent of their total 2018 capital expenditure to green energy projects, coverage in The Financial Times (£): https://www.ft.com/content/56100cb2-e5a6-11e8-8a85-04b8afea6ea3

[7] To date, over 900 institutions across the globe – representing funds worth over $7 trillion – have made some form of divestment commitment. Full list of commitments available: https://gofossilfree.org/commitments/

[8] Divest Parliament is a campaign working with MPs from across the political spectrum to address the moral and financial risks related to their pension investments in fossil fuels. It pushes for responsible investment practices and to reduce the MPs pension fund’s fossil fuel exposure over an appropriate timescale – http://divestparliament.org/

[9] Friends of the Earth Scotland is:
* Scotland’s leading environmental campaigning organisation
* An independent Scottish charity with a network of thousands of supporters and active local groups across Scotland
* Part of the largest grassroots environmental network in the world, uniting over 2 million supporters, 75 national member groups, and some 5,000 local activist groups.
www.foe.scot

Patrick Grady, SNP MP for Glasgow North and SNP Chief Whip said: “The damaging effects of climate change are already being felt here in Scotland and across the globe. Now more than ever we need to take action to reverse global warming and protect our environment. This includes our investment decisions and it is only right that pension funds – especially those which manage public money – should always seek to invest ethically.”

Deidre Brock, SNP MP for Edinburgh North and Leith and Shadow SNP Spokesperson for Environment and Rural Affairs said: “In the light of the recent IPCC report, it is clear that we need to take immediate action to keep global temperature rises below 1.5C. This includes taking a more ethical approach to investments and supporting the just transition from fossil fuels to renewable energy. Scotland is already setting ambitious targets to reduce emissions in our new Climate Change Bill and I am pleased to join my fellow MPs from across the political spectrum in supporting the Divest Parliament campaign as we move towards a sustainable green economy.”

Joanna Cherry QC, MP for Edinburgh South West & Shadow SNP Spokesperson for Justice and Home Affairs, said: “I am extremely proud of the Scottish Government’s ambition on tackling climate change; we urgently need to cut our greenhouse gas emissions in order to keep global temperature rises below 1.5 degrees and prevent the devastating impact of runaway climate change. I am calling on the trustees of the UK Parliament’s pension fund set an example and I am delighted to join 200 of my parliamentary colleagues in supporting the Divest Parliament pledge”

Chris Law, SNP MP for Dundee West & Shadow SNP Spokesperson for International Development said: “Climate change is not only real but will cost countries across the world hundreds of billions pounds and devastate millions of lives if we fail to act now. As MPs we must reflect on this, and urge change now, including investment instead in renewable energies and new cleaner and more sustainable technologies. I am attending COP24 in Poland to find out how Scotland’s leading role can influence the world in reducing greenhouse gas emissions and am proud to join with my fellow MPs in calling for our parliamentary pension fund to move towards a zero carbon economy by divesting from fossil fuels.”

Jo Swinson, MP for East Dunbartonshire, Deputy Leader of the Liberal Democrats, said: “I am pleased to join MPs from across the political spectrum in supporting the Divest Parliament pledge and calling on the Trustees of the Parliamentary Pension Fund to move their investments away from carbon-intensive industries. In his speech [yesterday] at the UN Climate Conference, Sir David Attenborough was right when he said that humanity is facing its greatest threat in thousands of years. The dangers of climate change are urgent: for people in some parts of the world, it can already be a matter of life and death. All of us in the UK must do our bit to help cut carbon emissions and ensure we meet our targets in the Paris Agreement. This is bigger than politics: the future of our planet depends upon it.”