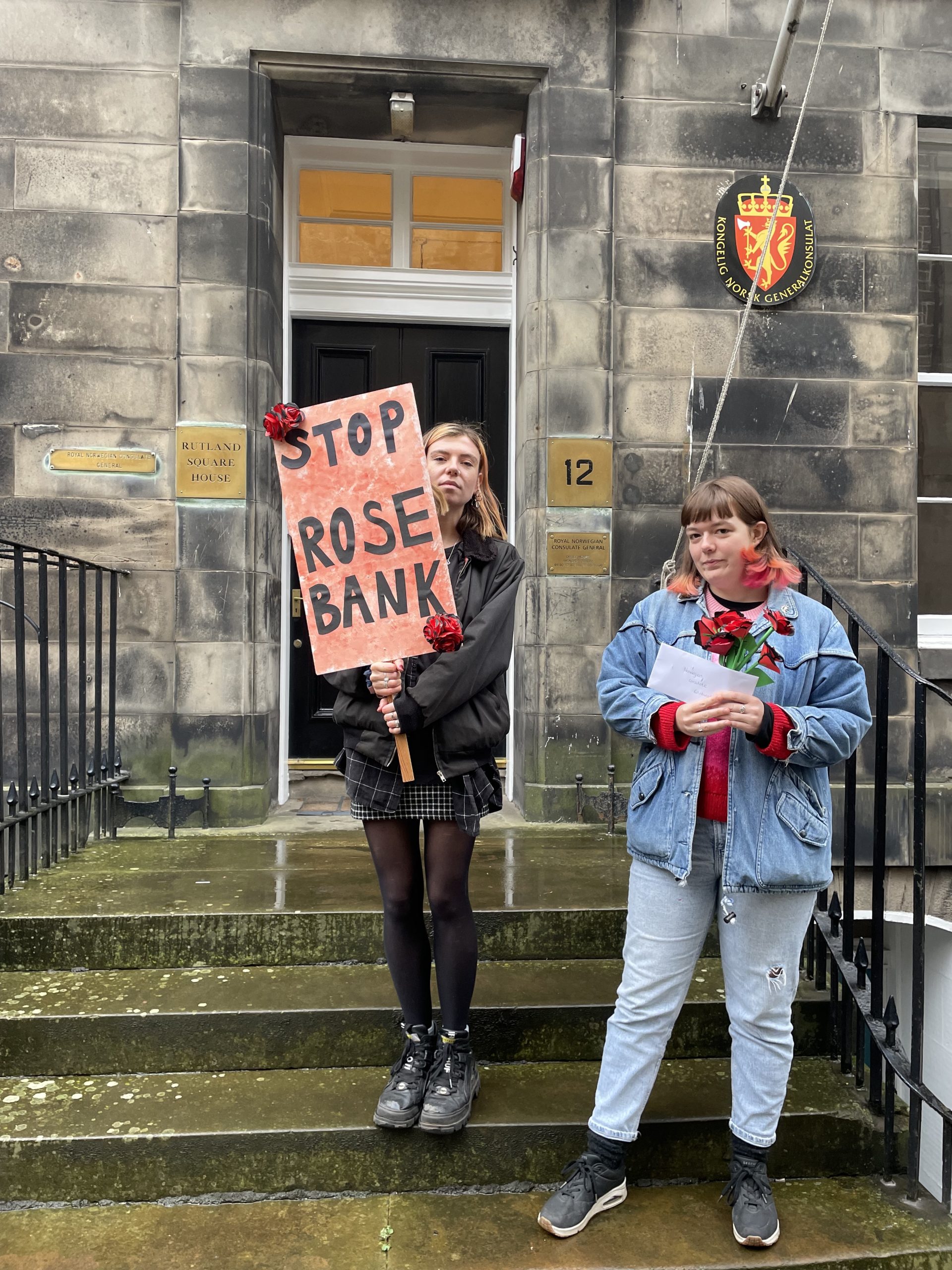 Environmental campaigners have been highlighting companies and groups connected to Norwegian oil giant Equinor by delivering roses in order to expose their toxic relationships with the proposed Rosebank oil field.

Free to use images available at: https://drive.google.com/drive/folders/1NrIg9mA6p8HF2LU1_Myg4q2eDNS8pJNc

Yesterday (2/11/22) campaigners delivered bunches of ‘oil’ covered roses to locations in Glasgow and Edinburgh representing some form of financial or political influence over whether the Rosebank oil field goes ahead. These included the Norwegian consulates in both cities; the UK Government building, Barclays bank and the First Minister’s residence Bute House in Edinburgh; and Glasgow City Chambers.

Rosebank contains over 500 million barrels of oil, which if burned would produce the equivalent CO2 emissions of 28 low-income countries combined. Ahead of the COP27 climate talks, the UN has warned that the world was on course for a catastrophic 2.8C of climate warming by the end of this century. The UN report ‘The Closing Window’ demanded that emissions should fall 45% by 2030 if we are to stay within agreed climate limits.

Analysis has shown that developing the Rosebank field will cost UK taxpayers over £100 million, due to a deliberate loophole in the UK Government’s windfall tax. Equinor recently declared profits of £21 billion for the third quarter of 2022.

“Equinor is propped up by governments, investors and pension funds, but by drawing attention to these toxic relationships we can undermine their reputation and highlight the dangers posed by the vast Rosebank project.

“Today’s deliveries show that support for Equinor and Rosebank is all around us, and these links must be broken if this climate-wrecking development is to be stopped.

“Climate science is clear that the development of new oil and gas fields will take us even further past safe climate limits. Lending financial or political support for new fossil fuels is climate denial.

“Governments, banks and investors urgently need to redirect support away from the fossil fuel industry that is driving the death and destruction across the world and instead invest in ramping up affordable, reliable renewable energy.”

BankTrack profile of finance and underwriting supplied to Equinor: https://www.banktrack.org/company/equinor#financiers