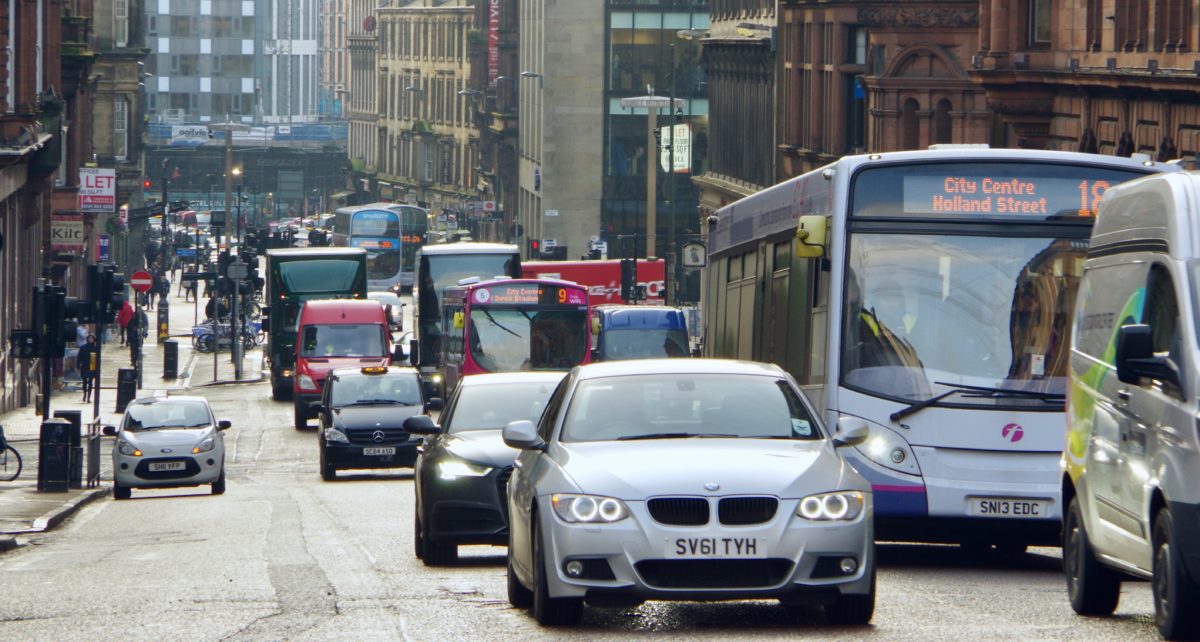 Scotland’s Most Polluted Streets for 2017 Revealed

A new study by Friends of the Earth Scotland ranking the country’s most polluted streets confirms that air pollution remains a public health crisis plaguing Scotland.

A Low Emission Zone will be launched in Glasgow by the end of this year, followed by three more in Dundee, Edinburgh, and Aberdeen by 2020. The campaigners urged Glasgow City Council to ensure that its planned Low Emission Zone restricts the most polluting buses, vans and lorries by the end of this year, and for cars and taxis to be restricted by 2020.

“Once again, streets in Scotland have dangerous levels of toxic air pollution which are breaking legal limits. The situation across Scotland is potentially showing some slow signs of improvements but filthy streets continue to poison our lungs nearly a decade after a legal deadline.

“Scotland’s first Low Emission Zone will be in Glasgow by the end of this year, and this will be an important test of commitment to address this problem. The rest of Scotland is looking to Glasgow to set a high standard with its Low Emission Zone. Glasgow City Council must ensure that its proposed LEZ restricts the most polluting buses, vans and lorries by the end of this year, with cars and taxis restricted by 2020.

“Air pollution from traffic fumes has a devastating impact on health, especially on children and people with existing health problems. It is responsible for over 2500 early deaths every year in Scotland and costs the Scottish economy over £1.1 billion annually. Air pollution has been linked with heart attacks, strokes, and cancers and can also inhibit children’s lung development. It is unacceptable to have continued levels of pollution on our streets that are harming our children’s prospects in life.

“Last year the Scottish Government announced it would roll out Low Emission Zones in all our big cities. Low Emission Zones will make a real difference and will improve the health of children growing up in polluted areas. These Zones must be ambitious in their design, apply to the right vehicles and be supported by measures to make public transport, walking and cycling the smarter choice for everyone.

“Our society is far too car dependent. The Scottish Government and local councils should work together to promote sustainable transport alternatives like walking, cycling, and public transport. Only then will we see the step change we need to improve our health and adequately tackle the devastating silent killer that is air pollution. The sun needs to set on petrol and diesel cars, and fast, if there is to be an end to air pollution.

The results of Scotland’s most polluted streets for 2017

Top 6 most polluted streets for Nitrogen Dioxide in 2017:

The European Ambient Air Quality Directive set a limit for NO2 of 40 microgrammes per cubic metre, so all these sites are breaking the legal limit. The deadline for compliance was 1 January 2010.

Top 6 most polluted streets for Particulate Matter in 2017

The Scottish annual statutory standard for PM10 is 18 micrograms per cubic metre, so all these sites are breaking the standard. The deadline for this standard to have been met was 31st December 2010

1. These results were exclusively published by the Sunday Herald on Sunday 21 January 2018.

2. Regionally specific quotes are available on request, and print quality photos of Hope Street Glasgow and the people quoted, along with infographics are available at https://www.flickr.com/gp/friendsoftheearthscotland/9067W3

3. We analysed data from the Automatic Monitoring Stations around Scotland and results were published after discussion with air quality specialist consultants at AEA Ricardo, who manage the sites. Data have been ratified from January 2017 – September 2017. We have only included data with 65% data capture and over. The monitors were a combination of roadside and kerbside monitors. It should be noted that at different sites, exposure levels to the general public will be different. There were suspected illegal levels of NO2 at the site for Rutherglen in South Lanarkshire but these results were eliminated due to uncertainties over the data following a sampling fault.

5. Nitrogen Dioxide is poisonous gas caused by burning of fossil fuels in car engines. Exposure to NO2 is known to be linked to increased mortality and respiratory problems. Nitrogen dioxide inflames the lining of the lung and reduces immunity to lung infections such as bronchitis. https://www.londonair.org.uk/LondonAir/guide/WhatIsNO2.aspx

6. Particulate Matter are tiny, often invisible particles in the air.  Particles originating from road traffic include soot from engines, small bits of metal and rubber from engine wear and braking as well as dust from road surfaces.  They can penetrate the deepest part of the lungs and damage our health.  The World Health Organisation advises that there is no safe level of exposure to Particulate Matter

7. Low Emission Zones are areas where the most polluting vehicles must stay out or pay a fine. They have been shown to reduce pollution in many European cities. London has had a LEZ since 2008 and plans to extend it.

8. Last year, we welcomed the Programme for Government as the Greenest Ever, in part due to its ambition to introduce 4 LEZs by 2020 in Scottish cities to tackle illegal air pollution. https://foe.scot/press-release/prog-govt-2017-reaction/

11. Friends of the Earth Scotland is: