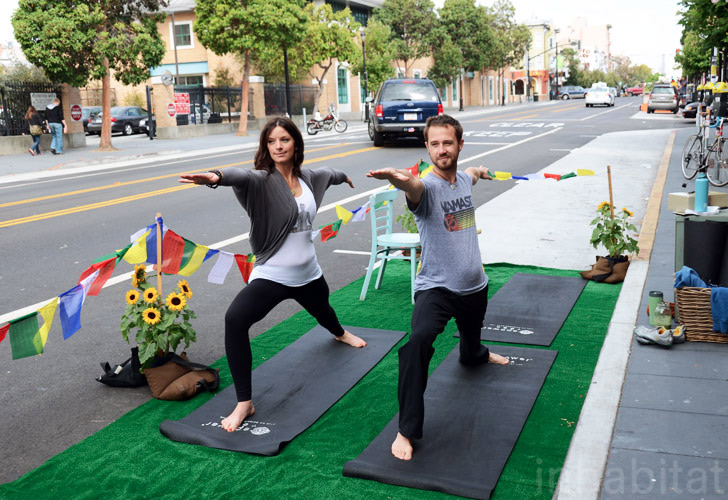 Pop Up Parks show potential to reclaim the streets

Members of the public will take over 20 car parking spaces in Edinburgh today to create a vibrant, fun ‘Pop Up Park’ ahead of National Clean Air Day. Activities include a yoga class, singing workshop, juggling, hula hooping alongside arts and crafts and a kids area.

The pop up park takes place on George Street which lies in Edinburgh’s city centre Pollution Zone, where air quality safety standards are regularly breached. Event organisers Friends of the Earth Scotland highlight the pop up park is designed to showcase the need for a redesign of city centres so that walking, cycling, and public transport are given more priority in urban spaces.

Air Pollution Campaigner for Friends of the Earth Scotland, Emilia Hanna said:
“Ahead of National Clean Air Day we are taking over parking spaces to reimagine city space and showcase a vision for a future where we have less parking and more space for people.

“Traffic is the key culprit to Scotland’s air pollution crisis. Cars take up way too much space in our towns and cities causing pollution, congestion, and can make us feel unsafe to walk or cycle in some areas. Politicians, planners and the public need to make a bold and loud challenge to the dominance of the private car in our urban environment.

“As populations grow, there will be an even greater need to prioritise space-efficient modes of transport. One full bus can take up to 75 cars off the road. Ten bikes can be parked in just one car parking space. We are here to say that clean transport needs to be given a fairer chance in our cities.

“In the days around Clean Air Day this June, street closures in Edinburgh and Glasgow will allow people to experience their cities with less pollution and traffic.
It is wonderful to see the public coming together to show that if cities were designed for people and not cars, we’d have cleaner air, vibrant streetscapes, thriving local business, and lower carbon emissions. Together we can showcase how brilliant, healthy and inspiring our city centres could look if they were car-free.”